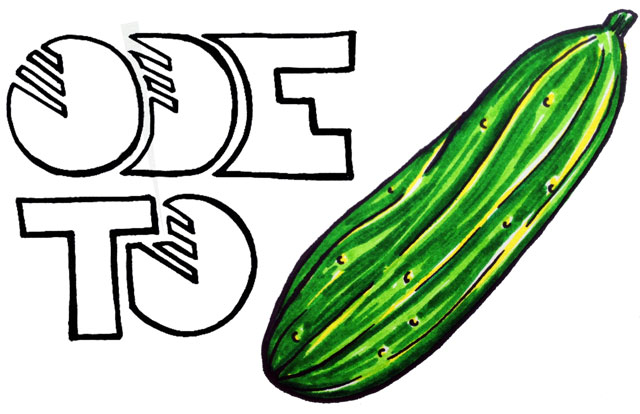 In the summer, I’ll often find myself too lazy to move, never mind cook. So unless someone’s firing up a barbecue on my behalf, I just wanna shove something int my face that’ll satiate my hunger while making me forget that people are frying eggs on their sidewalks. While some people look to watermelons to cure those cravings, I prefer something a little bit greener. But as it turns out, cucumbers aren’t that far off from melons.

Fruits and vegetables are funny things when it comes to botanical classification. We eat them one way, tax them another and call them something completely different. So while tomatoes turn out to be berries and pineapples turn out to be a giant cluster of fruits, this fun classification means your cuke is actually a type of gourd. The Cucurbitaceae family contains everything from your squashes to cucumber to melons to chayotes to your big ol’ Jack O’Lantern. Most of these plant pals fruits’ have a familiar shape and a rarely spoken name. Their pepos are encased in a relatively thick rind with a fleshy wall trapping the seeds in the center. Which means deseeding is a breeze and requires little more than splitting and scooping.

While cucumbers are high in fun things like water, Vitamin A, Pantothenic Acid, Magnesium, Phosphorus and Manganese, Vitamin C, Vitamin K and Potassium, they can also come with cucurbitacin, a notably bitter compound. Certain varieties like English cukes have managed to breed out the bitterness, but if you bought a bushel of cucumbers and can’t stand the taste, there’s hope! Peel off the outer skin as the compound concentrates in the skin, not in the flesh. It’s also more abundant in the stem end, so lop it off and save it for your dog or compost pile. Cucurbitacin’s produced in response to stress, so try to pick uniform specimens without any odd colouring or shapes that implied they had a difficult childhood. And if you happen to be growing your own cukes, let them live happy lives and you’ll be rewarded with a sweeter harvest.

Even though they all seem long and green, there are three major classifications when it comes to cukes. 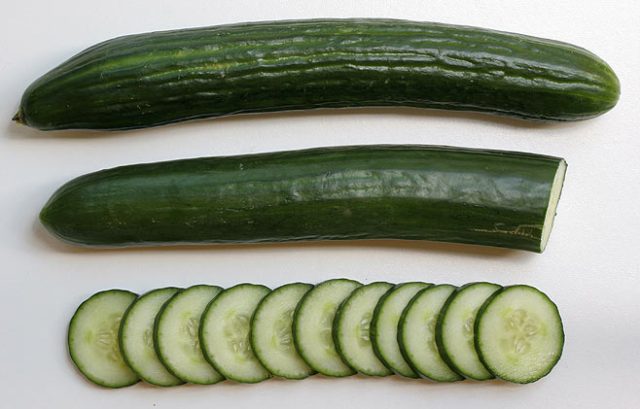 Slicing cucumbers (ie. English) are the IKEA LACK table of the cuke world. They’re bred for transportation, meaning they’re uniform and stackable with thick skins to prevent water loss. Farmers make them even more market friendly by waxing or shrink wrapping them to extend shelf life. And just like the LACK, they’re fucking everywhere. 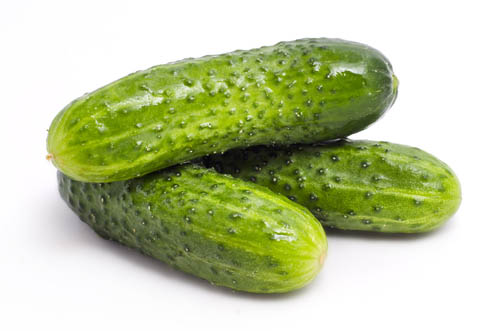 Did you know those bumps were thorns?  via Pollinator

Pickling cucumbers are shorter and squatter than slicing cukes and only show up during the summer months. They have thinner skins to allow for better brine penetration, but because of this, they don’t keep as well in your fridge. Which is fine, because the world needs more pickles anyways. 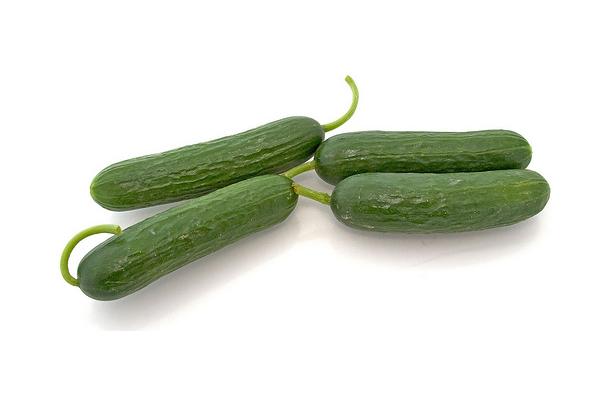 Burpless cucumbers (ie. Persian or Japanese) claimed their name by breeding out the bitter cucurbitacin, which happens to cause indigestion for some unlucky people. These relatively seedless cucumbers are sweet with thinner skins, so they tend to dry out after a couple of days. But their mild, sweet flavour means you’ll have no trouble eating through a dozen in a sitting.

When it comes to eating cucumbers, my default stance is shoving them into my face in a constant stream like one of those recalled Cabbage Patch Snacktime Kids Dolls. Given their high water content and mild flavour, they’ll keep you refreshed and hydrated when the temperature starts to climb. I’ll always default to a fresh summer salad, but there are more ways to beat the heat when you’re armed with a cucumber. 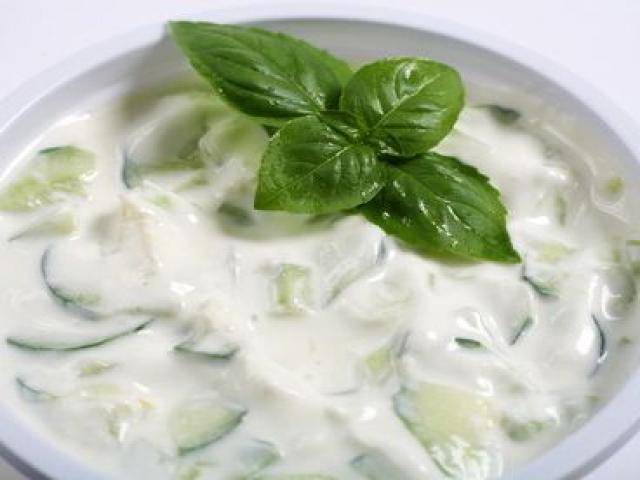 Yogurt I know that hummus is the go-to dip for this generation, but I lean towards tzatziki when given the chance. The bright flavours of lemon,  yogurt and cucumber  feel light compared to hummus’s earthy richness. I like my tzatziki to have more shredded cucumber than yogurt, a good bit of lemon, more garlic than advisable, salt (of course) and a little bit of white pepper. Just be sure to squeeze out all of your cucumber juice so your dip doesn’t become a drip. And don’t throw it away either!

Water I always used to think that cucumber water was some type of weird spa beverage and my opinion hasn’t exactly changed. You can skip the facial and make your own by adding a few slices to a pitcher or a few tablespoons of the reserved cucumber juice straight to your glass. 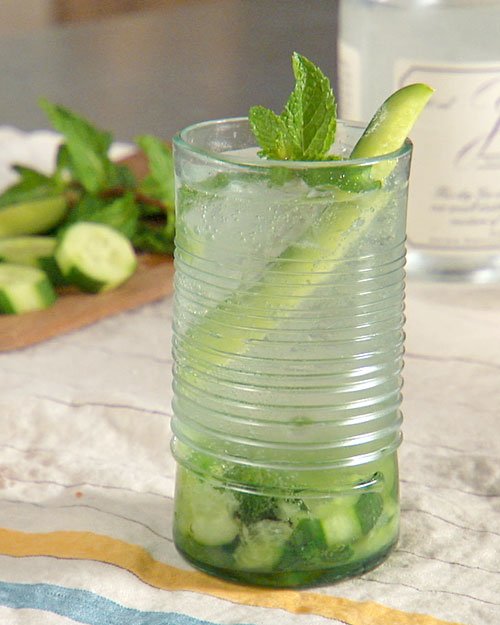 I just want Martha Stewart to constantly feed and hydrate me.

Gin Cucumbers are nature’s swizzle sticks and we all need to embrace that coincidence since their fresh, grassy nature makes everything taste like summer. You can choose a cucumber-infused gin like Hendricks, or make your own if you feel like saving a few bucks. Muddle a few bits of cucumber next time you’re making a gin and tonic, add some leftover cucumber juice to a cocktail or go all out with a Pimm’s cup. Just be sure to add a few as stir stick snacks.

Melon Given that they are part of the same family, it’s no surprise that melon and cucumber work well together. Even though the pairing is more popular at Bath and Body Works than on your plate, you can use it as a starting point for fresh salads or salsas. Mix together some honeydew, mint and feta with your cukes or top some of your grill offerings with cucumber and cantaloupe. Or blend some with a watermelon and make your own popsicles. 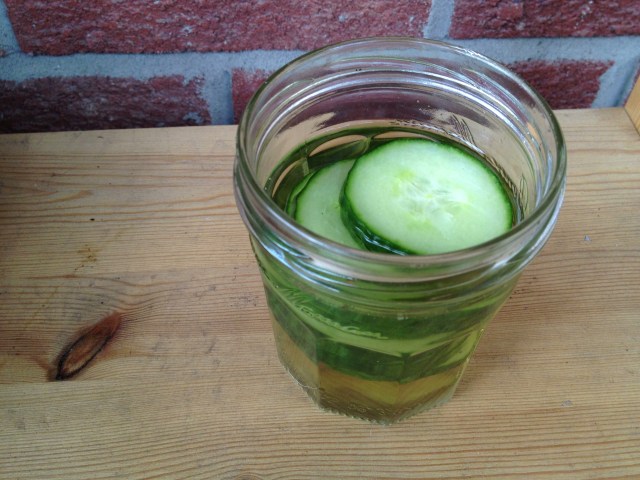 Pickles Pickled cucumbers are obvious, but overnight refrigerator pickles are slightly less so. In an ideal world I’d have a four gallon pickle crock and the time to ferment them, but sometimes you just want pickles now. I like to make a light pickle with a mild brine of rice wine vinegar, salt, sugar and water to see me through the summer months. Since the brine isn’t that acidic, you’ll need to eat them pretty quickly before they spoil, but that shouldn’t be a problem.