Whenever I look up news on queer issues, I feel like I’m reading the same article again and again.

On Monday at a Princeton talk, Associate Justice Antonin Scalia of the Supreme Court defended his decisions condemning homosexuality. Scalia repeated his point that banning sodomy was morally on par with banning bestiality and murder.

Whenever I look at ludicrous coverage like this, I have to to double check that I’m not reading Mad Libs. They are just as nonsensical but sadly not as funny. All you have to do is find a homophobic story, remove a few specifics and you’re left with a news template for the next decade or so.

Or you can translate it and use it to interpret all of your French news! Hollande has reiterated that he will take the draft bill to parliament in January, but you know that someone’s going to protest before then.

Look how easily you can write the news! Same-sex marriage is coming soon to a UK near you, so of course there’s trouble. Even though Culture Secretary Maria Mille, made a “quadruple legal lock” to protect religious groups and made it explicitly clear that said religions were banned from performing same-sex marriages because they really don’t want to, some old dudes still got their boxers in a knot.

In (England), (a spokesperson) of the (Coalition for Marriage) came out against (same-sex marriage). (The writer) argued that they are not homophobic, but they just want to protect (Christians, Jews, Muslims and others) from the (legal nightmare) of seeing gay people (redefine marriage).

In (Scotland), (Rev Alan Hamilton) of the (Church of Scotland) came out against (civil partnerships or same sex marriage). (Hamilton) argued that they are not homophobic, but they just want to protect (religious bodies and ministers and people of faith) from (getting hurt) by seeing gay people (get gay married).

I never know if I should laugh or cry anymore. On one side of things I could have a career ahead of me as The Most Depressed Clairvoyant Ever or I could continuously beat my head against a wall with each irrational argument. Given that everyone uses the same “logic” to come out against gay rights, why not make news into a game? Nothing lightens up a white-knuckled homophobic debate like a rousing game of Bingo! 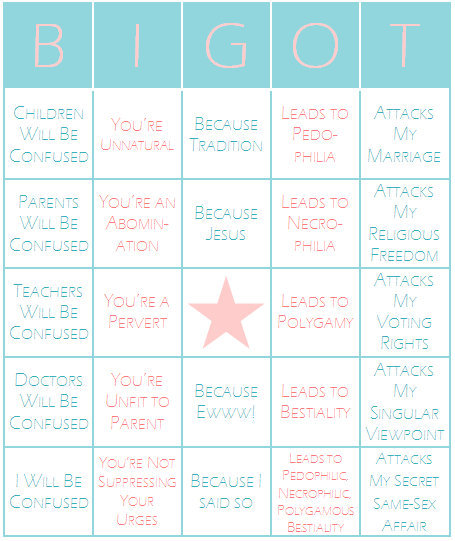 Just keep a card in your pocket so the next anti-gay discussion is a little bit more bearable. Accidentally turned on Fox News? BINGO!  Checking in on Bryan Fisher? BINGO! Watching conservative news coverage of France’s December 16th rallies for same-sex rights? BINGO! Have to hang out with some Conservative family members and eat a turkey? BINGO!

Who knew oppression could be so fun?