France! The land of manifestations! The land of progress! The land of changing language to better reflect people’s roles as humans instead of sexes. For this entire week, French citizens have taken to the streets over gay marriage and adoption, proudly carrying pink placards.

That sounds fantastic! That sounds wonderful! That sounds like President François Hollande’s promise to make same-sex marriage and adoption a reality for 2013 will hold true!

But wait, did you read the signs? 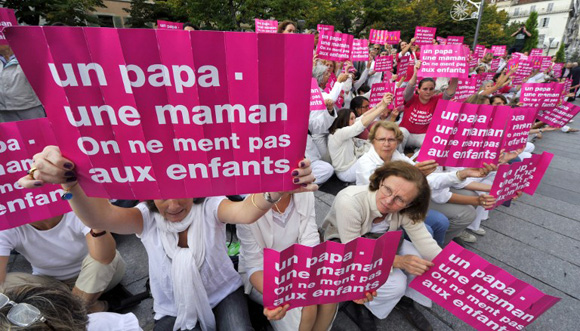 One Daddy, one Mommy, we shouldn’t tell lies to children.

I wish that I was completely mistranslating their message, but as it turns out, those rosy signs are being held by our adversaries, not our allies.

The VITA Alliance, France’s answer to NOM, is the group behind this week’s manifestations. Founded by Christine Boutin in 1993, the group claims to “promote the protection of human life and the dignity of every person.” They espouse the importance of equality and sexuality in a couple’s longevity, but only when it applies to strict gender roles in heternormative couples:

“To tell a child it has two daddies or two mommies is telling a lie. You should never lie to a child. Children have a right to know their origins, they have a right to a daddy and a mommy and not respecting that when they are already hurt through being orphans is just adding further mistreatment.” — Tugdual Derville, VITA Alliance’s general delegate.

In a series of 75 protests throughout the country, folks took to the streets to force their opinions down the throats of their fellow citizens. You see, children should be protected at all costs, even if it’s to the detriment of the family as a whole. Depending on which region you watched on Tuesday, men and women dressed in pink/green or black/white to represent the “need” for opposite-sex parents in a child’s life. And that guy inexplicably running around in the spandex body suit and cardboard wings, pretending to be the baby bird?

Not one of our team, but someone actually pushing the anti-gay marriage agenda! I’m pretty sure this is the first time I’ve ever seen silver spandex used for evil. (If you actually manage to watch the entire video, please let me know what their interpretive dance was trying to say.)

The newly-sworn-in Socialist party was set to push forward amendments for same-sex marriage and adoption earlier this month, but the caterwauling opposition has caused parliamentary action to slow. Instead of debating the issue on October 31st, the proceedings have been delayed until January 2013. This “reflection time” is supposed to allow for more deputy consultation and time for the heated arguments to cool off, but will this happen? The approval rating for same-sex marriage and adoption has declined and the only bellowing voices belong to bigots. Keeping in line with conservative parties around the globe, people are still shouting about the “dangers” and “consequences” of giving same-sex couples civil rights.

“[A]nd why not have unions with animals? Or polygamy?” — Brigitte Barèges, mayor of Montauban.

“This could have innumerable consequences. Afterward they will want to create couples with three or four members. And after that, perhaps one day the taboo of incest will fall.” — Cardinal Philippe Barbarin, the Archbishop of Lyon

The funny thing is, they’re kind of correct about the way same-sex families do differ: when more than two people are involved in creating a child, the dynamics have to change. No longer is the world limited to just mommy and daddy; there are step-parents, sperm donors and other adults who play a role in a child’s life. However, unlike the polygamist scenario they fear, these sprawling families can be a good thing. 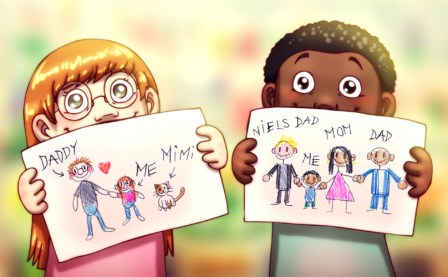 The Netherlands was the first country to legalize same-sex marriage over a decade ago and now they’re talking about extending benefits to all of the members in those families: “The justice ministry is going to investigate and see what the possibilities are for recognizing three parents or more per family,” said ministry spokesman Wiebe Alkema to the AFP. The Dutch simply want to acknowledge all of the people that come together to bring a new life into the world. Green MP Liesbeth van Tongeren also supports the change:

Currently parenthood in the eyes of the law is almost always the consequence of biological parenthood. This does not represent the diversity of families in the Netherlands. Often enough, the father of a child with lesbian parents also plays a role in the life of the child. How a family lives is more important than the biological lineage. The bill should take into account what’s best for all concerned.

Time and time again we’ve learned that gay parents don’t make bad parents – bad parents make bad parents. Same-sex marriage hasn’t hurt the Netherlands, Canada or anywhere else. If there’s a bit of hope in this situation, the “reflection” period and postponement of the discussion until 2013 will allow everyone’s opinion to be heard. Some bigotry is expected, but same-sex supporters are also hopeful that they’ll get a chance to truly show how normal queer households are. This’ll give the children of these couples an opportunity to come out of the woodwork to defend their parents’ rights. I’m sure the VITA Alliance would support me when I ask, “Won’t anyone think of the children?”

In my experience as an elected official, I have seen so many children whose mother or father have abandoned them, who are unhappy, and sometimes even tortured. My priority in terms of adoption and marriage is happiness.” – Martine Filleul, PS vice-president of general council of the north.