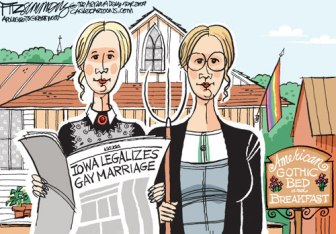 Today in Des Moines, Iowa, 62 jerks and 37 really fantastic humans gathered in a room to vote on House Joint Resolution 6, the amendment which seeks to repeal the state’s “marriage equality law” and prohibit same-sex marriage, civil unions and domestic partnerships. The Resolution passed, 62-37.

“I want to stab them in the livers,” said Rachel Kincaid, Senior Editor at Autostraddle.com.

The bill will move on to the Iowa Senate, where Senate Majority Leader Mike Gronstal – who is apparently on our side – will fight attempts to pass this amendment which seeks to legalize bigotry and discrimination, causing a pernicious trickle-down effect which eventually makes lots of gay people hate themselves. Both houses of the Iowa legislature have to approve the measure in order for it to be put up for referendum. If that happens, it might be on the ballot in 2013, but “if Gronstal is successful in blocking a Senate vote this year, the earliest it would go before voters would be 2014.”

A KCCI-TV poll in June 2010 found 53% of Iowans favored same-sex marriage rights and 41% apparently had nothing better to do with their brains than to make their gay friends and neighbors miserable.

An earlier poll from the Des Moines Register found 62% of Iowans felt lawmakers had more important things to worry about than same-sex marriage. Apparently the economy and world hunger just wasn’t enough.

How could anyone see these testimonies and decide “I need to stop this from happening?” Is it us, or is it getting kinda inhumane in here?

At this point my attention has shifted from “What are the chances this will actually work? What is a referendum? Will it pass in the Senate do you think?” to “Why are so many people so mean and close-minded?” More to the point, why did a specific density of them have to be located in Iowa at this particular time? Iowa was one of our big victories of 2009, and reminded ourselves of again and again when we lost every single ballot measure concerning gay marriage. We know in a vague, technical sense how this happened – midterm elections, a general shift towards social conservatism in important political seats across America. But in a more abstract and more important way, in the part of us that knows we should be happy for other people when they have something that they want and that makes them feel good, we still don’t get it. Why Iowa? Why, Iowa?