2010 was a landmark year in terms of progress in gay issues: we had a record number of queers elected to office, and a number of states moved forward to make the right decision on gay marriage. Unfortunately, the lurch towards equality that characterizes America almost always means that progress like this is followed by a backlash. Basically, [some people think] you might want to brace yourself to hold onto those marriage rights. You may recall the huge number of seats in the House and Senate that were lost to Republicans in the 2010 midterm elections; you may recall that one of the reasons we wrung our hands over that was because it would give the GOP the legislative might to do exactly this. Here’s Gayapolis’s list of states in which marriage rights may be attacked this year:

+ In Wyoming, the GOP is trying again to ban gay marriage in the state’s constitution

+ In Pennsylvania, the state GOP is also readying an anti-gay marriage proposition

+ The GOP in the US House is certain to try to kill marriage equality in DC, tho this may be more difficult

+ In New York, the GOP takeover of the Senate has likely killed marriage equality efforts there for the next two years.

+ In Iowa, the GOP won the House, and is increasing pressure on the democratically controlled Senate to help repeal marriage equality there, while simultaneously pushing to impeach the four remaining justices of the Supreme Court who legalized it in the first place.

+ In Rhode Island, where we might actually get marriage equality this year, NOM has threatened to spend “whatever it takes” to derail the possibility 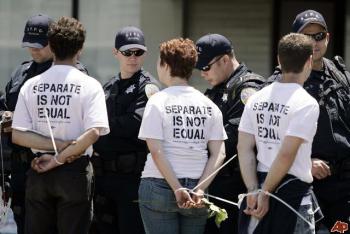 I don’t think anyone was actually sitting back and basking in any kind of glory, so I’m not going to tell you to stop. Instead, we need to keep working and keep pushing people to do what’s right even when they don’t want to or it makes them uncomfortable; we need to not give up even when we’re exhausted and disillusioned and nothing seems like it’s working. So that twelve months from now, we can be writing another set of year-end articles about how all of these initiatives failed, and how many happy gay families there are out there protected from bigotry and prejudice.