Do you remember Andrew Shirvell, the former Michigan assistant attorney general who made an anti-gay blog that targeted the openly gay former University of Michigan student body president, Chris Armstrong? Armstrong sued Shirvell in April 2011, “alleging Shirvell defamed him, invaded his privacy and stalked him,” according to the Detroit Free Press, and it all finally culminated in a trial that took place last week. The outcome? Armstrong won the case and Shirvell was ordered to pay $4.5 million.

According to the Huffington Post, this all could have been avoided if Shirvell had apologized. “Armstrong’s attorney, Deborah Gordon, had said she would drop the lawsuit if Shirvell apologized and retracted his comments … Gordon said the jury couldn’t make him apologize so money was the only answer.”

It’s an odd case ­— a former government official publicly bullying and defaming a college student. On his anti-gay blog, “Chris Armstrong Watch,” Shirvell posted photos of Armstrong’s face covered in a rainbow flag and swastika. Among other things, Shirvell called Armstrong a “racist elitist liar, ” and a “viciously militant homosexual activist,” and accused him of “liquor[ing]-up underage freshmen and promot[ing] homosexual activity in an effort to recruit them to the homosexual lifestyle.” 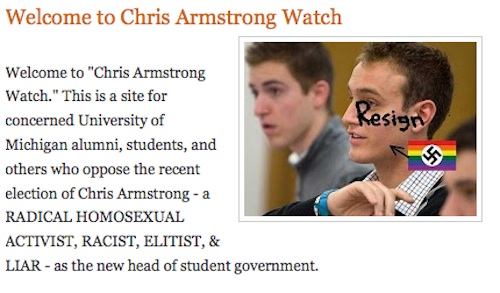 But why was Shirvell railing against this college student? The main policies Armstrong pushed for as president of the University’s student body were gender-neutral housing and gender-neutral bathrooms, policies that Shirvell thought were “too radical.” Shirvell alleges that his blog was “political speech” and protected under the first amendment — “I viewed my blog as a movement to get Mr. Armstrong to resign,” Shirvell said in court, according to the Free Press.

Shirvell, an ex-government official and fully grown man, displayed a bizarre fixation with Armstrong, who was then a 21-year-old college student. In an interview with Anderson Cooper on CNN in 2010, Shirvell kept insisting that the public defamation he was doing to Armstrong through his blog was “just another tactic” that happens in  “political campaigns.” Cooper responded quickly: “This is not some national figure. This is a guy who’s running a student council.” 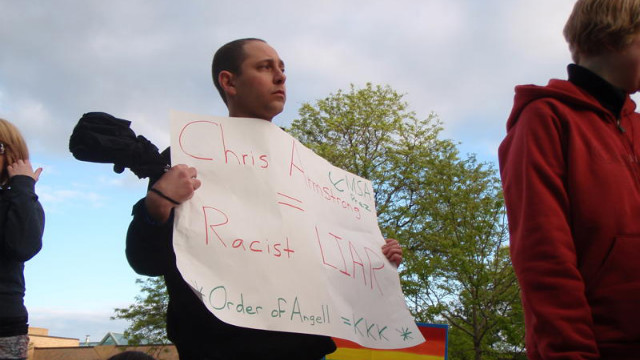 This is an extreme case of public bullying. While Shirvell maintains that all of the nasty things he wrote about Armstrong are protected under freedom of speech, the recent ruling says otherwise. The line between first amendment rights and hate speech can be a blurry one, but this case sets an encouraging precedent for what is tolerated in terms of the bullying of LGBT individuals.

“It’s not just a victory for me, but for so many others,” Armstrong said last week, according to the Detroit Free Press. “I think of all of the people who are bullied outside of a strong supportive environment like I had at [UMich]. I think it’s a strong statement about what will be tolerated.” 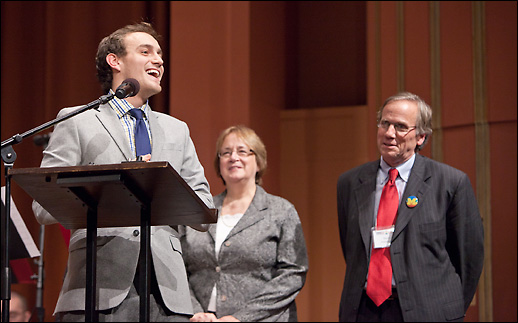 Former Michigan Student Assembly President Chris Armstrong (left) is joined by his mother, Cynthia, and father, Steve, at the 40th anniversary gala of the Spectrum Center to announce the creation of a scholarship fund that will help students who face bullying attend U-M. via http://www.ur.umich.edu/

In this case, the media and the court have taken Armstrong’s side, portraying him as vulnerable and in need of protection — an average kid who happens to be gay.  Even as Shirvell tries to present Armstrong as some kind of “privileged pervert” and “Satan’s representative,” according to his blog, the public and the media seem to understand that this case is an extreme version of the bullying against LGBT youth that has become a major public issue.

Deborah Gordon, Armstrong’s attorney replied: “Who is this radical homosexual lobby? Is it me? This man had to be held accountable. It was the wrong thing to do. He lives in a delusional world. There were some conservative Christians on the jury, and they spoke very forcefully about why they had to issue this judgment.”