FACT-CHECKING: Rob Tisiani, the “ultimate myth-buster and talking points author” is one of many people who noticed the ridiculous fact-f*cking and faulty math employed by anti-equality leaders in the Prop 8 Trial (and beyond). This includes our dear Willliam Tam who testified in a court of law that gays are 12 times more likely than straights to molest children. Tisiani rightly names this “the most vicious sort of lie told about the gay community.” So he made this video to “school anyone who actually thinks Perry defendant William Tam has even one foot in reality” and “arm people with the truth to combat this evil.”

“When our opponents demonize openly gay men and falsely shine the spotlight on us, they’re letting the real abusers hide in the darkness. and continue their abuse. They’re sacrificing children to their own homophobia.”

You can also read a transcript of the video here. 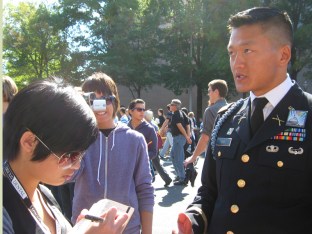 DON’T ASK DON’T TELL: A new year, another chance to repeal Don’t Ask Don’t Tell! Richard Socarides, who was Bill Clinton’s gay rights adviser from 1997-1999, takes Obama to task on his lack of movement on the issue in The Wall Street Journal.

Secretary of Defense Robert Gates and Chairman of the Joint Chiefs of Staff Admiral Michael Mullen are set to testify at a hearing of the Senate Arms Services Committee on the policy, which will be the first meeting of its kind since the law was enacted in 1993. New York Senator Kirsten Gillibrand, a Democrat, called for the legislation that would’ve placed a moratorium on gay  military discharges.

Most administration observers who follow this closely believe that the Pentagon has already signed off on supporting an end to Don’t Ask, Don’t Tell once the White House decides the timing is right. But Messrs. Gates and Mullen have yet to say so publicly.

Apparently the White House failed to repeal the law last year — when democrats still held the house majority and most Americans favored a repeal — because they feared a backlash akin to what Bill Clinton experienced in 1993 with a series of anti-gay fear campaigns.

Sidenote; 1993 was pretty rockin’ (aside from Brandon Lee dying during the making of The Crow and my parents getting divorced) and the mass media of the time was surprisingly progressive: Schindler’s List, Philadelphia, Angels in America, Beavis and Butthead, The Real World... so maybe people had nothing better to do but freak out about the army.

+
Okay, back on topic about DADT. THIS:

What is especially troubling, however, is Mr. Obama’s oversensitivity to a dwindling minority of bigots on this issue. Hundreds of military careers have been destroyed on his watch for no valid reason. The country has been deprived of the talents of these service members and has wasted millions of dollars on their training.

Many wonder when their president will show the same kind of concern for the constitutional rights of gay American service members as he has for enemy combatants held at Guantanamo Bay. Many wonder what the administration’s willingness to treat gay Americans as second-class citizens says to Uganda and other countries that are considering laws that would subject gays to imprisonment and even death.

Gay Americans have been among the president’s most ardent supporters. Their enthusiasm, and that of their families and friends, could be crucial in this year’s elections. The president’s action — or inaction — on Don’t Ask Don’t Tell will be noticed.

OBAMA: This whole deal sort of falls in line with the general criticism of Obama — this week’s Newsweek cover story (written by someone who’s apparently working on a biography of George H.W. Bush and is a lifetime Republican, so take it with a grain of salt), “Obama is accused of being too radical, but he’s been governing from the middle for a year. So why all the anger? Because he’s leading with his head, not his heart.”

We basically think that because Obama is playing the middle and the right wing still thinks that he’s going to kill their grandparents and that Sarah Palin & Glenn Beck are our most promising hopes for “saving” “America,” he might as well just go radical nowm yeah? I mean clearly you can’t please those asshats anyhow. So.

OLBERMAN: If you missed it last week, Jon Stewart called out Keith Olberman for going a wee bit overboard on Scott Brown. Olberman apparently conceded and said maybe he did get a bit wacky. It’s good though — we need to keep ourselves in check so as to not give the other side any ammunition against us.