Aside from the $10 bottles of water, 100-degree middle-of-the-desert heat and the worst ‘bathrooms’ on the planet; music festivals are hands-down amazing. You can catch all your favorite artists in the same place, hang out on blankets with old friends, make new friends, and drink a lot!

There are approximately thirty music festivals that will be showcasing music’s best and brightest talent around the USA this year. Leveraging my extensive experience as a music festival attendee, I’ve put together a survival guide to this year’s biggest: SXSW, Bonnaroo, Coachella, Lilith Fair, Lollapalooza, and Michigan Womyn’s Music Festival.

Whether you’re a first timer who’s popping your festival cherry or a festival crusader, this guide will help you navigate the music fest’s muddy waters and tip you off to some of the artists that we think you should really check out this year.

I’ve been attending SxSW since 2004. It’s one of the largest music festivals in the world and follows a Film and Interactive Festival. Fun fact: Twitter was invented for SXSW indie hipsters to keep in touch with each other during the festival! Neat huh?

Literally thousands of bands descend on Austin each year to showcase. For musicians, it’s the holy grail of festivals, the place where new artists are scouted out and signed up to record labels. Austin’s famous 6th Street closes down to accommodate the unimaginable number of fans and music industry folks rushing from venue to venue ’til 4am. The weather is temperate and the venues are all small so you really get up close with bands you wouldn’t be able to in other places. This festival is for the fans.

Next weekend our SxSW warrior Stef will be start bringing us daily reports from the festival. To get a taste, check out her highly entertaining SxSW Captain’s Log from last year.

Also check out Uh Huh… Her?, the winning film from the 2008 Uh Huh Her SXSW Video Contest which just so happens to feature Autostraddle’s Riese and Crystal.

Plan, plan plan: timetables are time consuming and also a little nerdy, but for SXSW a schedule is a must. There is so much happening at the one time and so if you’re across it, you’re going to miss your favorite acts.

Location: THE place to stay in Austin is along South Congress [SOCO]. I recommend Hotel San Jose, which has a great location and reasonable rates, and is comfortably alluring without being pretentious. 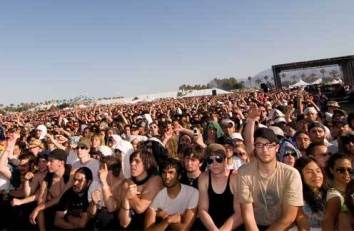 Coachella is best known for three things: the music, the mud and the unbearable heat of the So Cal desert. Portopoddies and endless pools of mud are endured by thousands who want to catch the latest hype acts all in the same weekend. Coachella isn’t so much a festival as it is a music experience, a mini-Woodstock, three full days of camping the desert, laying under the stars with your closest friends and the world’s best musicians. It’s best enjoyed with a big group of people, mostly so you can set up an tent city.

Sunscreen: the first time I went, I forgot sunscreen. That’s a huge mistake when you’re about to spend three days in the middle of the desert.
Water: before you leave for Coachella, stock up your car with as much water as possible. Hydration is key, and your own bottles will save you from paying $10 a pop at the festival.
Excess Baggage: carrying a bag is a pain, however while at Coachella it’s crucial to keep essential items like bottles of water, cash and the emergency TP roll with you at ALL times.
Porto-what: the portable outhouses are quite literally full of s*&% by the end of the first day. To avoid horrible lines and even more horrible smells, visit first thing in the morning. Always carry TP in your bag, sometimes your only option is an impromptu squat. 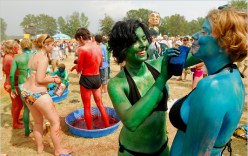 Camping and themed tents play a big part. When I went last year, a mural wall was a popular theme — festivalgoers wrote on a large piece of paper that’d be used as a stage backdrop on the last day. Music aside, Bonnaroo serves up some great art work from contemporary artists and screenings of the latest independent films. Our Tech Editor Taylor loves it and will hopefully be there this year.

Rain Rain Go Away: rain during festivals is not uncommon. Check out suggestions for wet weather festival battle gear in Style Editor Becky’s Festival Style Guide.
Take earplugs: when you’ve watched super loud bands all day, at night-time silence is golden. Protect your ears from the hundreds of drunk festival goers you’ll have to fall to sleep beside. 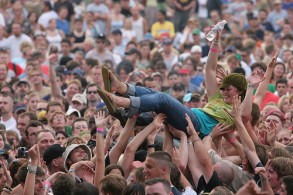 Since its inception in 1991 as a sort of new Woodstock for the grunge-rock generation, Lollapalooza has been a great music festival featuring alternative rock, hip-hop and punk rock bands as well as dance and comedy performance, craft booths and non-profit/political activism. Past bands featured have included Jane’s Addiction, Nine Inch Nails, Red Hot Chili Peppers and Green Day. I first heard Smashing Pumpkins when I attended the festival in 1996.

Lollapalooza has been a great music festival for discovering new and exciting bands and artists, from rock to rap, who fall just outside of the mainstream. The first time I attended Lollapalooza was in 1996, and it was there that I discovered a little rock band called The Smashing Pumpkins.

Lollapalooza used to tour the country, but now it’s taken up a permanent annual residency in Chicago’s Grant Park. There’s no camping here. There’s a lot of nice hotels nearby, many located within  a five-minute walk to Grant Park. The festival lineup will be announced in late April!

Definitely Will Be there: The Strokes

Hotel On The Fringe: good accommodation sells out fast, so make sure you reserve your hotel at the same time you buy your festival tickets. We even recommend doing reserving before.
Bring A Blanket: chairs are prohibited from the festival. 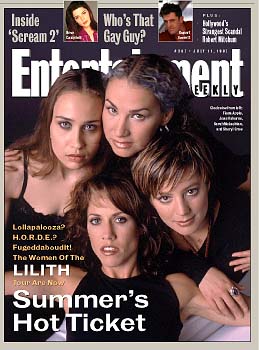 With multiple stages featuring female musicians or female-fronted groups, you can’t throw a stone at Lilith Fair without hitting a lesbian, or at least a girl who has a strong appreciation for other girls. From ’97 to ’99, Lilith was The Festival for women to attend and it introduced this young lesbian to Ani DiFranco and Melissa Ferrick, among others. When I heard the festival was returning this summer after a decade-long hiatus, I shrieked with excitement. I think you did too.

This isn’t an overnight event, just an all-day concert.

Some cities have been confirmed, however the dates and lineup are still tightly under wraps. There are a few hints to be found on musicians’ myspace pages.

MUST-SEE BANDS (Varies In Each City)

Study the Lineup: the headlining acts aside, the Lilith artist line up will vary from city to city. Don’t assume your favorite artists will be performing in your city – you may need to travel or just whine about how tegan & sara aren’t coming to your city.
Attire Matters: If you’re a girl who likes girls who probs like Tegan & Sara, Lilith Fair is where you’re going to meet them. Read our What Should I Wear To A Music Festival? Style Guide for some recommendations for cute attire.

As the title implies, it’s all about womyn and you have to be one, or identify as one, to get through the gates. For six days in August, MichFest’s makeshift town is run by womyn — they set up tents, manage the camp, and work as stagehands and entertainers. It features great female musicians as well as comedians and theatre groups.

This festival means more to me than most. It’s fascinating to exist in a world of only womyn. MichFest even changes the name of “Portopotties” to “Portojanes” in line with its elimination of words catering to a male-oriented world.

Sleeping Beauty: Bring a padded sleeping bag or air mattress, the grounds at MitchFest can get very rocky.
Arrival: Get in early on the first day so you can set up your tent before it gets dark.
It’s An Experience: Be prepared to have your eyes opened and your horizons broadened!

Where are you going, where have you been?