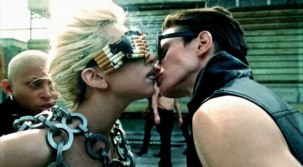 Lady Gaga’s music video “Telephone” has set the Internet on fire and subjected 15 million people to the pleasure of girl-on-girl action. Lady Gaga’s clearly not the first lady to love another lady in a music video — music videos LOVE gratuitous lesbian makeouts! Well, for the last 15-20 years.

You know what’s interesting/predictable? Despite the ubiquity of the lesbian makeout trope in music videos, rarely is the maker-outer the actual musician or a band member [even in queer-lady videos, of which, let’s be honest here lesbians-who-are-about-to-yell-at-me, there are not many good queer-lady videos] [The Eth, Indigo Girls, Tracy Chapman, kd lang, & 4 Non Blondes make their most well-played music videos totally sans lesbian content]. In fact, it’s usually male musical artists who feature “lesbian” themes in their videos. Notable girl-on-girl videos have come from Blink 182, Queens of the Stone Age, Aerosmith, 50 Cent, Rolling Stone, Nelly, Metallica, and Lords of Acid. AMONG OTHERS.

So, aside from Lady Gaga’s dyketastic Thursday sexplosion on “Telephone,” what other ladies have gone for the makeout?

Here’s just a few on the tip of our tongues:

Erotica (1992) — Remember when Madonna was still edgy? Let us refresh your memory:

Madonna pretty much paved the sexual way for female musical artists, and she also made out with Amanda Cazalet in Justify my Love (1990). “Justify my Love” is so ’90s, and again we have her making out with a lady for the benefit of a dude, but there’s a part where she actually has sex on camera, which is one of a few reasons why this video was banned on most outlets… even from allegedly progressive MTV. Oh, ’90s Madonna, you endlessly beautifully raunchy world-changing creature.

Let’s not forget when Pink decided to make out with a girl, she made out with um, herself!

3. Dragonette — I Get Around

Embedding unfortunately disabled by request, but in this video THE ACTUAL WOMAN FROM DRAGONETTE sings about how she likes to get around with lots of people, which includes lesbians and dudes. Audiostraddle recently caught Dragonette in concert, at an intimate lesbian club where Martina Sorbara was rocking an alternative lifestyle haircut.
+

Oh t.a.T.u, what else can we say about you that dear Stef hasn’t said already. Best/worst fake lesbians of all time.

+
5. Other lady-bands with girl-on-girl videos include The Sounds’ Tony the Beat…

6. Shiny Toy Guns’ Le Disko. I wish Shiny Toy Guns really did play live concerts in clubs where cute lesbians make out with each other:

And a few of the dude bands with girl-on-girl scenes:

Minus.Plus. — Love Song: I don’t really know what the context of this video is or what kind of story they are trying to tell or why they picked a lesbian couple to be the cute couple making out and walking on the beach for this video, but they sure are cute!

+
Blink 182 — I Miss You: Blink 182 is wearing nice suits, and they miss you because you were always so full of life, jk why are all the girls in this video dead and/or catatonic? Oh! Except for the two ladies who are making out/fucking up each other’s lipstick. In the second half of the video, most of the girls wake up and stalk around ghostily in bad makeup.

She Wants Revenge — Written in Blood: What we have here is a straight male fantasy of a woman’s boyfriend picking a girl for her, and then her and that girl getting it on while he watches.

Tosca — Honey: Basically what happens here is someone from Germany is going to have to explain this 2002 German music video to me. Watch!

+
Simian Mobile Disco — Hustler: I think we’ve all happened upon this video simply because of the awesomely intensifying girl-on-girl sexy that takes place. And if you haven’t seen it yet, you’re in for a treat:

+
In conclusion, more girls should make out with girls on camera.