Greenblatt ran Showtime during The L Word‘s hay-day and is the same man who encouraged supporting gay and lesbian characters in Nurse Jackie and United States of Tara. The same man who greenlit The Real L Word.

He left Showtime rather abruptly last year and landed at NBC as the “Entertainment chairman” – and guess what he did as his first order of business: he ordered a lesbian romantic comedy TV pilot titled I Hate That I Love You!

Here’s the pitch: “A straight couple introduces two of its lesbian friends to one another and what results is both instant attraction and a pregnancy.”

Now, just because NBC ordered a pilot doesn’t necessarily mean the show will get picked up and even air – we’ll probs have to wait until the summer find out the show’s fate. 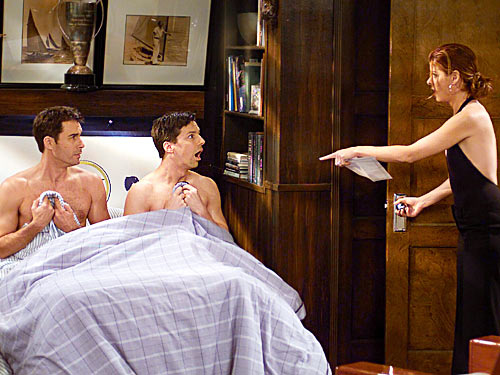 Ironically, our very own Liz Feldman had written a different lesbian-pregnancy themed show titled A Lot Like Us for NBC, so unfortunately (for our girl Liz) it looks like they went with the Marchinko show instead. In case you’re curious, here’s the pitch for Liz’s show: “a sitcom about an alternative LA family, centering around an expectant lesbian couple and their donor who lives with them.”

I really want to rant on here about every piece of mainstream lesbian entertainment centering around pregnancy/sperm donors/kids but I’ll leave that to you in the comments. I know you feel me.

Either way, this is a huge deal and can potentially be the first time a major network will lead with lesbian characters since Ellen’s second sitcom, The Ellen Show in 2001 (her first show was picked up in her pre-gay TV days).