This week on Pretty Little Liars, I wondered Jesus Christo how do these girls get anything done? I’m surprised Hannah even had time to shower this week (let alone with company), albeit with her clothes on.

Sometimes Pretty Little Liars seems like an amazing Saturday Night Live skit* where everyone is just trying to have a good time/put on a theatrical production/swim/pretend-to-be-blind and those girls are constantly whispering and looking at everyone with crazy eyes. Can’t these ladies order a cheeseburger without eyeballing a murder suspect?

I mean you just CANNOT speak to these girls. Here look — HEY LADIES what are you having for lunch? 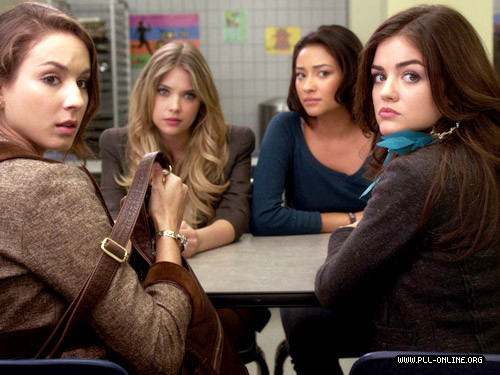 Are you all studying for an exam? Need help? I’ve noticed you’re constantly whispering in class and that can’t be good for your information retention skills. (Except you Spencer, four for you Spencer.) 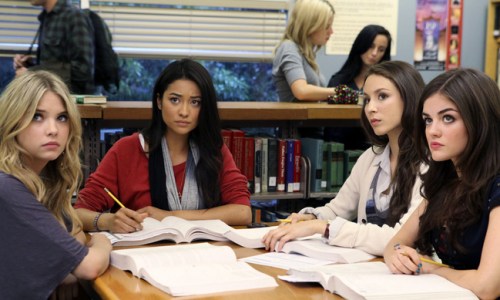 Wasn’t it weird the way that Hanna just got hit by a car? A little too Thunder Mountain Railroad, if you ask me. Are you girls feeling okay? 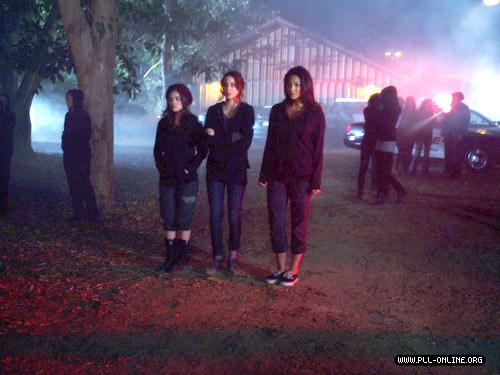 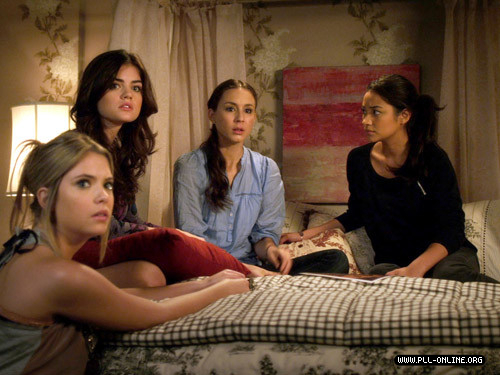 Hey would y’all be able to just stand perfectly still for me and give me your best The-Camera-Doesn’t-Love-You vacant stare that’d make Janice Dickerson shoot jumping beans at your eyeballs while screaming about inventing the word “Supermodel”? 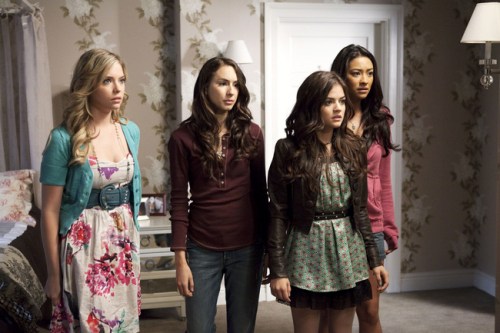 This week on Pretty Little Liars, Ian reveals that Allison was not a psycho-bitch but actually a psycho-stalker-bitch and the rest of the girls, hair shimmering in the sunshine as usual, are peripherally and/or intimately involved in a school production of The Bad Seed because Ezra only involves himself with literary works easily parlayed into a metaphor for the girls’ feelings, Spencer teaches Hanna about reading between the lines because just like Jordan Catalano (Hanna’s boyfriend’s host body) Hanna cannot read because who has time, what with all the bathing in milk or whatever it is to get her skin to look that good. Also, Aria hops around in a Carmen Sandiego hat, flipping out that Ezra doesn’t want to meet her friends or talk about the future, Spencer is suspicious of everything except Toby who she kisses (I think) because they are both Danger Strangers, the girls ask Caleb to break into Jenna’s braille phone but don’t ask him to trace the texts they’ve been getting from this total bitch who’s just all butthurt about not winning an AfterEllen Visibility Award, Hanna kisses Caleb and clearly sees his penis in the shower, and once again all the ladies remain pretty, little, and lying.

Here, see for yourself:

Onto the lesbian, who was not making out with Brittany or Santana this week. Or anyone.

Our first Emily-inclusive scene takes place at play auditions for “The Bad Seed,” where all the maidens have forgone their Frye Boots for fuzzy socks because the only difference between a 17-year-old and the 8-year-old they’re auditioning to play is height. 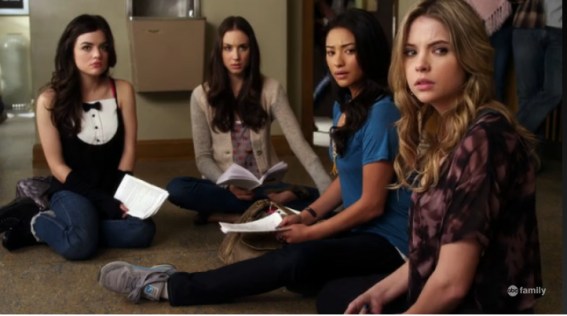 This is that 8-year-old girl, for your reference: 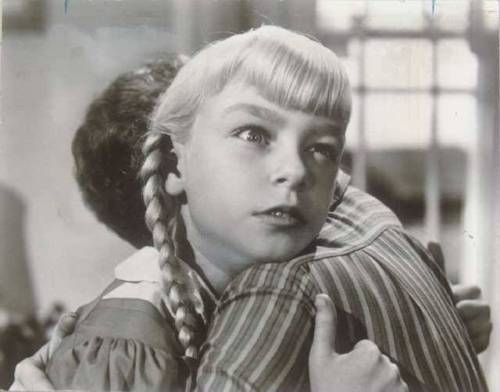 And while we’re referencing things and Jenna said it was her favorite play because she is “fascinated by the nature of evil” (the horse is dead, bleeding and has cholera at this point rally), here’s a little bit more about The Bad Seed:

Aria had to rush over from Sex and the City‘s Big Gay Wedding wearing the SJP-sported mini-tuxedo bib with Brittany S. Pierce arm-warmers but now she is HERE HERE to help Hana look shorter and Emily is there, it’d seem, because Shay Mitchell is nice to look at and nobody expects anything beyond exposition to come out of her lovely mouth. Besides Maya/Paige/Spencer’s down-there hair, but I digress.

Emily says “it’s not like we can go on a double-date or anything,” but she’s not talking about how nobody can hit up Breadsticks with Emily’s Boot Camped Minor-League-Stoner Buddy or the Closeted-Possibly-Insane-Bang-Bangs-McBangerson-Swim-Musketeer-Kissing-Bandit because this conversation’s topic is not the beauty of woman/woman love but the borderline-illegal topic of child/teacher love. Suddenly everyone wants to hang out with Ez and tag his photos on their facebook. Kids these days. Don’t know the law.

Spencer got a 2-fer with Rachel Berry this weekend on PJs at Target and although the crying baby Spencer hears in her paranoid ghostwriter pericranium is mildly compelling, I’m far more interested in if those pajamas are full-body with footies or not. 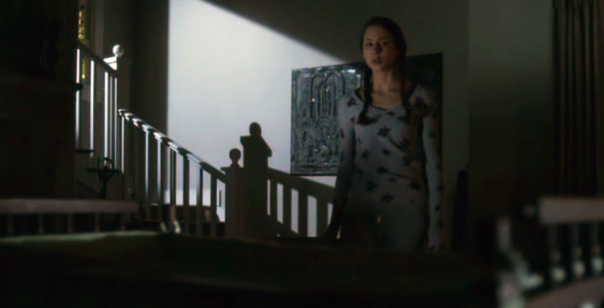 Emily’s next appearance is at a sort of swank roadside cafe in Mexico City, where Spencer has just returned from harvesting Sanka in the cool afternoon with the Man of La Mancha. Actually I’m divided about if this poncho = ethnic-exploitation chic OR lame mismatched hippie bullshit gowncape OR you know, “fun with afghans!” (dressing on a budget is important during a recession). 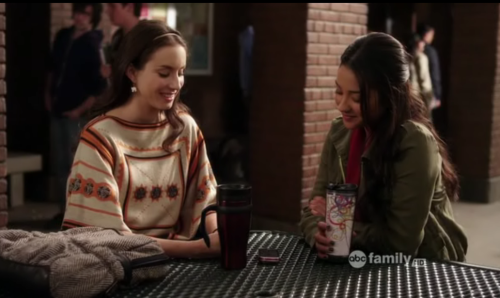 Wait, NM, they’re just at one of many ambiguous coffee/lunch/cupcake spots in the greater Rosewood metro area, sharing some one-on-one time. Or maybe it’s the cafeteria, and they’re having coffee and Trident for lunch.

Whatever, here’s the point — while Spencer’s chatting about snagging the role of the woman who spanks the Bad Seed (come ON you know Spencer has a dirty side, maybe it’ll come out during Bacchanalia at Sarah Lawrence) Paige calls: 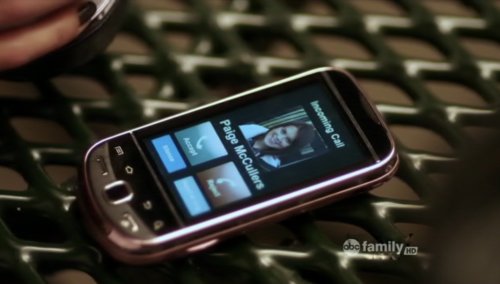 Spencer: Is she still torturing you?
Emily: No, we’re cool now.
Spencer: Really? What brought you closer, her trying to drown you?
Emily: She’s got a cousin in the military and is kinda anxious about it.

This is confusing because is Emily lying to Spencer? Or is she lying to everyone? Or has she been talking to Paige, but not about the military but rather about being HOMO?

They could’ve solved this mystery just by having a SUPER QUICK scene between Paige and Emily in this repulsively heterosexual immoral fabric-of-society-rupturing show.  It’s not really fair as we’re already stressed about the Avon Barksdale case and that whole “A.” thing.

Then! Emily and Spencer spot Jenna talking to Ian and Ian hands her a package. It’s probably a dead baby.

“What is that?” asks Spencer. “What did he just give her?” asks Emily. Two birds of a feather.

Anyhow, Emily begs Spencer to hand over the excuse to visit Toby (French book) so she can convince him that she is by far the nicest person in Rosewood, and also the most forgiving. She doesn’t hold attempted murder against you even, nothing like that.

Onto play practice. Does Emily have a part? Shouldn’t she be swimming? Well I’m glad she’s here because the girls have JUST NOW REMEMBERED the SKETCHIEST THING OF ALL TIME HAPPENING TO THEM EVER! 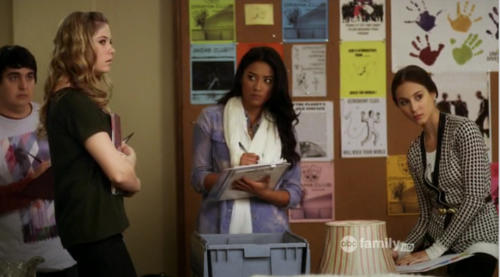 Once upon a time, Allison got the girls into a frat party in probably the nicest fraternity house of all time, I don’t even see holes in the wall, let alone pizza on he floor and beer pouring out of the television. 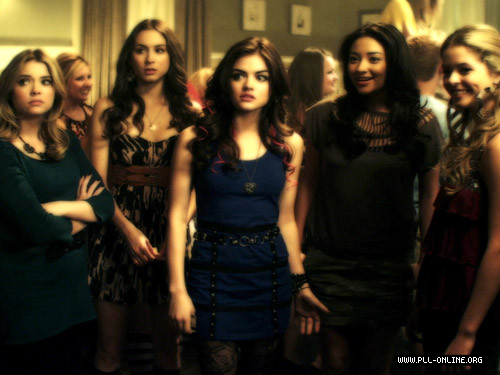 Meanwhile at the pool table, Hanna tries to get Emily to go talk to a boy who is “drooling in his beer cup” over Emily and Hanna says Emily should go talk to her and Emily’s like “erm no thanks I’m looking for the LUGS.” But then someone dies so Emily is saved. 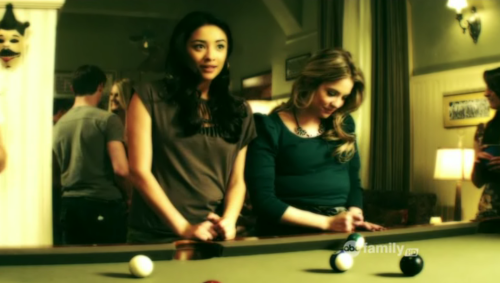 Right so then some girl falls from the top of the stairwell and dies and probably Allison killed her. 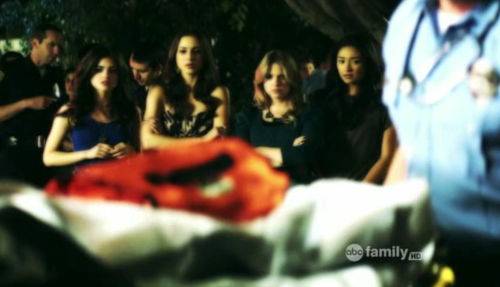 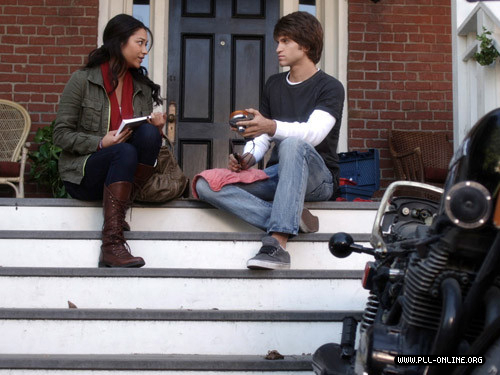 Toby and Emily are having a nice little chat about how Emily is perfect and it was Jenna that turned Toby in, not Emily.

Emily: Maybe we could go out some time and celebrate, now that this is over?
Toby: What happened to Maya?
Emily: I meant, celebrate as friends.

Look at that — didn’t waver. LESBIAN FOR REAL.

But on Saturday when Emily shows up for her breakfast date with Toby, she’s greeted not by Toby but by the Grim Reaper. Emily inquires as to Toby’s whereabouts and Jenna says he’s out with Spencer. She seems to expect Emily to feel as rejected by this as she does, but HELLO Emily is GAY and that’s one of many differences between homosexuals and Fans-of-Incest so Emily’s not like wounded in the heart/vadge, just confused in her little head. 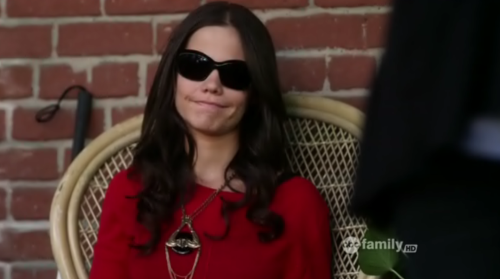 Also Jenna put away your knitting needles, we both know you have NOTHING to knit and you’re just doing it to look extra creepy and potentially homicidal.

As Emily walks away, wondering if it’d be weird to go to Bob Evans alone, Jenna pulls out her magic EVIL flute and begins playing some kind of death march for the unborn incest-baby fetus she has wrapped in a hand-knitted oven mitt under her bed in case Toby ever tries to escape her watchful eyes again. 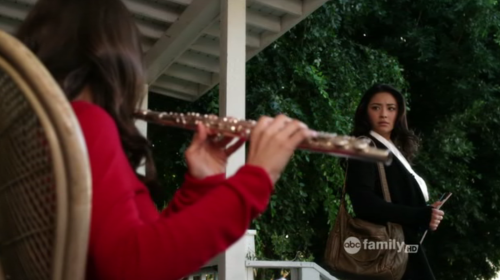 Emily looks at Jenna like “grrrrrrrrl just when I thought you couldn’t get any fucking weirder you whip out your little tin shofar of hate.”

Later on they find a trophy which they think is the murder weapon but is probably a plant and Emily/Spencer get super bossy/sexy and demand they go to the police with the evidence and so they do. 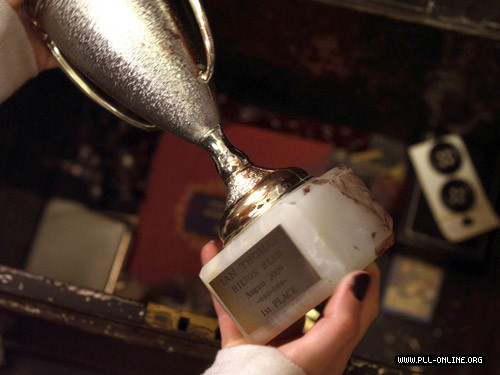 Emily: “I can’t believe we have it, the weapon, in our hands,” says Emily. “After all this time–it’s like —”
Spencer: “It’s like Ali can finally rest in peace.”
Emily: “Like we all can.”

Is anyone still concerned about Allison resting in peace? I thought we established that everybody hated her. Anyhow clearly that’s not the murder weapon, have these girls learned nothing? The police discover this and then the next day they show up at school to bring all the girls down tot he station and it’s not for jelly and ice cream.

Next week, there will be more screentime for the lezzers because it appears these girls just got home from Truck Stop [SPOILER ALERT]: 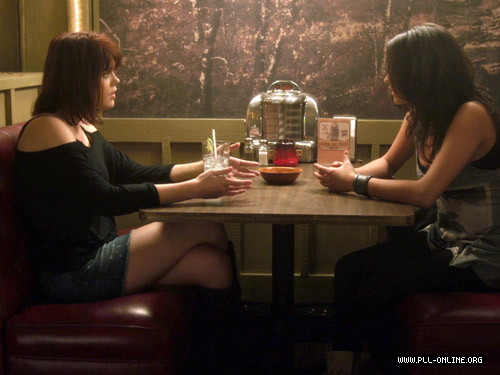