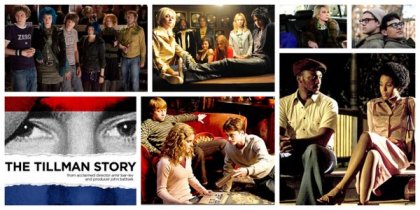 As we exist only within the most radical fringes of independent, bohemian, post-capitalist society, we frequently find ourselves unable to have any feelings about The Oscars. Because it costs three gabillion dollars to make a movie these days, cinemas tend to specialize in movies that three gatrillion people will want to see. As aforementioned, we are radical lezzy commies and have no appreciation for such mainstream things. We would rather just watch the Julie & Brandy In Your Box Office version.

So! We have re-vamped the Oscars to best suit our purposes and provided our own nominations here for our own Awsker office pool. These selections were selected by a complicated formula that included asking everyone at Autostraddle which movies they liked this year (it turns out everyone DID see The King’s Speech, who knew) (Also, apparently Riese was the only one unable to enjoy/sit through Inception because every 30 seconds she had to yell about how this or that two minutes/30 seconds of unnecessary special effects spectacle could’ve fed the entire continent of Africa and brought arts education back into our nation’s underperforming schools), remembering people talking about movies last year, looking at the actual Oscar nominations, and glancing at RottonTomatoes.com.

You can vote in the comments, and whichever movie wins will have the pleasure of winning.

You are also welcome to say things like “HOW COULD YOU LEAVE OUT NANNY MCPHEE RETURNS???!!!!!” with as much punctuation as possible.

So we present the 82nd Annual Awsker Awards:

Exit Through the Gift Shop
The Tillman Story (site)
Waiting for Superman (site)
Inside Job
Joan Rivers: A Piece of Work (site)
8: The Mormon Proposition
Waste Land (site)
Casino Jack and the United States of Money
Marwencol (site)
Soundtrack for a Revolution (site)

The Kids Are All Right
The Runaways
Howl
The Social Network
Inception
The Town
Scott Pilgrim vs. The World
Black Swan
Another Movie

NEXT: Supporters, directors, writers, female-friendliness, Julie & Brandy, and the worst movie of the year.