For the first time maybe ever, there is a mainstream (ish) movie in theaters about something I care about: HOWL. I cannot yet see HOWL, despite wanting to desperately, because every theater in my city is too busy showing Resident Evil Afterlife: 3D.

+
So because I love poetry / Allen Ginsberg / Howl, etc., in lieu of watching the actual film I’m going to try to explain why this movie / poem / moment is so important to me. Have a seat.

Allen Ginsberg grew up in Paterson, New Jersey, and went to San Francisco in 1954 to write poetry. I, Rachel, was born in Worcester, Massachusetts and when I was seventeen I went to San Francisco to read poetry. Or maybe I went because I’d already read poetry. Maybe I went because I needed to be somewhere else, and that was why I’d started reading poetry in the first place. I don’t really know. Poetry is everywhere and anywhere; t 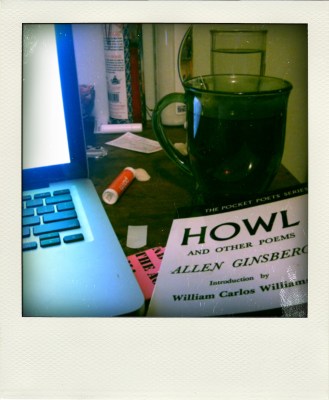 here’s no need to get on a plane to find it, so why did I?

We’d been assigned Kerouac‘s On the Road, and it was very special. Like most seventeen-year-olds, I liked the idea of traveling aimlessly and then writing a literary bombshell while on enough benzedrine to kill a horse. Everyone loves that line:

“The only people for me are the mad ones, the ones who are mad to live, mad to talk, mad to be saved, desirous of everything at the same time, the ones who never yawn or say a commonplace thing, but burn, burn, burn, like fabulous yellow roman candles exploding like spiders across the stars…”

Though I understand why it resonated with so many people, I was never one of them. I think it just struck me as a little much to declare that the only people for you are the ones who “never say a commonplace thing.” The lines that resonated with me, that sounded like they were written about me and the people I loved, were from Howl:

“…who wandered around and around at midnight in the railroad yard wondering where to go, and went, leaving no broken hearts…

…who chained themselves to subways for the endless ride from Battery to holy Bronx on benzedrine until the noise of wheels and children brought them down shuddering mouth-wracked and battered bleak of brain all drained of brilliance in the drear light of Zoo, who sank all night in submarine light of Bickford’s, floated out and sat through the stale beer afternoon in desolate Fugazzi’s, listening to the crack of doom on the hydrogen jukebox…”

I liked Kerouac and Ginsberg because they were about fucking shit up and doing things because it felt good — which felt very important to me at the time — but I liked Ginsberg more because I felt instinctively that he belonged to my people. Kerouac was an artist, but he was the football quarterback of artists; he was good-looking and funny and everyone loved him. He slept with boys sometimes, but it seemed at worst accidental and at best magnanimous, like he couldn’t bear to deny anyone the experience of being with him. Ginsberg, on the other hand, was a balding bisexual Communist Jew, and he was not cool. 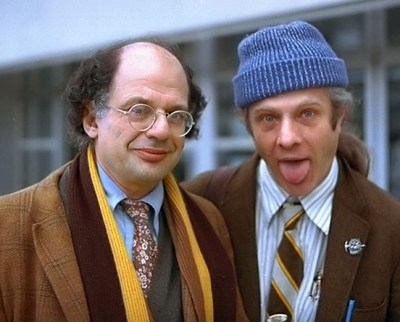 While Kerouac mostly wrote about doing things – drugs, women, women on drugs – Ginsberg wrote about writing. He wrote about words, about “yacketayakking screaming vomiting whispering facts and memories and anecdotes and eyeball kicks and shocks of hospitals and jails and wars, whole intellects disgorged for seven days and nights…” Ginsberg was a queer loser, like me, and America felt very important – very true to the political moment.

In the foreword to Howl, William Carlos Williams writes of Ginsberg, “He was always on the point of ‘going away’ where it didn’t seem to matter…. his ability to survive, travel, and go on writing astonishes me.” Travel seemed important to me, too; going away to other places seemed important. Also, I was seventeen and I felt like I was crazy, so my best friend and I bought plane tickets to San Francisco for ten days under the frail pretext of a school project on Beat poets. I left behind my family, my soft-focus incubator of a small town, and the girl who would sometimes call me, high, at four in the morning, to tell me I was beautiful. I brought with me the collected letters of Allen Ginsberg and Neal Cassady, and in the airport I fell asleep in my friend’s lap.

I don’t think I read any poetry the whole time I was there. I don’t remember any poetry. I remember sleeping in, both of us dozing in the same big bed even though the we’d been reminded, several times, that there was an empty bed in the guest room and one of us was welcome to stay in it because wasn’t it a little crowded in there with both of us?

It wasn’t crowded. Not even when she took non-drowsy allergy medication too close to bedtime and kept us both awake all night with restless arms and body.

Instead of poetry, I read these love letters, and was more engrossed in them than I was in the city around me. I was obsessed with them because they weren’t poetry. And because even though they were beautiful, they sounded like me; they sounded like the people I loved. Ginsberg was a little verbose and a little needy; Cassady smoked too much and both of them lived in their own heads, in each others’ heads, in these letters that did not exist in a time or a space but just on paper. I liked that – that felt real to me.

Partially under the pretext of our “school project” but also for real, we went to the City Lights bookstore, which first published Howl in 1956 and ignited a court trial about what was “obscenity” and what was “art” and what those two things might have to do with one another. This was where I bought my copy of Howl; it felt appropriate. As I was leafing through it in the upstairs poetry room at the store, a twentysomething with a blond ponytail and goatee approached behind me.

“Is this the first time you’ve read that?” He whispered like we were in a church.

“Then is this the thousandth time you’ve read it?” He wanted to talk about poetry; I told him I liked Rilke, and he said he’d never heard of him. My friend and I left. She held my hand when we crossed the street.

BY KATE BEATON, COURTESY OF HARKAVAGRANT.COM

There isn’t any more to that story. Once I read a poem and got on a plane. Later, I came back. In his lifetime, Allen Ginsberg moved from Paterson, New Jersey to California, to Denver, to New York, to Houston, to Rockland a thousand times, to Morrocco, to Paris, to India.

This poem is the only common thread, and then again it isn’t, and that’s the whole point.

Maybe you’ve noticed, but there are a lot of comings and goings around here lately; there’s a lot of talk of San Francisco. There are more than a few of us who are about to “[barrel] down the highways of the past journeying to each other’s hotrod-Golgotha jail-solitude watch or Birmingham jazz incarnation.” Lately it feels like everyone is “[driving] cross-country seventy-two hours to find out if I had a vision or you had a vision or he had a vision to find out Eternity.” Do you know what I mean? This is what poetry is for. And since this movie is apparently “. . . devoted to the recitation, comprehension, and appreciation of a single poem,” we are basically frothing at the mouth trying to get up in there.

…to recreate the syntax and measure of poor human
prose and stand before you speechless and intelligent
and shaking with shame, rejected yet
confessing out the soul to conform to the rhythm of thought in his naked and endless head,

the madman bum and angel beat in Time, unknown,
yet putting down here what might be left to say in time come after death,
and rose reincarnate in the ghostly clothes of jazz in the goldhorn shadow of the band
and blew the suffering of America’s naked mind for love into an eli eli lamma lamma sabacthani
saxophone cry that shivered the cities down to the last radio

with the absolute heart of the poem of life butchered
out of their own bodies good to eat a thousand
years.