Here are some especially love-worthy comments:

Bitch Society Award to Vikki on Lily’s College Lesbianage #4: “People often think I’m a bitch. I only know this because once, through some miracle, I ended up living with a woman who told me, ‘You know… I always thought you were a bitch but it turns out you’re really nice and funny.’ I think there are a lot of us out there like this. We should have club. Wait – I think we do… it’s called The Internet.”

Lesbian Innovation Award to JB in Tennessee on 10 Best and 10 Worst Gay Happenings of 2009: “I want to be suddenly be intelligent with both math and science, create the world’s first time machine, travel back to when and where season 6 of the L Word was being written, and burn those scripts. Somehow I think it would still be awesomely bad though.” 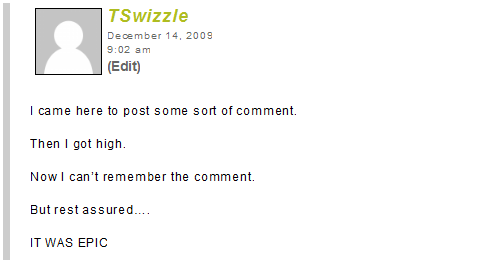 Trademark Infringement Award to Carmen on Houston Largest City to Elect Openly Gay Mayor, Don’t Mess With Texas Srsly: “The gay science article would have been so much better without the non-point of the whiteness of bones. That’s a dealbreaker™!”

Sass > Class Award to Lexi on Houston Largest City to Elect Openly Gay Mayor, Don’t Mess With Texas Srsly: “I expected you guys to make a ‘Houston, we have a problem’ joke, like ‘Houston, we have a lesbian’. Once again Autostraddle proves to be a million times classier than me.”

The bcw Award to bcw on 10 Best and 10 Worst Gay Happenings of 2009: “Autostraddle is totally my Person of the Year. Like, Autostraddle is really nice and looks pretty all the time, and passes fun notes and things. And when she gets a wonky font-job we just politely stay quiet and compliment her footer and winning personality. And then she tells us about her favourite books and movies and music and tv and things, and we think wow Autostraddle, you’re like the nicest, coolest friend ever. You’ve had a great year, Autostraddle. Here’s looking at you. Because you are a screen.”

Damn the Man Award to DemiArianna on I Got 99 Lesbian Lovers and “The Topper” Ain’t One: NSFW Sunday: “So much for NSFW. I’m definitely in the office riiightt nowwwww. TAKE THAT corporate America. Now where the hell is my chinese food?”

Acid Trip Award to Alice on Spike’s 2009 Video Game Awards Features Hot Games, Hot/Random Celebs: “Elves are awesome. I once had a dream where Idina Menzel saved someone from being beaten up and then she turned into a high elf from World of Warcraft. It was odd. Overshare. She was dressed as a ninja.”

Well-Earned Wages Award to wasteunit on Guilty Pleasures & Personal Geek Evolution: Nerd Nostalgia Open Thread!: “I’m a park ranger, and my last name is Green. GREEN RANGER FTW! If I had a nickle for the number of drunks that realized this while I was in the middle of yelling at them, I’d have at least $12.”

I Can Haz Hopes & Dreams? Award to andie on Daily Fix: “I’ve been waiting for the hoverboards since I can remember. Thank you for breaking my heart Autostraddle.”

60% of the Time, It Works Every Time Award to Jamie on Lesbian Teacher Sex Romp Scandal Result of Punk Rock, FACEBOOK: “omg I can totally identify someone’s sexual orientation in the blink of an eye… except maybe all the super straight girls I occasionally fall in love with.”

Code Limitations Award to southpaw on Anyone But Me Season Two Premiere Party New York City: “Y’all photobombed straight off the internet and deep into our hearts. Now if only there were a </notcreepy> html tag for this comment…”