[all images and photos on this post (except the last one of Lily) are via Achtung Baby!,
the blog of our friend John Moon.]

Hello Autostraddlers…it’s been a while!

I’ve spent the last couple of weeks trying to figure out just how much is appropriate for me to share on the interwebs. Should I use this as a diary of sorts—one where I display my often Sylvia Plath/Elizabeth Wurtzel-like thoughts? Should I be discussing relationships? Should I be emotional? Or should I be interviewing fellow gay students? Reporting on gay news from a variety of college campuses? Separating my personal life from what I am writing about that month?

Ideally I should be able to find a balance, to give the readers what they want while not divulging too much of myself and most importantly to do my job in a consistent and orderly fashion. But ideally I would be able to get through the day without immobilizing anxiety and random spurts of unstoppable tears. I’d be able to be a better and more reliable intern during this Autostraddle revolution (we ARE taking over the world, if you haven’t noticed) while also being able to keep up with my relatively simple academic schedule. But then life gets in the way.

I waited two months to introduce to Lesbianage the fact that I had met someone. Two months seemed safe. Things appeared to be going well. And then they weren’t. All of the sudden my relationship existed on the internet but did not exist in real life. This could explain our never-ending love for the internet.

I’m not a huge fan of talking about my own romantic relationships, save for angry post-break up ranting to anyone who is willing to listen. So to describe the state of mind that my relatively recent loss put me in for about a week and a half…well let’s just say I listened to a lot of Leonard Cohen and angry women who probably played Lilith-Fair circa 1997. Not because I felt like I would never be in a relationship again but because I lost the comfort of always having someone to count on, to be there when I needed to talk, or when I just needed someone to have lunch with. I’m back to square one. I have to attempt to actively make friends again and it’s incredibly scary. Gays in the Woods!

The weekend before my happened-way-too-fast relationship ended just as quickly as it began, I spent two nights away from Manhattan with a bunch of gays in a cabin. I am not making that up! I didn’t think I’d be so into the touchy-feely emotional Oprah-like feel of the event (even though I knew for sure that I wanted to go—that I HAD to go) but by the end of the first day I felt surrounded by so much love that I knew I never wanted to leave.

It is nearly impossible to put into words what a weekend like that felt like. No man-made system of language can do justice to what I got out of that experience. So I urge all of you college students—bring up the idea of an LGBTQ retreat to your gay groups on campus and if your school already offers a retreat or an event with a similar idea—go to it. It is 100% worth it and will be one of the best experiences of your life.

So That’s How You Make Friends…

After nearly four months in college I am finally figuring out how to make friends. The process is strangely simple. Apparently you get someone’s number, then you text them and ask them to get coffee with you, and then magically you sort of have a friend! Who knew? The only time I remember ever actively making a friend was in first grade when a new girl entered our class and I went up to her during reading time and said “Hi, I’m Lily. We should be best friends”. (Side note #1: I was reading the autobiography of the figure skater Tara Lipinski at the time. The book mainly included lots of pictures of half naked female figure skaters. It starts young…)

But ever since I achieved that one brave social moment at the age of five I have been unable to figure out how to recreate that friend making moment. I began to count on other people and their ability to see me as a cool person who was worth trying to make their friend. Recently, when on the phone with my mother, she warned me of the consequences that this friendship making habit produces. She has struggled with a similar problem in her life—she assumed people would simply flock to her and therefore would not have to put any effort into the friendship making process. The issue is that both my mother and I look like bitches and our social anxiety is often confused with coldness or the idea that we think we are better than everyone else. Of course it is the opposite that is true.  So the next time you run into me or my mother, know that we are not being cold…we are just really scared of you! The issue of friends and family brings me to my next point: Thanksgiving. Does anyone actually like Thanksgiving? I know I don’t. My family is very small and spread out and because my immediate family lives in South Florida this often means that Thanksgiving is spent only with people who are well over eighty years old.  This makes dinner conversation difficult because frankly it ends up being the same conversation every five minutes (remind me to never get old). Luckily the older generation does not find my attending a Woman’s College as anything weird but rather as something old-fashioned and respectable. So no talk of boys (because they know I am not going to school with them) yet no assumption of my “alternative lifestyle” because every smart girl went to prestigious women’s colleges back in the day.

“Despite my comfort in being out at school and my ability to talk about gay issues freely with anyone I met there, at home felt anxious about my sexuality in a way I haven’t felt since I came out to my mom last year.”

It is the younger family members, or rather friends who are so close that they are practically family, that I have to explain why I would ever choose to attend an all girl school. And then, if they know I’m gay, I have to explain why my sexuality is actually not the reason I go to a woman’s college in the first place. It is so frustrating!

This prompted another difficulty that I found during my time at home. I unfortunately realized that despite my comfort in being out at school and my ability to talk about gay issues freely with anyone I met there, at home felt anxious about my sexuality in a way I haven’t felt since I came out to my mom last year. (Sidenote #2: The term “coming out” freaks me out and I hate using it. I wasn’t hiding anywhere! I did not emerge from under a rock! Let’s think of something else to say people!)

Pretty much everyone at home knows. My high school, my parents, their friends, my brother, his friends…but it is not something we talk about. It is not something I feel comfortable talking about with my family or our family friends. But it is also not an issue. Everyone is super liberal and super open minded. So why does it still make me so uncomfortable?

That is a question I may have to grapple with for the rest of my life or at least until sexuality becomes a non-issue. 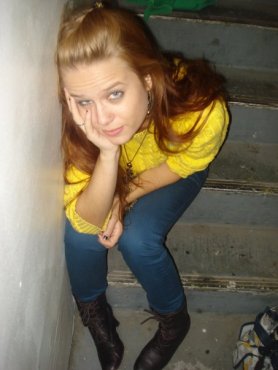 It’s Almost Winter Break, Guys! It’s that time where finals are nearing and the prospect of home is so close I can almost feel the fear of my plane ride coming into fruition. (Sidenote # 3: Planes weigh a lot. How the hell am I supposed to believe that they can be suspended in the air for hours at a time without crashing? Yeah Mary Poppins can fly, but that’s because Julie Andrews is god. I don’t care that there is some sort of science behind the plane thing, I just refuse to believe it)

I will be basking in the Florida sun for a month over break and couldn’t be more excited. New York is nice but maybe, just maybe, home will be able to put me back together into a functional (well, relatively functional) human being. Wishful thinking? We’ll see.