UGANDA: Anti-gay bigots plunge Africa into a new era of hate crimes. Bullies of a feather band together, and it’s not just Uganda anymore. Nigeria has a similar bill waiting to reach its statute books and already allows the death penalty for homosexuality in northern states, as does Sudan. Burundi joined 37 other African nations this year in criminalizing gay sex. Egypt & Mali are also pursuing similar goals and using morality laws against same-sex couples.

And in Uganda, David Bahati has put that bill on the table, and although Ethics Minister James Nsaba Buturo said that the death penalty & life imprisonment stuff was kicked to the curb, that stuff is defo still on the bill.

DON’T WORRY, POTUS HAS STEPPED IN WITH A GIGANTIC IMPORTANT STATEMENT: “The president strongly opposes efforts, such as the draft law pending in Uganda, that would criminalize homosexuality and move against the tide of history.”

Here’s what’s on the bill:

The Ugandan bill extends existing laws to make it illegal to promote homosexuality by talking or writing about it, and forcing people to tell the authorities about anyone they know who is gay. The bill, said Bahati, 35, an MP from the ruling party, aims to “protect the cherished culture of the people of Uganda against the attempts of sexual rights activists seeking to impose their values of sex promiscuity on the people of Uganda.”

Those nasty sexual rights activists with their agenda of freedom and happiness! Luckily, the United Nation is playing hardball on this one.

How about us who detest [homosexuality]; don’t we also have a right?

We believe that Allah created us to multiply and worship him. How will a gay do that? Muslims are aware that homosexuality is a sin and I am sure that the churches also teach that this vice is a sin and unacceptable in any society.

Homosexuality is akin to sodomy and you know what that means. There are grave consequences like HIV/Aids, psychological torture and others.

We want to be left on our own to decide the way we do things; nobody should interfere with the decisions we make. This is a matter (homosexuality ) that we oppose entirely. 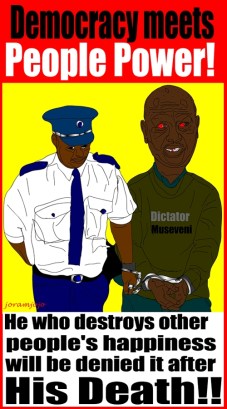 According to The Guardian, “Many suspect that it was outsiders who inspired this bill in the first place. In March, Bahati [person who presented bill] met several prominent anti-gay US Christian activists who attended a conference in Uganda where they pledged to “wipe out” homosexuality. The conference featured Scott Lively, president of California’s anti-gay Abiding Truth Ministries and co-author of The Pink Swastika, a book claiming that leading Nazis were gay. Also there was Don Schmierer, on the board of Exodus International, which promotes the “ex-gay” movement, believing people can change their sexuality and be redeemed. The third extremist evangelical to attend was Caleb Lee Brundidge, who is linked to Richard Cohen who believes that psychotherapy can “cure” homosexuality. Remember Richard Cohen? He was the guy who got schooled by Rachel Maddow.

Also check out this story from the Daily Monitor of a lesbian couple in Uganda fearing for the future under the anti-gay bill.

GLSEN is counting mentions of “fag,” “dyke,” and “so gay” on twitter to prove a point. Here’s the thing: we use dyke all the time. I mean, it’s not a bad word anymore. Queerty has a few more points, like that GLSEN is aimed at protecting schoolkids, but adults use twitter, and that “all uses of ‘fag’ are not terrible.” I can’t believe GLSEN is so out of touch that they don’t realize Dyke isn’t just sometimes “not terrible,” but an intrinsic element of lesbian history, which they should probs educate themselves on! Dykes on Bikes, the Dyke March, Dykes to Watch Out For, c’mon!

PROTEST: A group of protesters stood outside NY State Senator Carl Kruger’s front yard on Sunday protesting his decision to vote against marriage equality earlier this month. Kruger, a Democrat, was one of 38 senators—and eight Democrats—who voted against extending marriage rights to gay people in the state. (@advocate)

HOT FOR THE OTHER TEACHER: It amazes me how these right-wing asshat columnists jump in just when a story is about to finally cycle out of the news-cycle with their lovely opinion. Oh, freedom of speech, Andrea Payser of The New York Post TAKE IT AWAY –

MALE PROSTITUTES YAY: Men may now join the ranks of Nevada’s brothel prostitutes, after a unanimous decision today that added language to health codes so male sex workers could be tested for infectious diseases. (@lasvegassun)

HOUSTON, WE HAVE A PROBLEM: Houston’s newly elected gay mayor breaks a barrier, but to little fanfare. Ms. Parker’s victory owed more to a series of small, gritty factors — from low turnout to the absence of a Republican contender — rather than to a huge groundswell of support for gay rights, political strategists here said. (@nytimes)