Good afternoon people of all 2389790 genders! Today you all get a comment award. Or a lot of you do anyway.

Have you joined our book club yet? You probs should, it’s going to be fun.

On a more serious note, an anonymous guest wrote a brilliant post about her struggle with drug addiction and how we should leave Lilo alone. Crystal helped you come out at work, and Rachel made you want to see Howl rightnowomfg. Last but not least, we have another addition of get baked with Autostraddle: this time with dips. 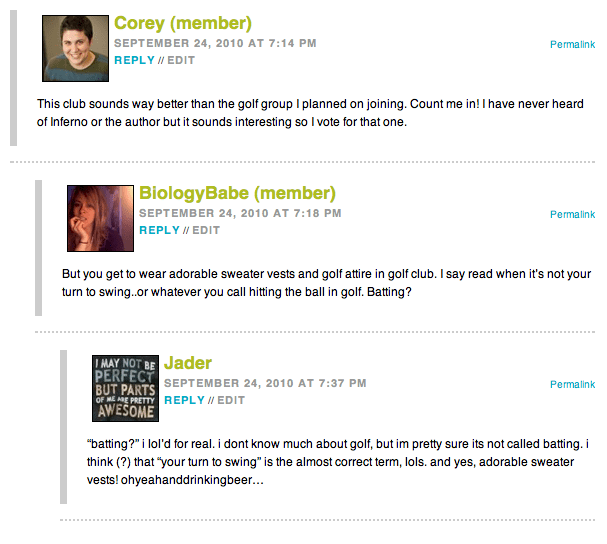 The This Actually Happened Award to wasteunit:
I am so excited for thissss! I think mainly gay gay gay gay gay but mixing it up a little every now and then would be friggin’ sweet.
Also, can we play Monopoly anyway? I can never get anyone to play with me. I have a secret. You can’t tell anyone, you guys. Okay, so when I was like 14 I was babysitting my neighbor’s kids. One girl was 7-ish and the other girl was potty training. The older girl and I were playing Monopoly when the younger one came over and peed all over the board. We kept playing.

On How Many People Are Gay? New UK Survey Says 1%. They’re TOTALLY Wrong.:

The Judy Blume Award to the people in the picture: 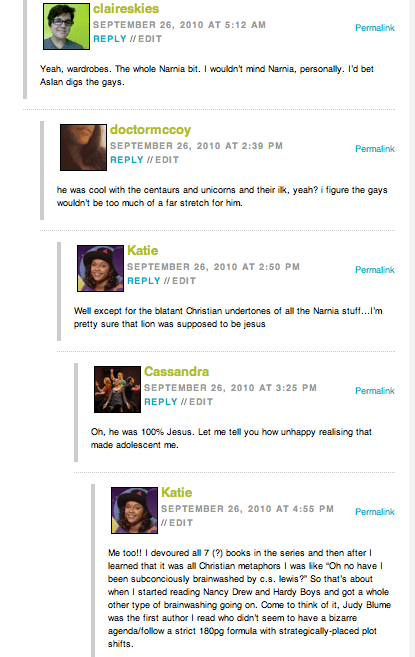 The Bringing Home The Turkey Award to Sherri:
There is inherent selection bias in a door-to-door study that should’ve been corrected with a better study design. Who answers the door during the day? Not me because I’m at effing work.

The We Got ‘Em This Time Award to Cassandra, wasteunit: 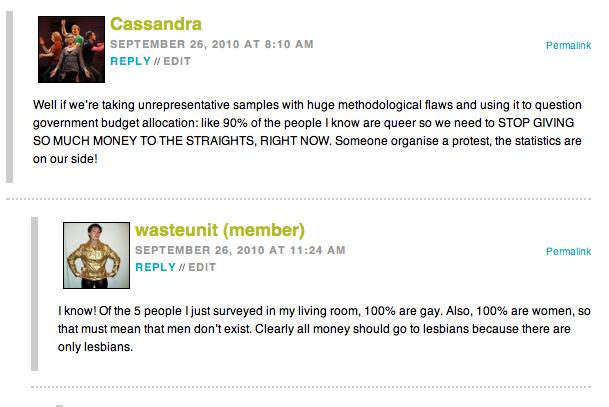 This Comment Is Fucking Awesome Award to Sasha Farce:
My new girlfriend is straight, still IDs as straight and will always ID as straight even after I have applied my patented brand of Sasha Farce Awesomeness to her ladybits.
One of the most awesome things so far is that there’s been no freakout, no late-night panics at OMG I DID A GIRL AND I LIKED IT, and I’m not convinced there will be either; I think this is part evolution of a greater acceptance of varying kinds of sexuality (which is progressing rather rapidly IMO) and partly because I am that damn good.

The No Shit Sherlock Award to melerwin:
So, wait, uhhhh – what was this article about? Oh, like, MORE straight chicks are into banging other chicks than there used to be? OOOooorrr is it about how more chicks, period, are into banging other chicks than there used to be?
There’s a common cliche involving the words “shit,” “Sherlock,” and “no,” but I should probably be nicer than that – and I hypothetically aimed the sentence I didn’t type at the original Guardian article by Wiseman, not our fine blogger female here.
Ok, this was an article written for a primarily hetero readership so I spare this gal Wiseman from the “NSS” commentary. I will say that after reading it myself, I can’t help but feel a little bit like it was a cross between a snippet of Nat Geo Explorer: Lesbians in the Wild, and some sort of Ladies’ Home Journal tidbit. “Hey ladies, if you’re feeling overworked, unloved, and underappreciate, well golly gosh gee, we’ve got just the solution for you!.”
Female homosex is portrayed as the latest greatest thing to pep up your step so you’re practically skipping between the goddamn stalls at the local farm market and weaving floor rugs out of old plastic grocery bags.
Maybe I’m just projecting there, though.

On Kurt’s Gleefully Gay Boyfriend Revealed, For Real This Time:

The Award For Mentioning Canada to Camille: omigod everything i love about the world is colliding, sndkgrepvfdblah! he’s cuter than a guinea pig, i wanna take him up to winnipeg (that’s in canada!)

On Ann Coulter As Headliner For Gay Homocon 2010: Well, That Happened:

On If Lindsay Lohan is “Pathetic”, Then So Am I: What It Feels Like for a Drug Addict:

The Truth Award to k:
i wish there was a way lindsay could read this. this was incredibly well written, poignant, and authentic. it is truly a shame that popular culture is so interested in seeing others fail and transposing false motives onto their actions for the sake of higher hits to their website, more magazine sales, or a simple vindictive nature. kudos to autostraddle for permitting a legitimate and heartfelt viewpoint to be heard–one which ought to receive much greater attention.

The Sarcasm Award to Cassandra, e: 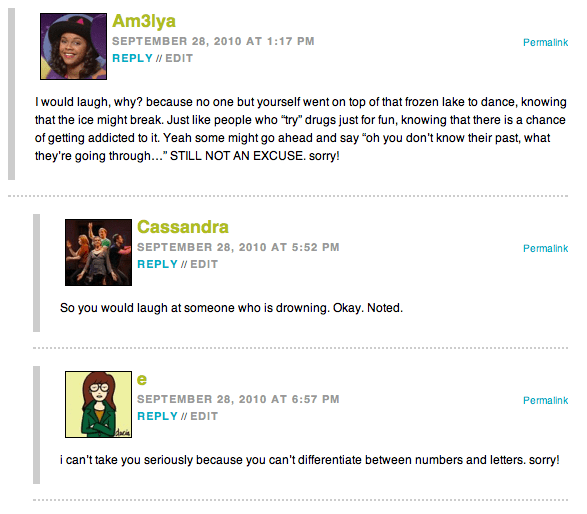 The bcw Award for bcw to bcw:
i’m glad you wrote about this because it keeps my band name, Shiloh Panic, relevant and topical.

On The Perks of Being A College-Bound Gay (Kinda Sorta Maybe):

The Award for Mentioning Harry Potter to doctormccoy:
it can be pretty much anything, really. we’ve got things like a common application, which lets you use one standard app and send it to multiple colleges- that’ll let you write on practically any topic you want. other than that, colleges will ask you to write about personal memories, an issue that you have feelings about, why you want to attend that particular college, so on and so forth. the better your essay is & the more it stands out, the greater your chances of getting in.
i completely envy you for not having to write one- you’re definitely not missing out! the entire process slowly sucks your soul, if colleges were dementors and we were all just little wizards & witches trying to make it through our final year at hogwarts. we’re not, sadly, else i’d be chugging butterbeer until graduation.

On Coming Out At Work: What a Way To Make a Living:

The Gay Award for Mentioning Unicorns to Bec:
I can really relate to being the boring gay at work. I am out at work and a grand total of no one was surprised or really even interested. Which is fine with me. Granted, I’m a scientist and in my experience, scientists are incapable of showing interest in or discussing anything that is not science related. I could be a purple unicorn and they would still just want to know if I was done with the PCR machine.

The Award For Coming Out In Style/Getting Fired to TSwizzle:
My co-worker had a bitchin’ house party the first month I was there, and she was all “Hey could you grab me another redbull from the fridge?” And I was all “Only if you make out with me”. Then we got jiggy, smoked a bunch of crack with her boyfriend and both got fired the next week for failing a drug test.
I regret nothing.

The Winner of the Lesbian Erotica 2010 Award to Sally:
Yes! I would totally read it!
Except less romance and more ass-kicking pls.
Except scrap that, I would totally write it!
I stilled my body, only slightly breathless from the motions of the hyeong*.
When they told me what had happened to her, I could not fight my instincts, ignore my base urges to attack, to strike, to cut my way through to her no matter how much blood I had to swim through to get there. But I had resolved never again to use my power in anger, the price was always too high**.
I stared at my upturned palms, each one a palimpsest***. The marks of every chigi* struck, every limb snapped, every throat choked had been erased by caresses of my beloved. But now they had taken her, and my hands were wiped clean once more, ready to be inked with fresh violence.
* interchangeable and possibly gibberish italicised martial arts terminology ** reference to ominous back-story which will confusingly turn the whole story on its head in penultimate chapter *** incongruous pretentious word used by delusional author pretending they are writing more than trashy pulp
Anyone else want to join lesbian kung-fu trashy writing club?

On Get Baked With Autostraddle: Dip Edition:

The Dip Award to maria, Jader: 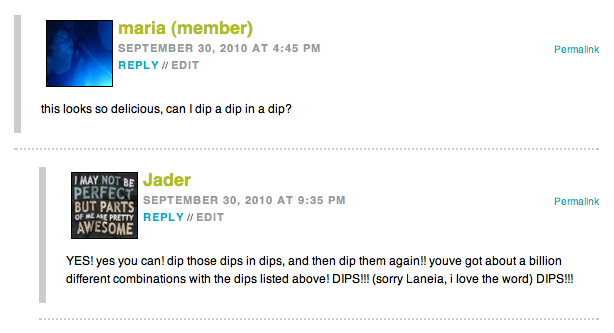 The Award for Advancing The Radical Homosexual Agenda to KZ, Lauren, Syd: 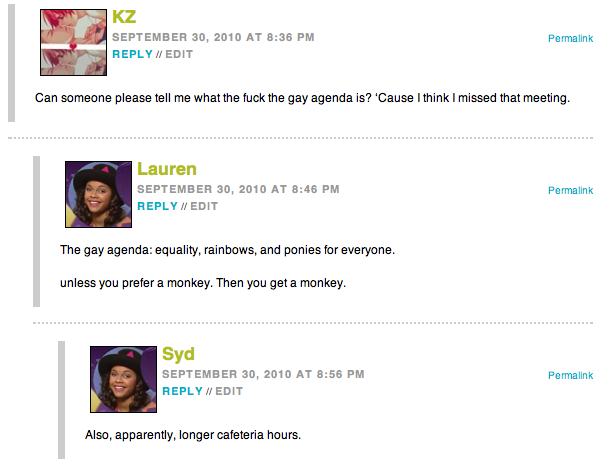