Over the summer the internets were abuzz with excitement when Chord Overstreet was cast as McKinley High’s new star quarterback and Glee club member.  Especially because news broke around the same time that Kurt would finally be getting a boyfriend – and how amazing for the new gay character to be a football star of all things? Well, that ain’t happening. Chris Colfer (Kurt) rationalizes:

So, while Chord Overstreet’s character was saddled with the burden of boring heterosexuality, Ryan Murphy cast the new role of Blaine who is 100% confirmed HOMO. Darren Everett Criss will be playing Blaine, a gay student from a rival school glee club and that face/hair combo is sure to launch a thousand fanfics. 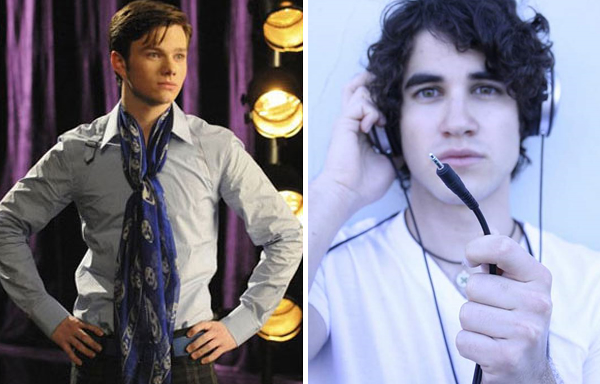 Speaking of fanfic, Darren is known to the internet as the star of A Very Potter Musical, a YouTube musical spoof of Harry Potter.

This still doesn’t explain why Jane Lynch was heavily hinting that Chord Overstreet would still be hooking up with Kurt in a recent interview. When asked about Kurt’s boyfriend she told E-Online:

They should probs bring in Brian Kinney too and we can watch it all play out together. Also, check out the video Criss submitted to Glee during the show’s open casting call this summer.

.
This officially makes Glee the gayest show on television (as if there were any doubt) with two gay characters, three out stars (Chris Colfer, Jane Lynch, new cast member Cheyenne Jackson) and one very gay creator.