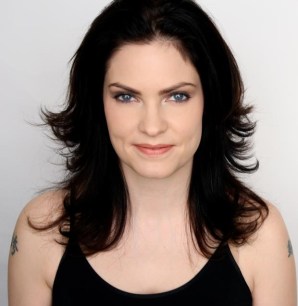 Back in the mid-2000s, there was a sole go-to web site for lesbian entertainment: Afterellen. AE peaked over the course of  2007 – 2009 as it unleashed a group of smart and creative LA-based writers, actresses and comedians upon it’s readers. The site’s flagship show, We’re Getting Nowhere, mostly consisted of Jill Bennett, Karman Kregloe and Dara Nai recapping, re-enacting and bashing lesbianish TV shows like The L Word, Top Model and South of Nowhere every week between 2007-2008. The show’s (and web site’s) break-out star was undeniably Jill Bennett, who landed the lead in And Then Came Lola largely due to her enormous online fanbase. In fact, when I met Riese back in March of 2009, the very first thing I asked her was, “Do you like We’re Getting Nowhere?” Her response: “I don’t have time for that shit.”

In the years that followed We’re Getting Nowhere, Jill went on to star in a cult web series (3 Way), create her own socio-politico vlog (The Violet Underground) and co-produce, direct and star in the web series turned feature film, We Have to Stop Now.

This weekend marks the premiere of her latest passion project, Second Shot, a sitcom she co-created alongside South of Nowhere & 3 Way co-executive producer Nancylee Myatt and marks her long-awaited reunion with her We’re Getting Nowhere cohort, Dara Nai (head writer).

In a nutshell, Second Shot casts Bennett as an ex-soccer star who  returns to her tiny Ohio hometown to run a gay bar, forcing her to work with its nutty staff, and face her first love – the girl who got away. Her co-stars include Maile Flanagan (3 Way), Amanda Christensen, Matthew Scott Montgomery, Minni Jo Mazzola and the hilarious Maia Madison (We Have to Stop Now, Hot in Cleveland).

Note: The show is streaming online this weekend only, April 6th + 7th, at secondshot.tv and on Facebook, until they find a distributor.

I chatted with longtime Auto-friend Jill Bennett about reuniting with Dara Nai, returning to Dinah Shore for this weekend’s premiere and her lessons learned over the past five years in the lesbian entertainment world.

What inspired the initial idea for Second Shot?

Nancylee Myatt, my co-creator, had always wanted to write a show that took place in a bar. We both felt that gay bars are still a very important and vital part of our community — especially for those living in small town or rural areas. It’s the only place to fit in for some people.

What has been the biggest challenge of juggling the responsibility of co-creating, producing and acting in the project?

Thankfully, during filming, I was really able to focus on being an actor — I had an amazing team around me that took care of the rest. Before and after filming though is the challenge — like many of the projects I’ve done before, the nature of the budget required all of us to work about five different positions.

How does it feel to reunite with Dara five years after “We’re Getting Nowhere“?

Absolutely amazing. I really missed her energy and our creative chemistry. She’s extremely talented, and we made her our head writer after she wrote Episode 2.

I do. We had so much fun during that time — and I feel like we were a part of launching something new into the LGBT media community. I’m very proud of that, and everything else is just water under the bridge. I’ve been lucky enough to continue to stay busy and creative and I’m happy for the opportunities it opened for me.

What is your emotional state returning to Dinah Shore for the first time in a few years for the premiere this weekend?

I actually wrote a whole blog post about it. It’s mixed given the recent changes in my life, but I’m definitely looking forward to it.

How did your experience as a producer and director on “We Have to Stop Now” inform your acting in this new project?

Sitting in the edit bay is the best teacher for an actor. You see every angle, every take and what works and doesn’t work in a close up. Acting for the camera is an extremely technical medium, and you’ll start to notice the nuances of a skilled camera actor. Meredith Baxter is a perfect example in Season 2 — I didn’t necessarily see it all in the room when we were acting with one another, but once I got into edit, I noticed all kinds of subtlety and detail in her performance.

What do you mean when you say “Second Shot” is not a web series?

By that we mean that we are a standard full length series — 22 minutes, as opposed to 3 to 7 minute episodes. There is a difference in the structure of a traditional length show, and we are calling ourselves an independent comedy to highlight that difference. Some people are turned off by the lack of production value or character development that is common in the web series world, and we wanted to make that distinction.

What are your hopes and dreams for the show? Picked up by a network?

It would be fantastic for someone, an entity with actual money, to pick us up so that we could produce more episodes. We are not opposed to self distribution, but our experience has taught us that it’s difficult to go beyond a few episodes or into multiple seasons with DIY. We shot three full episodes in five days of shooting… we can’t ask our team to do that again! So yes, Hulu, or a network online platform would be ideal, if only so that we can actually pay our cast and crew.

What has been your biggest lesson learned through your experiences in the lesbian entertainment business these past five years?

That you can’t listen to naysayers and no’s. I’ve been told by numerous people in numerous situations that something can’t be done or won’t work. Guess what? They were wrong. I did and I will keep doing.

What did you think of Jodie Foster’s speech at the Golden Globes?

I thought it was strange, interesting and sad all at the same time. I love her work, admire her choices in projects, but have always been a little frustrated with her silence on other issues. I understand the need for privacy (especially her, given Hinckley) but at some point, I felt like she was purposely hiding… I suppose it’s not fair to expect everyone to be as open as I am, but that’s how I feel.

Do you have a favorite or most memorable small town gay bar from all your travels around the world?

Travel has been my favorite part of the whole film festival experience, but Japan was definitely the most interesting, given the massive difference in culture.

When and where can we find more episodes?

We don’t know. We haven’t settled on a distribution model yet, that’s why we are only offering a sneak peek this coming weekend. We may come back as a DIY operation, but we are hoping for a larger platform in order to produce more episodes. So for now, the answer is: watch this weekend!

If you like it, tell your friends to watch. Like everything else online, we are counting on quick word of mouth to rack up some numbers this weekend to take to a network. We’d like to show that we can drum up the support of our core audience, in addition to drawing a wider mainstream crowd. While the show does take place in a gay bar, it’s a sitcom. Not a gay sitcom.

Stream “Second Shot” online  THIS WEEKEND ONLY! April 6th + 7th at secondshot.tv and on Facebook.