Tonight at the Golden Globe awards, Jodie Foster was presented with the Cecil B. DeMille lifetime achievement award. After Robert Downey Jr. and his thin line of facial hair rambled on about who knows what, Jodie popped in front of the crowd with the kind of energy that immediately makes everyone on Twitter accuse folks of being under the influence. And perhaps she was — the gay influence. Because after 47 years in the industry, she’s finally for realzies come out. Sure there’s been the mention of a partner in speeches here. The jumbled and confusing lust-driven defense of Kristen Stewart there. But nothing concrete.

After a long dramatic build-up, she did what everyone knew was coming. Troll the audience. “I’m…single,” she spit out with the same captivating energy she had from the moment she opened her mouth. Foster also thanked her ex-partner and co-parent, Cydney Bernard, as part of her own “modern family.” However after that she wowed America and brought the audience to tears with a plea for understanding.  She tried to communicate that no one can truly understand what it’s like to be under a microscope and in the spotlight from before you even know what the word lesbian means, and discussed coming out to her friends and family long ago. 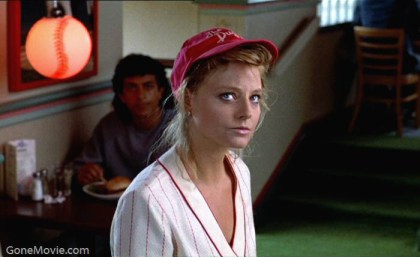 I can wear all the hats I want to now. Suck it.

Privacy is a thing of the past much like many of the sentiments that made her feel as if she needed to protect herself for so long. Yet many of them remain. So thank you Jodie. For telling us what we already knew. I think we (along with your mom) let out a collective sigh of relief and smiled knowing that one more person can breathe a little easier. It may be late, but it still matters. We can officially now state that one of the best actresses of our time is on our team (even if she might be retiring). Watch the speech now and important parts are transcribed below!

So while I’m here being all confessional, I guess I just have a sudden urge to say something that I’ve never been able to really air in public. So a declaration that I’m a little nervous about but maybe not quite as nervous as my publicist right now, huh Jennifer? But you know I’m just gonna put it out there, right? Loud and proud. So I’m gonna need your support on this. I am uh…single.

I already did my coming out about a thousand years ago. Back in the stone age in those very quaint days where a frazzled young girl would open up to trusted friends and family and co-workers and then gradually, proudly, to everyone who knew her. To everyone she actually met. But now apparently I’m told that every celebrity is expected to audit the details of their private life with a press conference, a fragrance and a primetime reality show.

If you had been a public figure from the time you were a toddler, if you’d had to fight for a life that felt real and honest and normal against all odds then maybe you too might value privacy above all else.

[On Cydney Bernard] There is no way I could ever stand here without acknowledging one of the deepest loves of my life: my heroic co-parent, my ex-partner in love but righteous soul sister in life.

Join A+!
Related:2013 Golden Globe Awardsjodie fosterThis Is A Coming Out Post