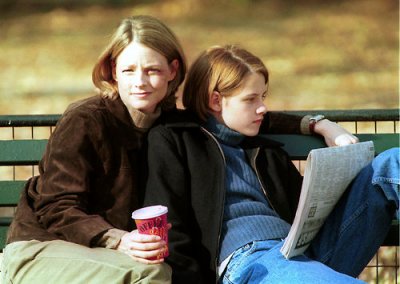 Today on The Daily Beast, Jodie Foster published an essay she wrote asking the media to lay off Kristen Stewart. It’s really lovely and compassionate and evocative in parts, and then in other parts it gets especially weird. The thesis of the essay is that Jodie Foster believes you should leave Kristen Stewart alone. As you may have heard on every website in the world except this one, Kristen cheated on her Vampire Boyfriend with the director of Snow White & The Huntsman and then publicly apologized, or something. We don’t think the specifics of that are any of our business, and apparently Jodie Foster agrees.

Foster begins the piece by drawing on her own experiences as a child actor, saying she wouldn’t have gone into the industry at all if she’d been subject to the scrutiny actors like Stewart are regularly subjected to. She then notes that she’s been able to keep her private life private by “inventing [her] own gothic survival tools” and “organizing [her] career choices to allow [herself] (and the ones [she] truly loves) maximum personal dignity.” She notes that celebrity culture today is cruel and merciless, offering little room for stars like Kristen to have feelings in privacy without the relentless snapping of cameras and invasive questions. This is relatively familiar territory.

Foster laments that the world would’ve suffered in her absence (“Sarah Tobias would never have danced before her rapists in The Accused. Clarice would never have shared the awful screaming of the lambs to Dr. Lecter”) and then goes on to discuss the vulnerability required to be a successful actor and her time working with Kristen Stewart on Panic Room. Page two of Foster’s essay opens with a description of an image of a “perfect moment” Foster has in her head involving an 8mm home movie made in the 70’s with a white-haired girl twirling in the surf, spinning and singing.

Which brings me to today’s Feelings Atrium, as jump-started this morning when this article sidetracked our editorial meeting. The point of the essay aside, writing on this topic at all seems like an interesting direction for Foster to take as a woman who has kept her sexual orientation a secret throughout her career, only briefly mentioning “my beautiful Cydney” (her then-girlfriend of 14 years) at an awards ceremony in 2007. Perhaps part of Jodie’s desire to keep her personal life private comes from being in the public eye from day one, from needing to keep some things close to avoid feeling so exposed.

What are your feelings?

Laneia: this article is insane i can’t believe she wrote it, edited it, reread it like a million times probably, and then published it

Laneia: like not even on her own blog, would i expect to see this

Riese: is she friends with somebody from the daily beast

Laneia: remember when rosie had her blog and she’d write about everyone and her feelings?

Riese: yes rosie’s blog was amazing
it was all in tiny little sentences

Laneia: i would expect this kind of thing from that kind of person
but jodie foster
who won’t even talk about her partner? is talking about kristen stewart?

Riese: yeah it could have been classier

Laneia: this is like when tom cruise jumped on the sofa and i could never watch top gun again

Riese: she probably sees herself in kristen

Laneia: yes i think she does too

Laneia: i feel so weird about jodie foster still

Laneia: is she high do you think?
b/c gawker is right, that one paragraph was insanely out of nowhere

Riese: i don’t know
she was my hero growing up
because she directed and starred in her own movies
and that’s what i wanted to do

Riese: do you think she’s protective of kristen stewart because she’s afraid that if she’s queer at all that she won’t ever feel comfortable coming out now
i mean, jodie foster of all people to advocate privacy
of her personal life
like is this just self-justification of never really coming out herself?
i mean i love jodie unconditionally, but

Riese: when she says like “i wouldn’t have survived in this climate” she’s not talking about young Jodie getting caught having an affair with a married director

Riese: she’s probably talking about being a lesbian and how that would’ve been terrible for people to know when she was younger

Laneia: “i couldn’t have had lesbian sex in college”

Riese: “it would’ve been on gawker”

Laneia: remember when romi was mad bc no one knew she was a celesbian. what if romi and jodie foster had to have a conversation.

Rachel: omg all i want to do now is watch a video of romi explaining to jodi foster what a celesbian is as if she does not know

Riese: i think kristen and malaika have checked out of this intellectual conversation

Laneia: we could make one of those cat videos

Kristen: the romi, the romi got me back