Hello squirrel friends! After a month-long sabbatical, I’m finally back! How exciting for you! And for me! But mostly for you! I’d like to thank the entire Autostraddle team and intern army for filling in and covering the Tuesday Televisionary marvelously in my absence. In fact, they did such a good job, I’m keeping them!

From now on, the Tuesday Televisionary will feature contributions from the whole gang, as well as the return of The Carlytron Television Awards! But first, some news.

The Television Critics Association summer 2009 press tour just ended, and there were tonnnnzzz of things that happened, far too many to talk about, so you can read a best/worst wrap-up here and see what Michael Ausiello at EW had to say about, well, everything!

Um, what else? True Blood got renewed for a third season, that’s really important because I finally got caught up on this show and it has totally blown my mind. You know what? Eff the news, we have so much to recap here! SO! MUCH! 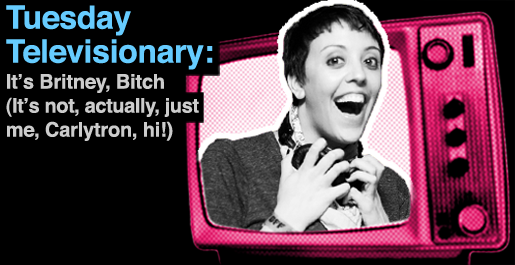 The Autostraddle TV Awards For the Week Ending August 9, 2009

Although I haven’t been an actual teen in over 9 years, I sat down tonight to watch the Teen Choice Awards hosted by those lovable curly-haired virgins, The Jonas Brothers. Back in the day we had teen actors and we had teen singers; now the lines are blurred and teen stars are brands, marketed in every way possible, through television, film, music, and acne prevention ads.

At most awards shows, the presenters give out some sort of statuette to mark their merits. It’s usually gold-ish and about a foot tall. At Teen Choice, since its inception, adult and child winners alike awkwardly accept life-size surf boards as a reward. Why a surf board, you ask? Probs because Teen Choice is a Los Angeles based show (LA being the land of sun and surf and the puppy mill of teen stardom). Crowd favorites tonight included The Jonas Brothers, Miley Cyrus/Hannah Montana, and the stars of that series I’ve never seen, Twilight.

In conclusion, I want all these kids to stop growing up so fast and spend a few more years running through the sprinklers in their backyards wearing capes and goggles, like myself and I would imagine Carlytron did until about age 16. [“Your assumption is correct.” – Carlytron] What I’m saying is, enjoy your youth and your giant surf boards while you can!

The Award For A Reality Show Awarding My Favorite Contestant With The Title: So You Think You Can Dance (Finale!)

You know, it’s so rare that this happens. For weeks now my favorite contestant on So You Think You Can Dance has been Jeanine. She’s so great, right? I totally love her. And once they eliminated Kupono, I knew that it had to be Jeanine. I mean, the other girls were all amazing, and Brandon and Ade. But not Evan. My mom liked Evan a lot. I didn’t really get it. Evan looks like Droopy, right? I don’t think he should’ve been in the final four, but this is about finding America’s favorite dancer, not America’s best dancer (blah blah blah) so whatever, I was just worried he’d win but he didn’t and I was really happy. The next season starts in a month instead of in a year so GET READY FOR MORE… very soon.

The Award For The Only Thing on TV Grosser Than True Blood This Week: Weeds (Episode 509: Suck n’ Spit)

I’m revoking Weeds‘ special award from now on. It’s good, but it’s not the most fabulous show in the land. Probably the most ridiculous, though. And somehow, I think this episode was grosser than this week’s True Blood, but more on that later. To be honest, I didn’t really love this episode. Andy and Nancy were playing house, and were like, suuuuper gross. I’m not even going to get into it (sidenote: I originally wrote “tit” not “it,” which I think is rather apt in this case). Shane got a … yeast infection and Celia started a pyramid scheme which led to this exchange:

The pink-clad girl who hit on Isabel last time: “I play softball.”
Carlytron & Celia: “Of course you do”

Speaking of lesbians, the You’re Pretty! lady is a dyke too! Obvs Showtime is trying to move up GLAAD’s Network Responsiblity Index and beat out HBO next year, which: good luck. Has Showtime even seen True Blood? Probs not. Anyway, Esteban proposes to Nancy (yet again) after a visit from Pilar and while they’re arguing outside, someone shoots at one/both/either/whatever of them and hits… wait for it… SHANE instead. In the shoulder, it seems, so he’s fine. BUT STILL. I don’t know why anything surprises me on this show anymore, to be honest.

I bet you thought this was going to be about Obsessed, didn’t you? Please. I’m so behind on that show that I’d need a bottle of Xanax to even attempt to get through it all in one sitting. No, this award is for Nurse Jackie. First of all, this is easily the strongest show on tv right now. I’m gonna go ahead and say that. Second, Jackie is making me insane! I find myself yelling at the tv while watching the show. Girl is unraveling, I can’t even deal.

Jackie does some shaaady things this week: rips a page out of Zoe’s journal that contained some incriminating Jackie quotes, snorts whatever pill in the hospital chapel, screams at Coop, tells O’Hara off (oh hell no!) and falsifies a patient’s donor card and time of death. Girl! Is you crazy? Also she’s now getting nosebleeds from all the snorting and like, duh Jackie. She also tells poor little Grace — who has another breakdown because she is hurting and carrying the weight, impossibly, of Jackie’s decisions — that they should take dance lessons together. That’s good, actually, because dance solves everything (see also: West Side Story, Footloose, Center Stage). Also this week: Akalitus grows a heart but loses the baby (she totally tells the parents the baby DIED and then is like, “Oh, jk!” which is amazing) and Zoe continues to awesomely steal every single scene she is in (along with my heart, in the process).

Next: True Blood, the gayest non-vampire thing on TV all week, and the hot girl of the week award.