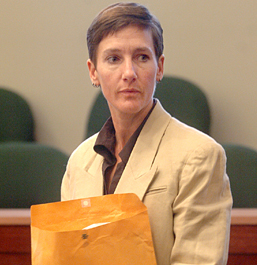 Back in 2009, a lesbian couple, Lisa Miller and Janet Jenkins, broke up. Because they had a child, their split was especially complicated; and because the reason for their breakup was that Lisa Miller had embraced evangelical Baptist Christianity and renounced homosexuality, their battle over custody was impossible to resolve cordially, as Miller now believes that Jenkins is a sinner who’s unfit to raise their daughter. Although Miller is the biological mother, Jenkins was granted custody by a family court, a landmark decision. Miller refused to allow Jenkins visitation, and when a court ordered that she hand her daughter Isabella over to Jenkins, Miller disappeared, taking Isabella with her. In 2011, Pastor Timothy David Miller was arrested for allegedly aiding Lisa Miller in her kidnapping of her daughter and escape to Central America.

It now appears that the real agent behind helping Lisa Miller escape with Isabella was Mennonite pastor Kenneth Miller (who inexplicably makes the third unrelated person named Miller in this case). He was convicted of aiding Lisa Miller in disobeying custody orders and committing international parental kidnapping, and could be sent to prison for as long as three years. It now appears that Timothy David Miller only aided Lisa Miller at the behest of Kenneth Miller. He appears to have been part of a “broad network” that Kenneth Miller called upon to bring Lisa Miller and Isabella from the US to Canada and eventually to Central America. Lisa Miller and Isabella still haven’t been located; they were last believed to have been in Nicaragua, where Timothy Miller is based, and which does not have an extradition treaty with the US (which means that Nicaragua doesn’t have an obligation to surrender Lisa Miller to the US if she’s found, even though she was indicted on international kidnapping charges in 2010). Nicaragua also isn’t a signer of a 1980 convention on international child abduction, whose members countries agree that returning an abducted child to its home country is a priority.

Kenneth Miller is technically a free man until his sentencing, although he’s been relieved of his passport. In the meantime, Janet Jenkins has also filed a lawsuit against him and “other people and organizations associated with the case” for monetary damages. She wasn’t in court the day Kenneth Miller, who likely had contact with her daughter more recently than she did, was sentenced. But Kenneth Miller’s supporters and constituents were; after the verdict was announced, they reportedly sang hymns together outside the courthouse as a show of support for the pastor. Kenneth Miller has stated that “I am willing to accept the consequences of my actions… I am at peace with God. I am peace with my conscience and I give it over to God.” He appears to have orchestrated a plan in which a number of American Mennonites transported, picked up, or hosted Lisa and Isabella, out of solidarity with their Christian faith and a desire to keep Isabella from growing up with exposure to a lesbian. 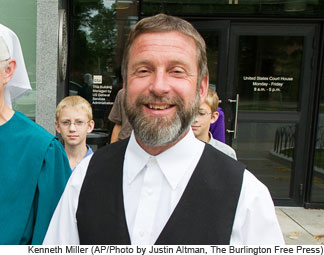 Kenneth Miller’s conviction won’t necessarily do anything to bring Isabella home to Janet Jenkins; Jenkins has expressed a hope that news of the trial will reach Lisa Miller in Central America, or those who continue to provide her support there, and contribute to Isabella’s safe passage home. But for now, much of what this trial seems to have done is highlight that even when, against all odds, lesbian parents are counted as legitimate by the US government and legal forces back them in trying to be the parents they want to be, there are still extensive networks of support ready and waiting for anyone who disagrees.  Appallingly, there are still those who not only think lesbian parenting is criminal, but think it’s quantifiably more criminal than international kidnapping. Janet Jenkins hasn’t seen her daughter since 2009, and while Lisa Miller is certainly to blame, there’s also a whole network of people willing to risk jail time to make sure that Jenkins and her daughter stay whole countries apart.

Rachel has written 1109 articles for us.