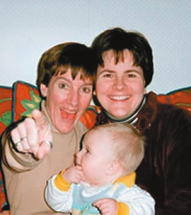 Lisa and Janet in happier times

You may or may not remember the story of Lisa Miller and Janet Jenkins and their daughter Isabella which we’ve been reporting on since late 2009, when Lisa fled the country with Isabella never to be seen again.

Just to recap before we get to the new news: Lisa and Janet met in 1997, at which time Lisa divorced her husband and began a relationship with Janet. They were engaged by February 1998 and eventually moved to Vermont where they obtained a civil union. Janet paid around fifty thousand dollars to facilitate Lisa’s pregnancy and subsequent birth of Isabella, which happened in Virginia in 2002. They then returned to Vermont and lived there.

The couple split in August 2003 and in September 2003, Lisa and Isabella returned to Virginia.

The Vermont court granted Miller primary custody when they split up but also recognized Janet Jenkins’ legal parenthood and the subsequent visitation rights that go along with that. This included daily phone calls and a few weeks each summer.

But then! Apparently, Lisa Miller got cured of The Gay! She became an Evangelical Baptist and freed herself from the chains of homosexuality. Subsequently, she filed to dissolve the civil union and demanded full custody of Isabella lest Isabella be raised in a den of sin/sanity. 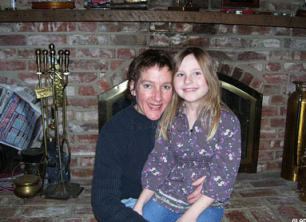 Janet with her daughter

This is already pretty fucking heartbreaking. Anyone who’s broken up with a girl who now claims to no longer like girls at all knows what it’s like to look into eyes that used to want you and find them vacant and cold.

Things got colder, then: Miller didn’t give Jenkins the visits she was entitled to. The court began issuing warnings in early 2009 that Miller would lose custody if she refused to obey the visitation orders. In late 2009, the Vermont family court shifted primary custody to Jenkins because of Miller’s noncompliance and Miller took that opportunity to COMPLETELY FREAKIN’ VANISH, child in tow. The custody transfer was supposed to happen in January 2010.

A warrant was issued for Lisa Miller’s arrest but she has not yet been found.

But progress! Last Thursday, the FBI arrested Timothy David Miller, a pastor from Tennesee and a missionary for Christian Aid Ministry. Timothy allegedly helped Lisa & Isabella flee the country in September 2009, arranging for them to fly to Canada and then to Mexico and then to Nicaragua, where he did his “missionary work.”

In June of 2010, an anonymous person called Janet Jenkins’ lawyers and told her that Lisa and Isabella were living in a beach house in Nicaragua owned by a Phillip Zodhiates, a conservative businessman who has close ties to Liberty University, an evangelical school. The dean of Liberty actually represented Lisa in court on the custody issues, arguing that since Virginia bans same-sex unions, Jenkins had no rights. They lost, obviously. The FBI investigation amped up.

According to the F.B.I. affidavit, which was unsealed in Vermont on Thursday, the pastor arranged for Lisa and Isabella to flee the country. The escape began in Toronto, Canada, where on September 22nd Lisa & Isabella took a Mexicana Airlines flight to Mexico City and then, from Mexico City, flew to El Salvador.

On September 23rd they flew from El Salvador to Managua, Nicaragua, where Timothy David Miller worked as a missionary for Christian Aid Ministries. (Worth noting — “The existence of  a biological relationship between Timothy Miller and Lisa Miller has not  been established.”)

An Immigrations & Customs Enforcement Special Agent reports that no border records suggest that Miller has re-entered the country since September 22, 2009.

The FBI built their case mostly on emails between Timothy and his family, which are, obviously, fascinating. Lisa is seen as a victim by the people helping her to prevent Janet from seeing her daughter due to Janet’s “homosexual lifestyle”:

“This sounds a little like Joy Coats how they ruled to give the Grandparents custody. People can be  so unfeeling for the children included. I will be  praying about this.”

“Another big thing right now is CAM higher ups say she may not even go to CAM [Christian Aid Ministries] any more for the protection of  the organization.  That’s pretty sick.  The isolation is driving her  and little Lydia crazy!”

“Sorry, folks, the Lisa subject should currently not be  a topic of  discussion or  emailing.  I t  might soon, or  it jus t  might be  more of  a secret.  Please advise folks about this.  Pray.  Definitely, pray.”

Zodhiates told The Advocate that Lisa and Isabella are totally not at all living with him at all.

As this case goes on it gets scarier and scarier — when Isabella is found and returned to Janet Jenkins, how long will it take for her to overcome the endless indoctrination and brainwashing she’s likely been experiencing under Lisa’s “care”? Records indicate Isabella hasn’t been enrolled in any schools in the area, so she’s probably not learning what she should be learning or even socializing with other kids. And, perhaps most importantly, why are these alleged missionaries of G-d doing things G-d would never, ever approve of?