ISABELLA HAS TWO MOMMIES, KINDA: Lisa Miller is pulling a Bette Porter except unlike Bette Porter, she is wrong & illegal and not the hottest woman of the year.

To recap: Lisa Miller and Janet Jenkins entered in a civil union in 2000. Lisa Miller is the biological mother of Isabella, who was conceived via artificial insemination after the civil union had been finalized. In 2003, the two broke up and Miller fled to Virginia in order to avoid the custody order which granted Jenkins visitation. Once she arrived in Virginia, Lisa Miller announced that she renounced homosexuality and now considered it a sin.

The whereabouts of Lisa Miller cannot be verified currently. She has not answered her phone and does not appear to have had contact with her lawyers in close to a month. Jenkin’s lawyer, Sarah Star, stated that she hoped that Ms Miller was still at her Virginia home. “My client is asking, almost pleading, Ms. Miller to not make it harder than it is. It’s a difficult transition but as adults she is asking her to not make it any harder than it needs to be,” according to Star. 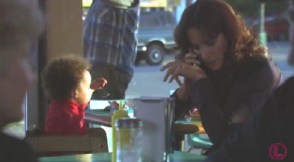 The filings regarding the stay talked about the difficulties involved in the transfer. According to Miller’s lawyers, “The potential effect of any change in Isabella’s housing, school, community and environment could be to ‘induce devastating trauma.’” Liberty Council lawyer Rena Lindevaldsen was quoting a doctor retained to testify on Miller’s behalf. Ms Lindevaldsen also claimed that Jenkins was disdainful of Miller’s religious beliefs, and that Isabella attended a Christian school and held the same beliefs. These beliefs included that homosexuality was a sin.

So if you see an ex-gay asking for a f*cking sippy cup in Tijuana … no really this is serious business. Perhaps she is being hidden away by Exodus International.

ARGENTINA: Latin America had it’s first official gay wedding yesterday. An Argentinian couple who tried to get married in Buenos Aires last month decided to head farther south to Ushauaia rather than wait for the capital city’s courts to allow their marriage.

Technically, gay marriage is illegal according to Argentina’s civil code, but it isn’t unconstitutional. 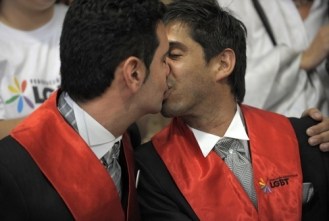 SCOUTS: An LAPD youth program ended it’s association with the Boy Scouts because of the scouts’ anti-gay policies: “It’s bittersweet in the sense that the Boy Scouts or Learning for Life have been part of this for a long time–in name only–but the LAPD is committed to a better program and we can do that without having discrimination,” Police Commissioner Alan Skobin said. (@edgeboston)

SMEAR TACTICS: An Illinois race for a Senate seat has turned dirty. One candidate in the GOP primary, U.S. Rep. Andy Martin, is trying to hurt his opponent by spreading probs false gay rumors in an attack ad.

Ooh, a homosexual club! I bet they play Glambert at their meetings! Oh wait, they’re Republicans. I don’t know what Republicans listen to.

But seriously, I’m really tired of gayness being used as an insult. Way to set an example, Martin! Also, Kirk is in the military right now, so that ad could have serious consequences beyond his candidacy. Not cool. (@chicagosun-times)