As part of the Tribeca Youth Screening Series and launched as HerStory Now: Celebrating The Power of The Everyday Woman, Mosquita y Mari is set to screen Monday, January 14th (today!) at the Brooklyn Museum.  I’m going to be there. You should too. Maybe we could hold hands in the dark. If that’s too weird for you that’s totally understandable and don’t worry because the Tribeca Film Institute has grander plans for us than just showing this film. The Youth Screening Series is one of those arts based education programs that make me love New York and any other cities that recognizes the importance of embracing and dissecting the world of visual arts with kids and teens.

The Tribeca Youth Screening Series is a free-of-charge program that brings New York City public middle and high school students and teachers to screenings at Tribeca Cinemas and during the Tribeca Film Festival…Students are exposed to independent films, filmmakers, and subject matter not typically explored in mainstream Hollywood fare, and teachers are supplied with a film text that can serve as a unique supplement to their humanities curriculum.

This entire program is a hallelujah moment for someone like me, who is new to being an educator but has a background in independent DIY filmmaking. There’s so much undoing that has to happen when I talk to the teen participants in my photo/video program about films. Fuck it, there’s so much deconstruction that takes place when I discuss films with my friend who don’t work in the arts. Here’s a mainstream movie viewing experience, that everyone myself included is guilty of:

4) Sit in the dark with strangers plus one barrel of popcorn and a river of soda.

the closest pic to ‘queers in a movie theater’ I could find.

5) Watch 15 minutes of trailers for other movies kind of like the one about to play and one random trailer for a movie that might suck worse than anything you’ve ever seen.

8) Tumbl, tweet, facebook about movie while eating somewhere. Maybe discuss movie over beers. Forget about movie in a few days.

That isn’t enough, especially when some films dive into our DNA find the bits that makes us who we are and blast them onto a screen. That isn’t enough when some films transcend the grandiose Wal-Mart quality of an AMC theater, push past our easily swallowed assumptions of each other and give birth to the glorious heartbreak of reexamining the world. The Tribeca Youth Screening Series provides the space needed to digest these groundbreaking films and the proper tools to do it as a community of educators, regardless of age or titles. And we get to do all of this, with the brilliant individuals who created and produced the films in the series.

So reserve a ticket, bring your class or your baby sister and come see Mosquita y Mari with me and stay for the discussion with the cast & crew.  I’ll also be writing a review of the film but in badass brief-ery, here’s a little about Aurora Guerrero’s debut feature film from the official Mosquita y Mari website: 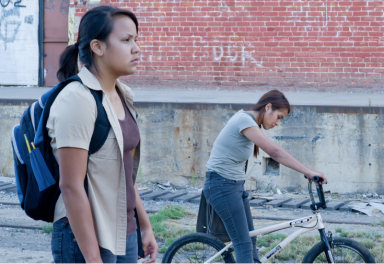 Mosquita y Mari is a coming of age story that focuses on a tender friendship between two young Chicanas. Yolanda and Mari are growing up in Huntington Park, Los Angeles and have only known loyalty to one thing: family. Growing up in immigrant households, both girls are expected to prioritize the well-being of their families… As their friendship grows, a yearning to explore their strange yet beautiful connection surfaces… Mounting pressures at home collide with their new-found connection, forcing them to choose between their obligations to others and staying true to themselves.