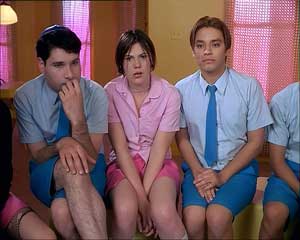 An Indonesian tae kwon do instructor, Sj, has been charged with kidnapping after using her martial arts skills to infiltrate a “sexual orientation class” where her 15-year-old student and lover had been sent by her parents. This is a real headline. The student in question, Tn, is fifteen years old, and has been studying tae kwon do with Sj for two years. Her parents sent her to “sexual orientation classes” after Tn went to live with Sj for a month, and confessed that she had fallen in love with her teacher and had “sexual intercourse” with her. Tn was taken/rescued/last seen on September 17, and while police are investigating, it’s still unclear whether Sj can be charged with any offense under Indonesian law. Homosexuality is not outlawed there, although there is a higher age of consent for homosexual relationships than heterosexual ones (18 years old). The heterosexual age of consent is 16 for females and 19 for males.

We cannot think of a single piece of commentary to make that is not culturally insensitive, completely ignorant and othering, or otherwise totally misinformed. Furthermore, we are pretty much at a loss as far as the age difference/consent issue goes, especially given that we only have a very few unsubstantiated facts to work with (Tn’s “confession” of “sexual intercourse” was repeated to the media secondhand by the National Commission for Child Protection, the same organization that placed Tn in classes to “cure” her of homosexuality.) Also, we keep thinking of that part in the Vagina Monologues about lesbian statutory rape, and our friends who have similar tales of underage dating who seem okay with it and that writer we like who has a girlfriend 30 years younger than her and um, But I’m a Cheerleader?

Really, the only reaction we can pull together is OH MY GOD, IS THIS A REAL THING. Did this happen. LESBIAN MARTIAL ARTISTS RESCUES UNDERAGE GIRLFRIEND FROM SEXUAL ORIENTATION CLASSES. Jesus Christ.