So, backstory: once upon not actually a super long time ago, I was an overachieving high school student at a high school for overachievers and it seemed really important to get into a fancy college for overachieving college students. In this kind of environment, a completely insane kind of collective obsession forms between you and everyone else you know where you keep track of each acceptance and rejection received by anyone you had ever met.

This included a sick kind of oppression-olympics calculus, like “Well even though _______ doesn’t speak Spanish at home her mom is still an Argentinian citizen, right, so probably that’s why she got into Stanford, but maybe if I include my essay on Assata Sha 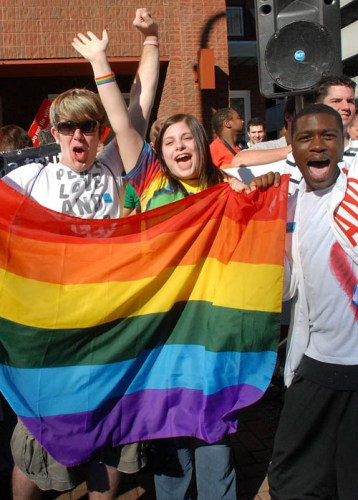 kur as a writing sample someone will make assumptions about my ethnicity and I can get financial aid at Brown!” I was aware at the time that this was crazy and completely out of line, but at the same time couldn’t help wondering kind of petulantly why my particular marginal identity didn’t seem to “count,” why I couldn’t be awarded points in this weird contest for liking girls. Well, confused seventeen-year-old me, now you can! Maybe!

It seems like Ivy League schools may now be considering applicants’ queerness (albeit most particularly the intersection of queerness with their political or activist stance) when deciding who should receive the proportionately very few spots in their incoming classes. The University of Pennsylvania and Dartmouth have both begun specifically reaching out to applicants who have a clear interest in GLBT issues based on their resumes or personal essays. It’s confusing because it doesn’t seem like any colleges are volunteering their new Recruit Baby Queers plan, and it’s a little unclear how anyone knows that this program is happening in the first place.

Mention the idea that an LGBT student in some way gets extra admissions points to Jordan Pascucci, an admissions officer at Penn who’s a lesbian, and she disagrees. “Not at all,” she says. “The reality of it is that this outreach is no different than what already happens with almost every other group on campus. All the cultural resource centers do this already, and it’s a shame that it took so long to happen with the LGBT community.”

Furthermore, the article makes a point of saying that being gay only helps as much as, say, being the first in your family to attend college, so it’s not an equivalent to that status so coveted by angsty white academically elite seventeen-year-olds: Being A Student Of Color. We are told that “In some students’ cases sexual orientation can weigh in the admissions committee’s decision, depending on how much the student tries to disclose and how much is appropriate,” says Irena Smith, a private college consultant in Palo Alto, California. “But I think a student’s orientation would also need to feed into something either like a really strong sense of self-awareness or a willingness to organize politically and socially and form a support group or start a gay-straight alliance. I think admissions officers are more savvy than to just say, ‘Here’s an LGBT kid—we don’t have enough of those.’

What does this mean for the future of college-bound queers? It’s hard to say. Maybe this will make it easier, especially for gay kids from low-income areas who might find it hard to attend college otherwise, and for kids who need to leave their homophobic home communities and are counting on college to let them live more freely. Maybe this will ultimately change nothing about the sick one-upping that college application season always brings, and straight kids will just start joining GSAs to have the words on their resumes. Maybe this is an opportunity to reflect on how outrageous this process is anyways, and how ridiculous it is that for three months out of their lives ridiculously over-privileged people tear apart their marginalized friends and acquaintances for getting “special treatment.” How exciting! Let’s find out!

But of course the sad truth is that no matter what this may or may not say about the future of college admissions, it still doesn’t really change the landscape w/r/t what it feels like for a queer in college. Most colleges still aren’t that “gay-friendly” – less than 8% have LGBT-inclusive anti-discrimination policies – and even those that are fall pretty short of our ideal. A just-released study on gays in college reveal that a quarter of them have experienced harassment, and when looking at only transgender students that number rises to almost 40%. More than half said they hide their sexual or gender identity to avoid intimidation. Campus Pride’s study says that one-third of students have considered leaving their schools because of the “challenging climate.”