Hey there, peppermint patties! How goes your December? Last night I made apple sangria, finished decorating my tree and watched Nightmare Before Christmas – which I now realize it would fit right in on Laneia’s list of things to watch when you’re not sober. (Though it would probably be terrifying.)

Speaking of not being so sober, Ali followed up her tasty mulled wine creation with a recipe for everyone’s favorite seasonal drink staple, eggnog! Aside from being festive, you can pretend to be Gaston from Beauty and the Beast while you drink it.

This week’s shiny new gift guides are for the cooks and foodies among you as well as the coffee and tea fiends. Oh, and the whole team joined forces to make the ultimate holiday gift guide. They know what your girlfriend wants.

Malaika talked about being a queer girl in the winter and fitforafemme told you how to dress the part. If you don’t want to brave the cold why not stay indoors and stencil a thing or roast some chestnuts? Just going to chill on the couch and watch reality tv marathons on TLC instead? It’s cool, Honey Boo Boo might actually be our most misunderstood southern progressive icon.

Remember how you voted for the 100 Best Lesbian Memoir and Fiction books? The full list is up! And remember how smart/clever/funny you were in that one comment that one time? We do!

On Glee 410 Recap: Swan Song Of Myself

The Snaps Award to Ash: “[…] the problem isn’t that Brittany is dating Sam, not directly anyway, it’s that we wait so long for the only lesbian relationship this show has had and then it’s over, we see nothing else like this with Santana and with so hardly any build up Brittany is dating another man. It’s also that we’re being mocked for wanting to be able to see relationships like ours on tv, and it’s being said that we are unreasonable for expecting this from a show that sells itself as being for those who don’t fit the societal norm, a show that they can see themselves in.”

The Get Mugged Award to Catjay:

The Breaking Dad Award to Digger “Last Christmas I got my Dad a brewing kit similar to the one Ali listed and he insisted on telling everyone I bought him a meth lab!”

The Make The Yuletide Gay Award to celery and bookbound: 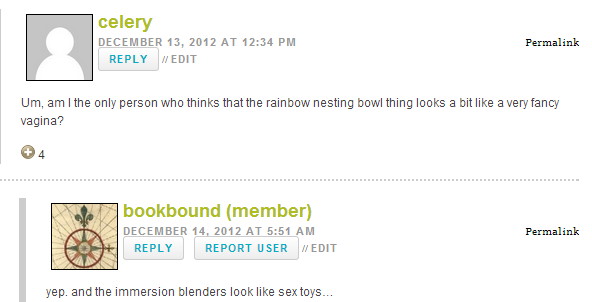 On Things to Look At When You’re ‘Not Sober’ or Even When You Are, Whichever, Pt 2:

The Wait Until You Discover Magic Eye Award to Lone Wolf: “Sometimes I scare myself with what turns me on.”

The SEO Award to milf-in-training:

On Yoko Ono’s Cover of Firework Makes Everything Okay:

The Abbey Road (Not the Bar) Award to Bar: “HELP! she needs somebody.”