It was Straight Emmys week this week, and while it wasn’t super gay, it was super exciting! Carmen ran down all the best fashions for you. And speaking of fashion, Kayla’s got that Carson Shaw Style Thief you’ve been asking for. Lots of other cool stuff this week, too: The Imperfects has an amazing asexual character, and Valerie Anne wrote about it. She also wrote about the new vampy queers in Vampire Academy. Riese updated our The L Word: Generation Q season three mega-post with news about Rosie. Kayla introduced you to the bisexuals of Bravo’s Real Girlfriends in Paris. Carmen reported on our new nonbinary castmember on SNL. Heather wrote about the new lesbian polar bear moms on Peppa Pig, Beth Ditto’s country superstardom on Monarch, and the chaotic bisexuals of your dreams on Harley Quinn.

+ grown-ish wrapped up the first half of its fifth season this week and the midseason finale included a return visit from Nomi! She returns to Cal U to support Doug in his effort to launch a music festival. Thrilled to be off mommy duty for the weekend, Nomi is ready to turn up, even chatting up one of the festival’s female performers. Ana and Vivek volunteer to run interference with Phil but Nomi insists that everything’s cool: she and Phil are in an open relationship and she’s free to hook up with whomever she wants.

YAY! for grown-ish finally remembering that Nomi’s bisexual but I’m surprised that they wasted an open relationship storyline on a character that’s not even on the show anymore? — Natalie

+ This probably means nothing but Jennifer Walters was wearing a rainbow shirt in this week’s She-Hulk and even if it doesn’t mean she’s queer, I’ll take it as a little nod to us anyway. Because you can’t stop me. — Valerie Anne

Last season, in an effort to help Ralph Angel avoid prison, the Bordelons gave up their family land to Sam Landry. In place of the sugar cane that’d grown there for generations, Landry planned to build a strip mall on the property. Thankfully, Nova and her boyfriend, Dominic, establish the land’s historical bona fides as the burial ground of the Thibodaux massacre. The designation thwarts Landry’s efforts, momentarily. On her father’s behalf, Tegan Price Parker asks the town council to reconsider the historic designation. Nova leads the pushback.

“My ancestors, our ancestors have endured enough suffering in life. In death, we need to allow them to rest in peace,” Nova insists. “The land was designated a historical landmark by the state. I ask that the council respect that and not allow it to be destroyed for greed. If we do not honor our past, we dishonor our future.”

But her cries fall on deaf ears and the Landrys win the right to build on the land. Still, Nova is undeterred. She persists in finding a new way to fight back: by using the power of her pen or by staging a protest on what was the Bordelon land. Nova contemplates what’s next as she sits next to Billie on the back of a pick-up truck, drinking 40s…in a moment that feels as true to rural Southern life as anything else this show has ever showcased.

As she continues to fight the good fight on behalf of her family, Nova’s personal life is inching closer and closer to mess. She invites Mo to conduct their interview over lunch but Mo suggest drinks instead. Nova eagerly accepts and Ralph Angel just scoffs…he knows just as well as I do that Nova’s gonna pull a Nova.

At the bar, Mo and Nova maintain their easy rapport, bonding over a shared experience of not fitting in. Mo asks Nova if anyone’s “tending [her] garden at home” (ugh, the dialogue!) and it takes Nova three tries before she acknowledges Dominic.

First she says, “well, not at the moment,” which sounds like a no. Then she changes course: “He’s out of town” which sounds to me like “technically yes but maybe no?” And, finally, she lands on “but yeah, I do” which sounds like a begrudging acceptance of the man she claims to love. She directs the question to Mo who admits that she’s still looking. Mo pauses and takes a brief, but pointed, look at Nova before congratulating her on her having found someone. 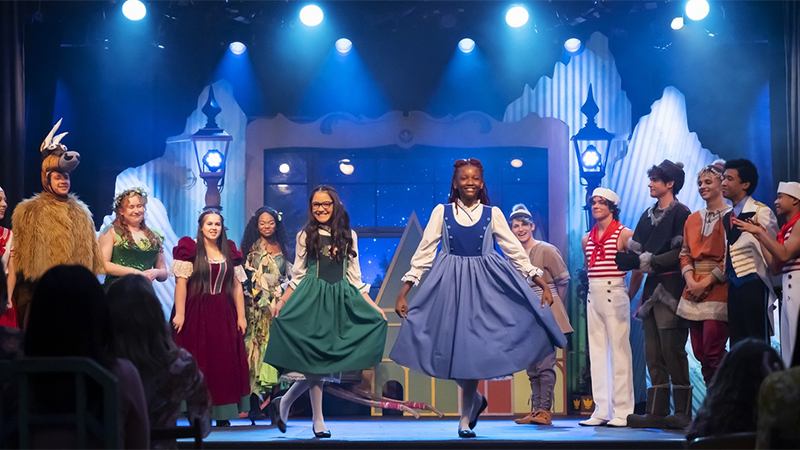 I seriously cannot believe how much I started loving these theater kids in High School Musical: The Series while I was watching and waiting for JoJo Siwa to show up. I also can’t believe that almost all of them are queer, in one way or another??? I mean, I understand that’s the thespian way, but Disney’s never been so great at showing it.

This week was is season finale, The Big Show, Frozen: The Musical, which is being live-streamed to promote Frozen: The Musical: The Documentary, which is the reason cameras have been following everyone around all summer. I, personally, have never been part of a theater production, but I can’t imagine it’s much like this. While they’re performing, everyone in the entire cast has time to resolve their season-long dramas behind the scenes. Phone calls to unsupportive parents! Best friends reuniting to share news of chasing their dreams! Hookups and breakups! One thing that’s been ping-ponging around these last few weeks? Maddox’s Big Gay Feelings. She spent most of the summer pining for her ex-girlfriend, Madison JoJo Siwa — but, after Ashlyn came out as bisexual a few episodes ago, Maddox kind of started admitting to herself that she’s got a big ol’ crush on her. She’s just about to confess to her feelings, backstage, when Ashyln’s boyfriend from home shows up!

Big Red foils Maddox’s plans, but when the cast gets a sneak peek at the documentary, it’s pretty obvious Maddox has been pining for her pal the entire time they’ve been together. See you next summer, Camp Shallow Lake!

Raising Kanan 205: “What Happens In the Catskills”

Last week, I caught us up on where Jukebox’s life is going right now, that despite an exquisite voice her music career is not taking off due to her tomboy appearance (even though her Uncle Lou owns the studio), that she moved out of her father’s house and is searching her mother. That was the right time for a catch up, because all of those threads come into sharp focus this week.

Juke hears her song on a demo tape — but it’s not her song at all, its her words being sung by another singer. A pretty “sex symbol” type of singer who Uncle Lou has been trying to turn into a star despite the fact that her voice is more thin than a sheet of paper. Jukebox, never afraid of a lil confrontation, goes to ole girl’s house and waits!! In front!! Of her door!!! Which I’m sorry, but is just hilarious to me, anyway the non-singing singer says to take it up with Uncle Lou, and that’s exactly where Jukebox goes next.

To his credit, Uncle Lous is sensitive to his niece while he explains some really ugly and homophobic realities of the singing business, as long as Jukebox is wearing baggy Ralph Lauren and her hair pulled back with no make up, he can’t make her into a star. The non-singing singer? She’s got the package (just not the voice). He wonders if Juke has ever thought about songwriting? She wrote a hit. And songwriting money, that pays bills. But Juke storms out before they can get into further, lost in her own pain.

This sets the stage for Jukebox, who we have never seen in church before, let alone in a dress!! going to her mother’s church to watch choir practice, completely femme’d out with her hair down to her shoulders. A boy at the church tries to hit on her and for a second I was scared about how far Juke’s gay panic might go, but she turns him down (she has lots of practice, she’s been turning down the boys in her neighborhood for years, a fact that she told Kanan last week she’s getting increasingly tired of). Her mother calls Juke up to the front of the church, she wants her to sing for the choir director.

The chords start for “Mary Don’t You Weep” and the choir begins to hum along, waiting for Jukebox to lead. I know I keep saying week after week “Tony nominee Hailey Kilgore is in this role and no one is watching!! YOU ARE MISSING OUT!!” But that has never been more relevant or clear than in this moment:

Her mom is so proud and Jukebox beams, feeling like her talent is finally being seen on its own merit. That maybe her found family is better than the one she has. But I can’t help but notice, that Jukebox, a Black lesbian who’s mother originally walked out her when she was a baby, might be walking into the soft fur of a lion’s den. Because sure the church loved her voice (who wouldn’t?) but she had to change who she was to walk in their doors. Uncle Lou maybe could’ve been more supportive, but he love his niece for who she is. Her Aunt Raq is a notorious drug dealer, but she beamed with pride the first time Jukebox wore a suit and gave her shelter when Juke left her dad’s home.