The wildest thing has happened to me over the last two months. Or should I say the Wildcat-est thing. (I’m sorry.) I started watching Disney+’s High School Musical: The Series because I heard JoJo Siwa was going to guest star as a lesbian camp counselor — and while I was waiting for her to appear at Camp Shallow Lake, the musical theater summer camp of wildest thespian imaginations, I started loving these dang teens with my whole heart. And, actually, while I was waiting for JoJo to show up, one of the best characters on the show also came out! It’s like this:

The theater kids of East High, no longer content to simply take over basketball games and lunchroom tabletops with their singing and dancing, have descended onto Camp Shallow Lake, where the tap-dancing youths from surrounding high schools also spend their summers. The whole summer is leading to their performance of Frozen: The Musical, and in between the line-readings and choreography rehearsals, etc. they do all kinds of summer camp things like roasting marshmallows, paddling canoes, pining for each other while their hormones run amuck, and sing-sing-singing. 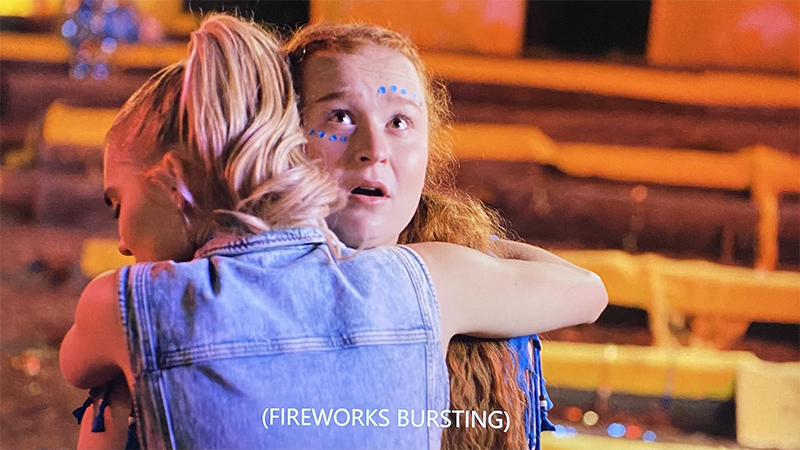 Unlike the original HSM, which only hinted at gayness, and only barely — which remains one of the most homophobic things I have ever seen on TV; they’re THEATER KIDS — High School Musical: The Series has queers running wild and free all over the place. This summer, there’s Maddox, the stage manager who got her heart broken at the last camp. And also there’s Ashlyn, who has been feuding with Val the Choreographer, and who finally realized last week, to the tune of literal fireworks banging in the background, that she’s in an enemies-to-lovers situation. Yeah, she’s got a boyfriend back home, and no she’s never been into girls before, but now: “My dating pool got a little bigger, and so did my heart, and so did my world. I’m still me, just more.” My god, we’ve come a long way since Glee.

This week, it’s prom time! Everyone’s so excited! Except Maddox, who is still kind of reeling from her girlfriend breaking up with her at last year’s dance. Her brother thinks she can use a friend, so he invites the ex in question to the dance. Her name is Madison and she is JoJo Siwa. (Yes, Maddox and Madison. They’ll be married in five years.) Madison understands the assignment and arrives at camp wearing a sparkly glitter rainbow tux, looking like a straight up Dolly Parton, and finally starts processing last summer with her girl. Maddox says she knows she was being clingy, that she didn’t want Madison to leave her sight, but that’s because, before camp, her brother showed their parents all of Mad and Mad’s texts to each other. Maddox thought she was going to get in huge trouble for being gay when she got home and never see Madison again. But, actually, her parents just told her to stop texting after 10pm. The Mads say they missed each other, that they’re glad they cleared up this misunderstanding, and they’ll be in touch when summer’s over. Maddox wants to dance, but Madison says she can’t dance, which may be a meta joke? Can JoJo Siwa dance? I know she can play the heck out of some baseball. 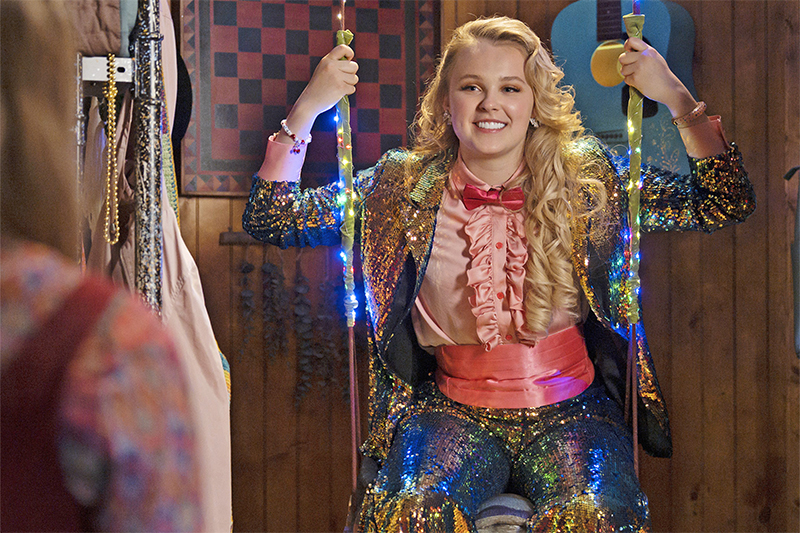 This is somehow JoJo Siwa’s first gay role? And she’s basically just playing herself? I fully believe she owns that tux. I fully believe when her agent got the call about this part, she just plucked five unicorn-flavored suits right out of her closet and ultimately settled on this one.

At the end of the episode, Maddox is riding high on seeing her ex-girlfriend, and then she realizes she’s also developed feelings for the newly out Ashlyn. Next week is the season finale and the Big Production. Who knows what new queer wonders await?