I’m not going to pull any punches: if you like messy superpower origin stories, found family feels, comic-book-esque fight scenes, and slowly unraveling mysteries, with a bonus queer, asexual, South Asian woman? Netflix’s The Imperfects is the show for you.

Netflix’s blurb for the show called it a cross between The Umbrella Academy and The Boys but I’m going to have to disagree there. It wasn’t nearly as…gritty as either of those. It has a brighter feel, a happier tone even in the more stressful situations. I would say it’s more like… X-Men’s The New Mutants meets Maximum Ride (specifically the books, but only because I never saw the movies.) The Imperfects is a story about young adults who were experimented on as kids and who are now experiencing some supernatural side effects and have to join forces to get answers. We have Tilda (Morgan Taylor Campbell), a rock star who likes to pretend she’s too tough to hurt; Juan (Iñaki Godoy), a comic book creator who is the youngest of the trio but has more years of independence under his belt than most people his age; and we have Abbi (Rhianna Jagpal), the aforementioned queer, asexual, South Asian woman, and she’s a scientist who is always impeccably dressed. 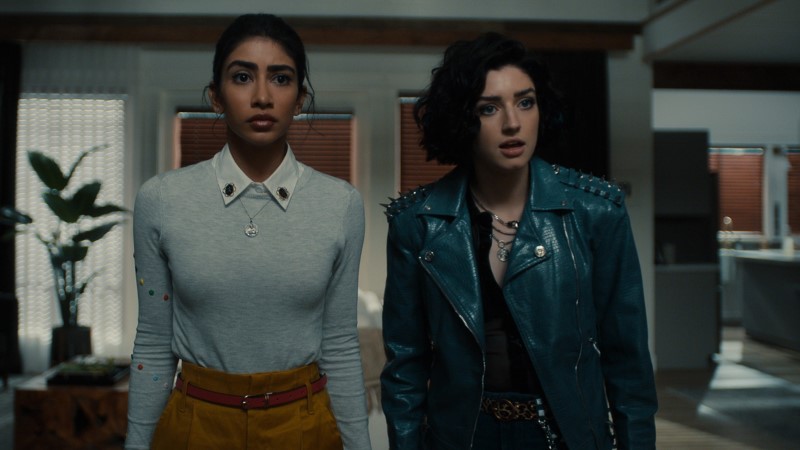 Tilda never said anything about it specifically, but she gave me bi vibes. Maybe it was all the leather jackets, plaid shirts, and ‘fuck the patriarchy’ energy.

Because of their emerging symptoms, this triad is forced to work together, making them the most unlikely of friends, one of my favorite tropes. They also find themselves under the wing of Dr. Sydney Burke (Italia Ricci), who plays another of my favorite roles in stories like this: reluctant guardian. Together, they have to find answers, first by finding Dr. Alex Sarkov, who is played by non-binary Australian Rhys Nicholson.

I don’t care how many times it’s done, I will watch a “learning about my powers” story every day for the rest of my life. It’s my favorite part of X-Men movies, I love it in witch-based stories, all of it. I even love power reveals in stories; like in Umbrella Academy, the characters already knew their powers before “we” the audience entered the picture but I still loved learning about what their abilities were one by one; and then watching them evolve and change. The same is true of this show. The Imperfects struggle with learning what their powers are, how to control them, and how to use them to stay safe as they’re hunted by various organizations. I know it’s a topic that has been beaten into the ground but in worlds where powers make people “others” or outcasts in some way, there’s always a queerness to it that I feel really drawn too. Sure, we’re technically “different” – but doesn’t that just mean we’re special? 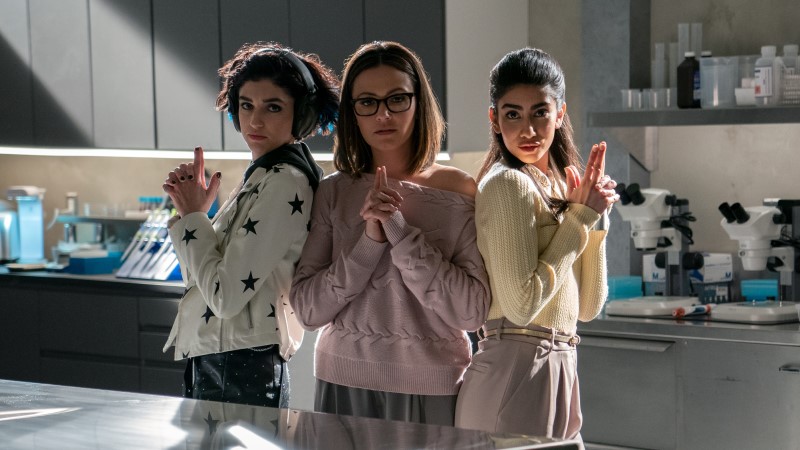 This is a behind-the-scenes photo I found on the Netflix press site that was too cute to not include!!

And isn’t the best way to survive being deemed “imperfect” by society as a whole is to find other weirdos like you, to form your own monster squad and support each other through the hardness and the weirdness? And that’s just what these characters do. Which is a bit queer of them, if you ask me. (This is a compliment.)

This show just so happens to have a literal queer story, too. The first thing we learn about Abbi re: her sexuality/identity is that she’s ace. She says as much, not too long after reuniting with Tilda and Juan, who she knew from the clinic they did as kids but haven’t kept in touch outside of that. I didn’t want to spoil their powers for you but I do have to tell you Abbi’s power because it’s relevant to her asexuality, and the reason she even told Tilda and Juan. You see, she has these pheromones that make people wildly attracted to her, to the point that they’d do anything she said. And at first Tilda doesn’t think that sounds so bad, until Abbi pointed out that actually they seem like an ironic joke to her. When Abbi says she’s ace, Tilda says simply, “Copy that.”

The next thing we learn about Abbi’s sexuality is that she likes girls! Not all asexual people experience romantic attraction, so I wasn’t sure if we’d learn whether or not Abbi did over the course of the season; frankly, I was just thrilled to be able to add another character to the very short list of asexual characters that I wasn’t even thinking about it. (Plus, there was a lot going on!) But eventually the squad tracks down someone else who used to be in their clinic, Hannah (Celina Martin), and she and Abbi hit it off. And as if these feelings were unexpected to even her, Hannah keeps spraying herself with the anti-pheromone spray and being surprised when the pitter pat of her heart didn’t dwindle. 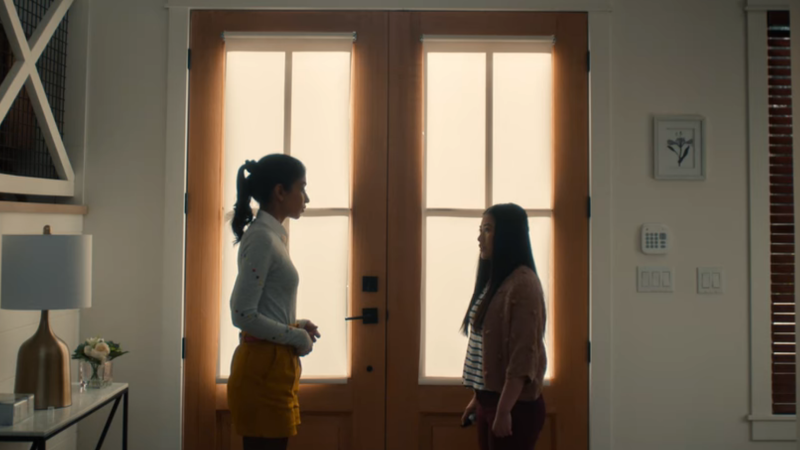 Their early interactions were the adorable kind of awkward.

Tilda and Juan are adorably supportive when they first notice these sparks; Tilda even braces herself protectively when Abbi tells Hannah that she’s ace, and she relaxes and beams when Hannah’s answer is the correct one.

Of course, things are not all butterflies and roses for Abbi and Hannah in this chaotic romp of a show, but it’s an important thread that runs through the show, and while it’s not the first (Genera+ion, at least, has explored this) it is extraordinarily rare to have a female character who has both said out loud with their mouths that they were asexual, and also expressed romantic interest in another woman. Even in the examples I found just now while Googling to fact-check myself, a lot of the even asexual characters, aromantic or otherwise, are listed were only confirmed by creators on social media off-screen. So this is a big deal! And giving the very pragmatic and logical Abbi an emotional entanglement was very smart, because it was so interesting to watch her wrestle with that as the season goes on.

Also this is neither here nor there but Rekha Sharma plays a hot antagonist and this is relevant because a) she has played gay before, as recently as Roswell, New Mexico…and b) I’m gay and I like her so there. 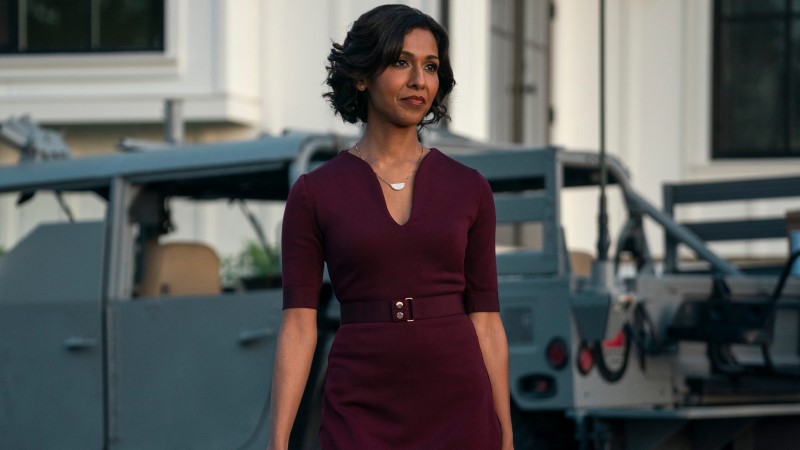 I love when she plays an antagonist that I put off calling a villain because LOOK AT HER.

The whole season feels like a long, fun movie, with everything from gory scenes with too-red blood, to heartfelt scenes that made me tear up a little. It was also funny. Tilda is especially hilarious, calling people science pirates and responding with dramatic, “oh, fuck me!”s when things don’t go her way. Juan’s nervous little interjections are always cute, Abbi trying to learn to loosen up is fun to watch, and Burke’s feigned apathy always got a giggle from me. It’s a really fun journey that explores themes of friendship, scientific ethics, and what makes a monster.

I do hope you watch this show and enjoy it, and if you do, I encourage you to tweet or post about it on your preferred social media. Too many shows with amazing LGBTQ+ characters have been ripped away from us in the past few months, and the only way to combat that is to keep showing up for the shows that represent us and shouting about them from the rooftops until the powers that be start listening.