The season finale of the shiny-haired teen-lesbian mystery/comedy/drama Pretty Little Liars is finally here and “A is for Answers,” promises to finally put a couple pieces together. And thank fucking god too because I’ve been scratching my head trying to figure out what the hell happened to Alison ever since she popped up all not dead. Wait. No. I’ve been scratching my head since EzrA turned out to be even creepier than we thought and Spencer suddenly had a history of drug addiction that we never knew about. Actually I’ve been pretty confused since Jenna was not blind but then blind again but also a lesbian. Except for I was really confused before that because MonA was A and totally psychotic and then she all of a sudden wasn’t A and she was totally lucid. Well actually things have been pretty confusing ever since Maya died and left behind a video journal everyone forgot about. And since Samara and her gaggle of teen lesbians disappeared into thin air. Whatever happened to her anyways?

Okay. Hold on. I think, really, I’ve just been confused ever since the Liars got that goddamn text in the first episode:

Even what color panties you’re wearing. Blue. I was totally right, right?!

Well now, supposedly, we’re going to know everything! Or at least a part of everything as the promos promise that, finally, “Alison tells all.” 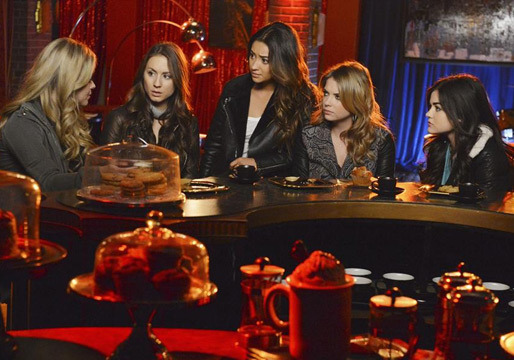 I understand why you wanted to meet us in secret, but why did we have to wear leather jackets?

I can’t say exactly what this episode will hold, or what crazy shit Alison will reveal, but I definitely think some serious lesbian shit is going down. Between Paige’s little tip to the police and Paily’s subsequent breakup, it’s obvious that something is going to happen with Paige. Besides, we already know she’s kind of a loose cannon. Plus the other Liars have already been betrayed by their significant other. Well I guess not Hanna, but that’s only because Caleb had to leave for a magical ghost world; America was just not prepared for a character as lesbian as Caleb. What I’m saying is that something’s happening with Paige. I don’t know if she killed Ali, or is getting real dead herself tonight, but I feel fairly confident she will be prominently featured in all of her shaky, shady eyed, needy, neurotic, obsessive, moody, baby gay glory.

Here are some more predictions/conspiracy theories just to get you guys warmed up: 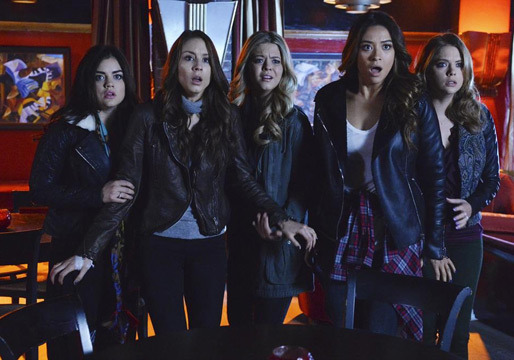 In which we discover that A is just, like, Mona again.

Well if any of these things happen, I’m not going to be the one getting all the good moments spoiled by Tumblr. I’ll be right here in on my couch at 8pm EST savoring every juicy moment and back here later tonight with a lesbian feelings update!

Well guys we’ve been hoodwinked again. Yup, another episode promising answers and for every one answer we got a hundred new questions. Plus no lezzie action! No Samara back from wherever the hell she’s been. No Maya from the dead. Not even a heartbroken Paige riding in on her bicycle with a tupperware of kale. L’sigh.

Or scissor you with my legs in friendship

But don’t worry, we did get a hefty dose of Alison just as promised. While she didn’t exactly tell all, she definitely tied up at least a few loose ends.

So exactly what questions got answered? Let’s recap, in no particular order, some answers we got tonight:

I’m most excited to finally find out that Alison pushed Ian from the bell tower. That question has been haunting us since the first season! I was also quite pleased to hear that Alison drugged Aria and Hanna. I always wondered how they slept like rocks all night long while the rest of the town went to shit.

Other new developments included Cece finally getting arrested, the whole Hastings family (including Melissa) getting interrogated and Jessica DiLaurentis getting killed, dragged and buried! 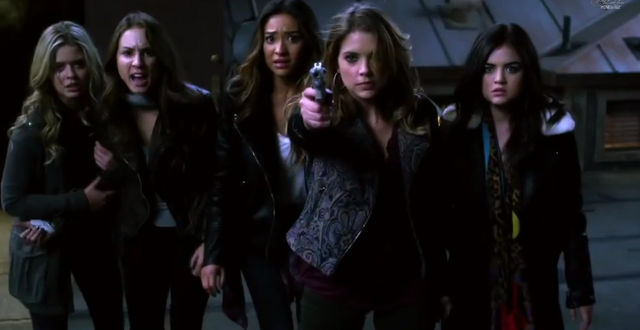 Wait. Did I forget to mention the biggest cliff hanger of them all?! Ezra was shot in the stomach!

Did I spilled tomato sauce?

This is NEVER going to wash out!

Just fulling the PLL season finale quota for a Liar’s significant others in mortal danger! There’s gotta be one each season or abcFamily loses their Shocking Conclusion Cred.

Don’t worry, there are always flashbacks!

In other news, Ravenswood got canceled so Caleb’s coming back! Get your Home Depot gift cards and matching cat snuggies ready because that between the Paily breakup fallout and Caleb’s return next season is bound to be fun for the whole family! As long as that family is comprised exclusive of teenage girls or fully functional adult lesbians.