As you may have heard, Glenn Beck is going to be leaving his horrifyingly popular show on FOX. It will be the end of an era – an era of shameless and blatant contradictions and misinformation, delivered via histrionic performances so intense they border on the seemingly pathological.

Longtime followers of the Glenn Beck Show will perhaps be aware of the long history of inconsistencies and apparent complete unawareness of past events, even if he participated in them, that Mr. Beck suffers with. There are plenty of examples, but the time that he said “when I see a 9-11 victim family on television, or whatever, I’m just like, ‘Oh, shut up!’ I’m so sick of them,” and then a few years later started “The 9/12 Project” to try to promote the virtue and selflessness that he associates with our collective response to September 11th – well, that might be my personal favorite.

It is maybe not entirely surprising, then, that Glenn Beck professes to be entirely unaware of any homophobia in the Republican party. Specifically, despite the fervent Republican support of DADT, he doesn’t know of any Republicans arguing that gay people can’t fight (the Advocate and Equality Matters note that congressman Louie Gohmert said that “allowing gays to serve was equivalent to sending people in wheelchairs into battle.” (which is really ableist in addition to being homophobic)). Also, he’s confused about why anyone would claim that Rick Santorum is anti-gay, which seems so head-in-the-sand as to be completely baffling. 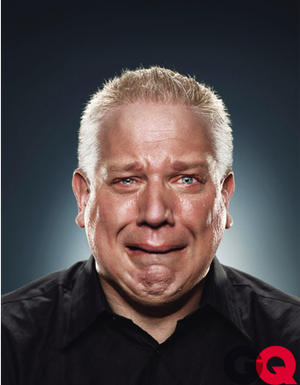 It’s not hard to understand that intensive 1984-style cognitive dissonance has proven to be a major moneymaker for Beck and others like him; it is perhaps less than productive at this point to ask them to acknowledge reality, or even things that they themselves have said and done in the not-so-distant past. In the spirit of educating and informing those who are slightly less hell-bent on living in a fantasy world, however, here are the top ten reasons in rough chronological order why a reasonable person might believe the Republican party to have a problem with homophobia. Enjoy, People Who Are Not Glenn Beck.

1. Serial Attacks On Gay Adoption
2. Donald Trump
3. Republican Attempts To Make “Recruitment” Punishable By Jail Time
4. Gay Marriage, Also Sex Illegal
5. Wisconsin Governor Hates Gay People As Much As He Apparently Hates Everyone Else
6. GOP Favorite Thinks It’s OK To Lose Your Job As Long As It Hurts A Gay Person
7. Republicans Try To Shut Down Art Exhibit Because It’s Too Gay, Is Offensive
8. The Herculean Efforts On John McCain’s Part To Save DADT
9. Ann Coulter
10. Prop 8, Just Everything About Prop 8

Now you can just go ahead and immediately forget about all of that, and you’re ready to be a goldfish with a famous TV show and a million billion dollars! Best of luck, Glenn.