Do you know what tonight is? It’s the Glee season finale, obvs. You know that because you read the title of this post. Are you ready?! You better get ready. And of course, Autostraddle is here to help you out with that, we’ve got our shot glasses lined up and our brows furrowed, ready for the big game. Here’s the preview for Glee Episode 1.22, “Journey”:

And we also have a roundup of everything that’s happened since the mid-season hiatus. So even if you’ve never seen Glee before in your life, you can read that (and also maybe this) and you’ll be all set! And of course, the comments can serve as an open-thread during the show tonight. You guys know the drill.
+ 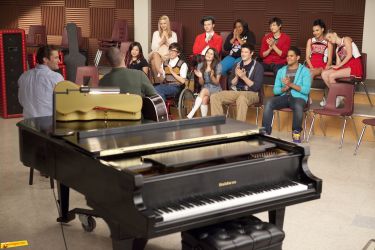 + Sue announces her plans to sabotage something. Another drink if she immediately walks away, leaves the room, or smirks to herself after said announcement.

+ Will tries to rap or perform any aspect of a hip-hop song which exemplifies his inability to properly do so.

+ Either Rachel or Mercedes has a solo.

+ Any of the following characters says an actual line: Mike Chang, Matt Rutherford

+ Brittany and Santana have a “moment” involving physical contact or make a reference to their sexual relationship.

+ Finn & Rachel sing while walking in circles around each other.

+ Rachel wears a blouse/sweater buttoned all the way to the top.

+ Quinn goes into labor/has a baby.

+ Quinn has a baby and names it “Sue Sylvester” after Susan Boyle & Sylvester the cat.

Here’s what Hulu has to offer us in preparation for the big finale tonight:
A behind-the-scenes look at shooting the finale. Everyone in the video seems super fatalistic and sad, and I’m not really sure why because they’re coming back, right? I mean the second season will happen and the world’s not slated to end until 2012. I guess they’re just drama queens!

+
A preview of Rachel and Finn singing Faithfully:

Glee Recap:
Everything That Happened Before Tonight Happened

As any Chuck, Pushing Daisies, or Dead Like Me fan can tell you, it’s hard out there for a quirky show full of weirdos. Yet Glee has found its audience and keeps holdin’ on, despite the fact that it’s chock-full of weirdos and brimming over with showtunes. You’re probs already a fan, but in case you’re not — or in case you need a refresher before the big finale — we’ve got you covered with this crash course on Glee since the mid-season break. 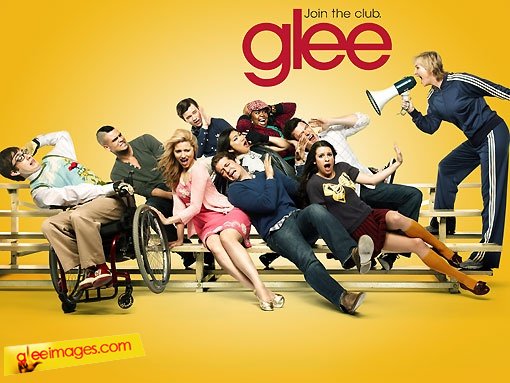 Will Schuester (Matthew Morrison) is the hapless protagonist who can’t ever seem to do the right thing, like pick the right girl to marry. When the show began Will was still married to a self-centered pregnancy-faking bitch, Terri (Jessalyn Gillsing). Since the show’s 2010 return, Terri and Will have gotten divorced and Will has not deflowered the woman he loves, Emma Pillsbury (Jayma Mayes). However he has snuggled with Amber Rhoades (Kristin Chenoweth), and played tonsil hockey with Vocal Adrenaline coach Shelby Corcoran (Idina Menzel). Will is really supposed to be the rock of this show, yet he plays dirty almost as often as Sue does — which is to say, a lot. You’re really supposed to root for Will, and before the hiatus, I did. But since the reurn, he’s been a bit whiny. And the serenade to Sue in the last episode was almost unforgivable, the duets he did with his high school rival, Bryan Ryan (guest star Neil Patrick Harris), were awesome.

Then there’s Finn (Corey Monteith), who’s constantly struggling to prove himself as more than just another lumbering meathead without alienating the football team. After his pre-hiatus messy break up with Cheerio Quinn Fabray (Dianna Agron), he soon had Rachel Berry (Lea Michele) on his arm. But kitten relationship calendars and matching sweaters seemed a bit restricting, so he broke it off with Rachel in favor of the saucy, bi-curious stylings of Brittany and Santana (Heather Morris and Naya Rivera). 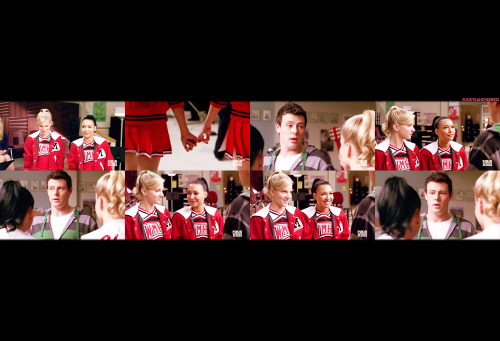 But okay. Let’s pause and talk about these two. Right before the break we were left with a tiny bit of dialogue from Brittany that sent shockwaves through the lesbian Glee following: “Sex isn’t dating. If it were, Santana and I would be dating.” 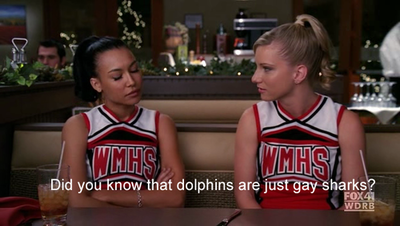 Squwhaaaat!?! But also unlike most random lesbian sweeps relationships, this one had that “no duh” effect — it makes perfect sense. Now we pay way more attention to them, which is good, ’cause Brittany is hilariously, but limitingly, written to be about as deep as a parking lot puddle after a fundraising car wash. Meaning, she’s dumb. She’s really, really dumb: “Sometimes I forget my middle name.”

“They aren’t gay, they’re in high school. Sleeping around a bit is normal, and banging your BFF is NBD.”

So, we don’t really have a gay girl storyline on Glee. But, with three main characters being virgins until recently/still being virgins (Finn, Rachel, and Emma), I personally think its good to have Santana and Brittany balancing the scales. They aren’t gay, they’re in high school. Sleeping around a bit is normal, and banging your BFF is awesome NBD.

Back to Finn! He decided to win Rachel back, but was sidetracked by some mama drama when his single mom started canoodling with Kurt’s (Chris Colfer) single dad. Finn is conflicted: he loves having a father figure to do “manly” things with — talking football, scratch, belching the alphabet, the usual.

But when the ‘rents decide to shack up, Finn starts to struggle. His whole world is changing! What does the only son of a single Mom do when he’s lost his status as man of the family and his new stepbrother/roommate has a big crush on him? Well, hopefully he’ll take Mr. Hummel’s speech about the dangers of the word “faggy” to heart, work out his problems, and look cute doing it.

Sidenote, how great was Mr.Hummel this season? The dialogue itself may not have been groundbreaking, but the fact that a straight parent said things like that aforementioned speech IS pretty kickass. Besides, why does something have to be new to be relevant and important? Maybe we’ve heard it before, but we haven’t heard it a LOT. 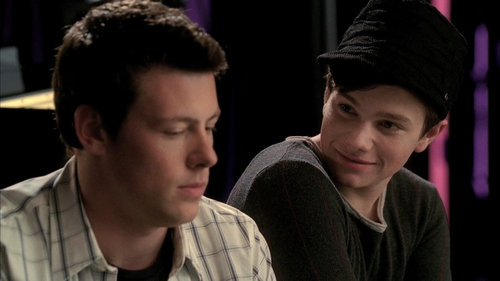 Then there’s Rachel Berry (Broadway’s Lea Michele). She’s has had a LOT going on the last few weeks. So many feelings! The boy she pined after for 13 episodes turns out to be more dud than stud. She almost, but didn’t, cash in her V card. She’s had the whole team turn on her for dating Jesse St. James (Vocal Adrenaline’s main man, played by Jonathon Groff), then turned on her team by secretly dating him anyway. And then, Jesse changed schools and teams to be with Rachel. We all assumed Jesse was a mole for the purposes of sabotage, but it turned out his purposes were (slightly) more honorable: he’d been sent to expose Shelby (his coach, played by Idina Menzel), as Rachel’s biological mom. Which, sidenote, is awesome casting. How do these two actors not play mother/daughter in everything ever? 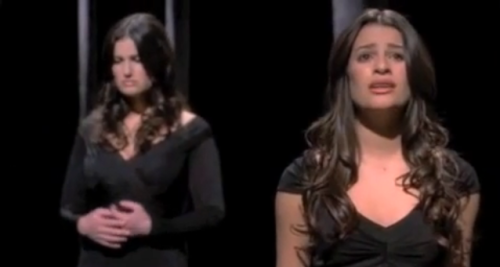 Rachel and Shelby had some issues deciding how the cookie crumbs were gonna to settle w/r/t that insaneness, and handled it true to character — by singing it out. I Dreamed a Dream, you guys! (Let’s pretend the awk Poker Face duet didn’t happen/Idina never sang “bluffin’ with my muffin.”) It was actually kind of touching, even if annoying to me as an adoptive/gay mom. Anyway, it seems like they’ve found a sorta happy medium. Shelby isn’t going to pretend to be Rachel’s mom, and Rachel’s happy to know her biological roots can carry a tune. 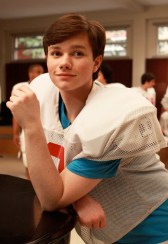 While nothing may ever top the Single Ladies football escapade, Kurt has been super homoFABulous this second half of the season.

Can we all agree that Chris Colfer is great? There’s nothing to complain about with this guy: the voice is believable, his raised eyebrow is adorable, and he pulls off one-liners like, “You need to call me before you dress yourself. You look like a technicolor zebra.”

Since the show’s return, we’ve watched him continue to struggle with coming out and finding his “voice” in the world. Kurt shone very brightly in Laryngitis, when, intimidated by his father’s relationship with Finn, Kurt traded glitter eyeshadow and showtunes for flannel and Mellencamp to get his father’s love back. And we loved it because not once did Kurt’s Dad say to him, “I need you to change.” Kurt’s solo to “Rose’s Turn” and the ensuing heart-to-heart with Dad was one of the season’s highlights, and like the rest of Kurt’s storyline it felt like a struggle I can relate to. It feels organic. And it’s unexpected — earlier in the season Kurt said that his Dad bought him a car in exchange for Kurt’s agreement to stop wearing “long sweaters.” It wasn’t a “risky” choice by the writers, but it was a great choice nonetheless.

All right, that covers a lot of the character development. Let’s talk about those themed episodes! 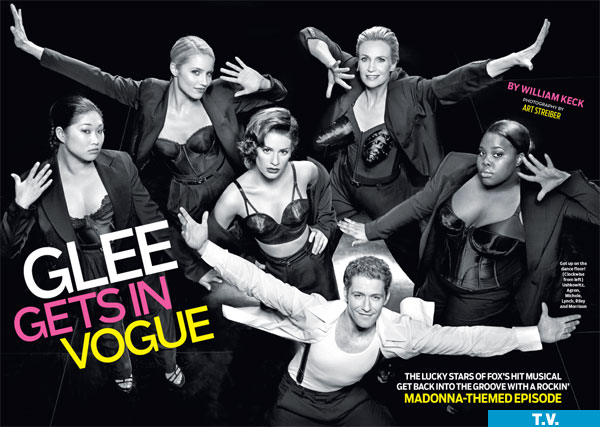 When news first hit that Glee was planning an all-Madonna episode, the entire fandom reacted with a girl squeal. Lady Gaga was the cherry on top of that; we all totally lost our shit.

Not gonna lie, the Madonna episode was a big let down for me. The musical numbers were, as always, awesome. But the story was forced. It made no sense. The entire show was built around the music, not the other way around. 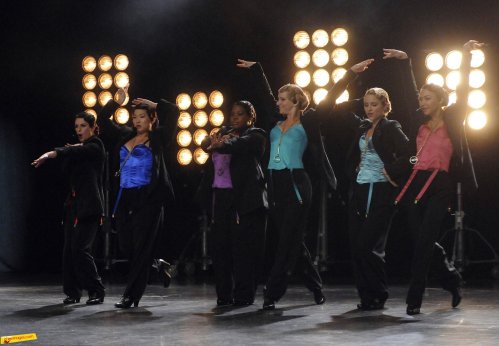 That was a real bummer, ’cause the show’s writing has improved a lot since the break. “Theatricality,” the Lady Gaga episode, fared much better. Whereas “Power of Madonna” relied too heavily on flash and forewent actual content, “Theatricality” eschewed excessive flashiness in favor of actually progressing the storyline (though it could’ve used a bit more ukelele). Furthermore, Theatricality’s message were definitely Gaga-shaped feelings: both Finn’s statement “we’re all freaks together, and we shouldn’t have to hide it” and Kurt’s assertion that he’s “proud to be different, it’s the best thing about [him].” 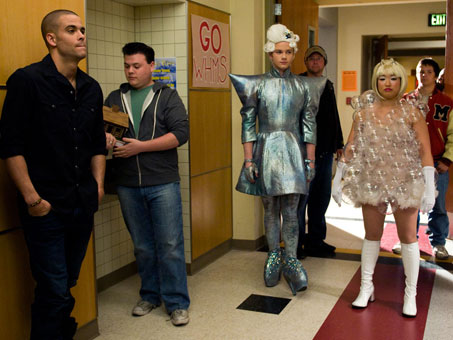 In summary, the second half of the Glee season featured its share of repetitive storylines but hell, at least they weren’t about fake pregnancies. The standout “message” of the Back Nine has been “be comfortable with yourself.” In every episode someone is attacked for self-expression and the team re-learns the same lesson of self-acceptance. Artie copes with knowing he’ll never walk/dance again, Rachel realizes she’s more than just her voice, Quinn’s pregnancy inspires her to reform her former Queen Bee behavior and Mercedes refuses to buy into Sue’s body-hating messages and learns she is beautiful just the way she is. 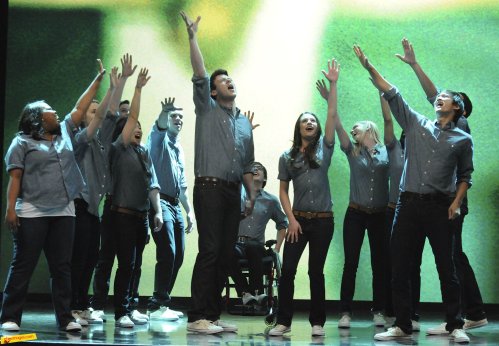 Whereas normally I’d be annoyed by a simple message shoved down my throat 50 ways, it’s a message that can be hard to learn in high school. So I accept it!

Most recently, the show has focused on the competition heating up between New Directions and Vocal Adrenaline in preparation for the big showdown at sectionals tonight in the finale episode. The battle lines have been drawn and the drama has been amped up now that Rachel’s ex and her Mom are on the other team. Also, her Mom is Elpheba from Wicked, which is scary, ’cause that bitch can fly.

Last week’s episode was a bit of a letdown, so we’re hoping tonight makes up for it. Have you been watching? Will you tonight? ‘Cause you should, even if this is your first episode. Share your feelings with us as they happen in the comments!

auto has written 563 articles for us.