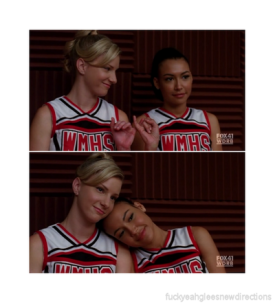 The Advocate interviews Heather Morris (Brittany from GLEE) and confirms there probs will never be a Brittany-Santana moment.

In one very buzzed-about scene earlier this season, Santana said, “Sex is not dating,” to which Brittany replied, “If it were, Santana and I would be dating.” Naya Rivera recently told Maxim that she asked director, Brad Falchuk, “are we doing this because she doesn’t know what sex means, or did we in fact hook up?” Brad apparently told her, “Oh, no, you hooked up!” So what did you think when you first read those lines in the script?
I asked Ryan Murphy about it too. We were like, what does this mean for Brittany and Santana? [Laughs] Because Naya and I are best friends off-camera too, and we’re always together, so that’s always sort of been a joke with the writers. But I think it’s great. I know some younger girls go through confusion, and I had friends who weren’t sure about their sexuality at that age. So even if it’s never spoken about directly, it’s great if someone can relate to that. I’m glad Ryan Murphy touched on it a bit for people who might be struggling with that.

I didn’t think it would ever been addressed again, but Santana and Brittany held hands during a recent episode and tried to lure Finn into a threesome. Santana even said, “You buy us dinner, and we make out in front of you. It’s, like, the best deal ever.” Are the writers just teasing us here, or will there ever be some sort of payoff?
I’m with you because I’m always anticipating getting a script that’s going to be about our love story line, but I don’t think I ever will. Brittany and Santana are just best friends, and you know how sometimes best friends tickle each others’ arms and hold pinkies?

Yes, and I know where arm-tickling and pinky-holding can lead. You don’t think we’ll ever see a Santana-Brittany makeout session?
I don’t think so. I asked Ryan about that, and he said there was no way. He said that since we’re a prime-time television show, he didn’t want to do that.

Some fans may be disappointed to learn that Brittany and Santana aren’t ever going to be a bisexual couple.
I know. We’ll see what happens.

How do you see Brittany and Santana’s relationship?
It’s like Brittany’s a lost puppy dog and Santana’s her owner, so she follows Santana around and does whatever she tells her to do because she doesn’t know how to do things for herself. Naya and I have talked about their relationship, and we do think Brittany’s just dumb and crazy about Santana, like, “I’m her best friend and I love her so much!”

Well we all know where that can lead, but perhaps not this season! Next season is looking good as rumor has it the duo will be upgraded to major character status. In the meantime, there’s always fuckyeahbrittanysantana.

Last night’s episode was kinda depressing, although we were super happy that it featured Kurt & Mercedes & Sue Sylvester & K-Chen! There was a lot of sadness and feelings and not as many upbeat musical numbers. 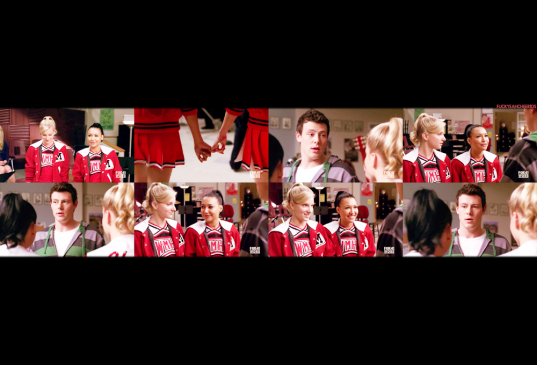 A new video from Tegan & Sara:

The Lambert Army will finally get a chance to check out Adam Lambert live when he kicks off his Glam Nation Tour on June 4 in Wilkes-Barre, Pennsylvania. For the trek, he’ll be bringing along fellow “American Idol” alum Allison Iraheta and guitarist Orianthi.

While most of the announced tour stops in support of his For Your Entertainment album take place in June, more summer dates will be added. The tour winds up on September 18 in St. Petersburg, Florida, with stops all over the country in between. (@mtv)

Ke$ha is done with boys so just if you’re interested. (@dailystar)

Last night, it was time to put away the big hair and glitter, as this season’s competition came to a very dramatic, over-the-top close. (Fitting!) While we know who won, there are many questions yet to be answered: RuPaul’s Drag Race Finale: Wig-Snatching & The Crowning Of A Champion (@jezebel)

The Candy Slice Girls, who did their first ever interview with Autostraddle.com, and whose lovely faces graced our Dinah Shore lanyards, are obviously rising stars, as evidenced by their new video popping up everywhere, “Nothing On You, Betty White”:

AE: What do you think about your huge lesbian following? You’re somewhat of an icon within the community.
SM: Am I? Why?

AE: A lot of readers identify with your music and Lilith Fair has just become such a part of the lesbian cultural landscape.
SM: That’s one of the greatest gifts about music — whether you’re gay or straight, it’s just so fantastic to hear that something I helped to create has a positive impact in a stranger’s life. That’s such a gift for me.

Where Are They Now? My Girl edition. (@huffpo)

A capella. It’s cute you guys, watch it and be happy: