The first two (and a half) seasons of critical darling Crazy Ex-Girlfriend were light on the queer women. While Darryl and White Josh repped the B and G letters of the queer alphabet, there wasn’t much by way of lady loving ladies. Technically Rebecca’s coworker Maya came out as bisexual at the end of Darryl’s amazing song “Gettin’ Bi” in season one but no one has mentioned it since, and she’s not really around enough to know who she’s been dating off-screen.

But near the end of the third season, which concluded on Friday, a wild lesbian appeared. Okay just kidding she wasn’t wild, but she did kind of show up out of nowhere. One minute, Valencia was trying to kickstart a party planning business and met a woman with short blonde hair who thought Valencia was hilarious when she wasn’t trying to be, and the next minute it’s eight months later and they’re at a party they’re running together, being girlfriends and kissing without comment.

It was an exciting development, and also one that, in retrospect, seems kind of inevitable. 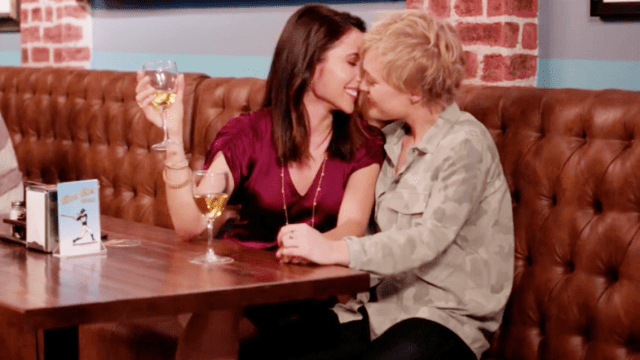 Created by women, often written by women, sometimes directed by women, and with four female characters at its core, Crazy Ex-Girlfriend‘s themes have been feminist-y throughout the series — even the original theme song was self-aware, calling out “Crazy Ex-Girlfriend” as derogatory and demeaning. And while often the storylines still focus on the men in Rebecca’s life, it’s arguable that the point of the show is that her story shouldn’t revolve around the men in her life, and her journey in season three was learning how to exist without the Josh obsession she had developed, and in turn how to not just transfer that obsession to Nathaniel.

This season even delved into Rebecca’s mental health more than it has in the past (though her depression has always been a topic on the show), with Rebecca attempting suicide early in the season, getting diagnosed with Borderline Personality Disorder, and having her therapy sessions become a more regular part of the show. This season also had a whole episode that revolved around men with broken hearts being sad and embracing their emotions, and they’ve called themselves out on rarely passing the Bechdel test (and mentioned that mentioning the Bechdel test techncially fails the Bechdel test since it’s talking about not talking about men).

Because a handful of characters have already come out on the show, I thought they were going to move forward with Valenca and Beth as the nonchalant new norm. And for a while that’s what happened. But then Josh ruined it. He came up to the two of them one day and addressed them as, “Valencia” and “Valencia’s girlfriend” which would have been fine until he looked slightly uncomfortable and added, “because she has those now.” I get that Josh is a dope but it burst my bubble a bit. Luckily, it didn’t burst Valencia’s girlfriend’s bubble, because she just says, “You can call me Beth” and they move on. Josh tries to awkwardly bond with Beth by commenting on how Valencia never wants to be touched, but Beth doesn’t bite, and says she never has that problem. Which was such a good low-key burn that it made me forget how annoyed I was. 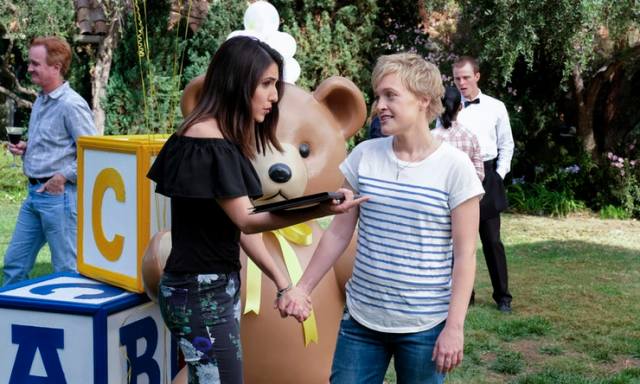 Valencia, however, lashes out at Josh until eventually Beth convinces her to stop taking her small-town woes out on him just because he’s a small town personified, and even convinces Valencia to do a dance with Josh they did when they were homecoming King and Queen. So hopefully we’ve seen the last about Josh being weird around Beth, and hopefully Beth is here to stay.

Aside from that one Josh, well, aside, the rest of Beth’s appearances are casual and no one else makes much of a comment about her being around. With the exception of the doctor in Heather’s delivery room, but he’s just commenting on the sheer number of people. Valencia brushes it off and says that she and Beth are still in a love bubble and they don’t like being apart right now, a phrase Rebecca has used for her own relationship with Josh in the past.

Now, despite what I just described to you, it’s possible that something gayer happened on this season of Crazy Ex-Girlfriend. At one point, Rebecca decides to swear off relationships entirely and gets a “Buttload of Cats” and sings a song about doing just that. (The song even wonders why having a lot of cats is a stereotype of lonely, single people, cats saying they need a better publicist.) Within the song, the lady who runs the cat store ends up falling for another cat lover, the two women holding hands as they exit without selling Rebecca any cats.

I’m hoping next season will see more of Valencia and Beth, and that they won’t end as subtly as they began. I want a big lesbian love song, because I’m selfish like that. (Or queer or bi or pan love song; they didn’t actually specify how either of them identify, and that’s okay with me, because they were very explicit about them being girlfriends.) It was nice to see them not shy away from making one of their main characters queer on top of one of the main sub-plots of this season was about Darryl breaking up with White Josh and deciding to have a baby on his own. Oh and also at one point Rebecca described herself as a 1.8 on the Kinsey scale, but it’s hard to tell if that was just an in-the-moment joke or if anything will ever come from it, but either way, I would love it if more shows would follow suit with not having just a token lesbian or a queer subplot that doesn’t affect the characters not directly involved, but a wide variety of sexualities represented in main, supporting, and recurring roles alike, whose stories intertwine like anyone else’s.

Also if more shows wanted to start singing songs about it, that’d be swell, too.