Representation matters because representation births belief in self, and belief is the magic ingredient that spins dreams into realities. It allows little girls playing with medical kits and dressed as ballerinas to answer with faith and assurance rather than doubt when asked what they want to be when they grow up. It allows women who think the time to pursue their passions has passed to realize there’s no such thing as too late.

Of course, some go through life with far more representation than others. They see their likeness portrayed far and wide from birth to death, and as a result question their abilities and potential, or that there is a path for achievement for them, less. This is not the case for black people, and especially black women. We are vastly overlooked, which is why we’re presently still witnessing first time achievements of black women in fields and categories for which their white and/or male counterparts have enjoyed awards and accolades for decades. Not for lack of talent or skill, but lack of support, access and representation. Close your eyes and imagine for one moment a world where little black girls spend their entire childhoods seeing women like the ones they will become in just as many books, television shows, awards ceremonies, universities, political offices, magazines, advertisements and leadership positions as their white peers do. Really picture it, and then ask yourself: what would that future look like? With her book Little Leaders: Bold Women in Black History, author and illustrator Vashti Harrison takes a beautiful and deeply needed step toward making that future of equality in representation a reality. 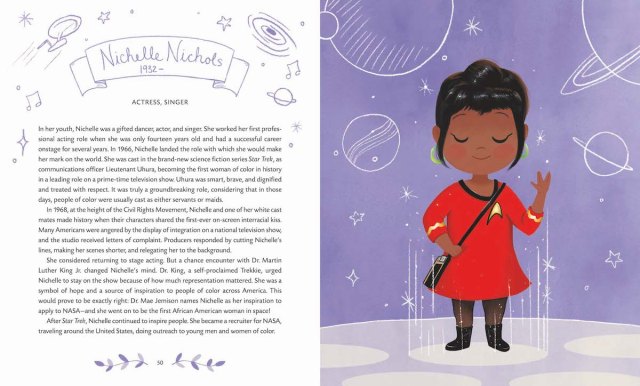 Little Leaders is an illustrated book ideal for children ages 8 to 12 that explores the lives and achievements of 40 African American women who forged paths in the face of adversity, fought for equality and made history through their efforts. Each woman is beautifully drawn in full color next to a mini biography; they’re all depicted as a little girl smiling sweetly, eyes closed, almost as if she’s dreaming or making a wish. Another sweet touch in the illustrations is that the girl’s face remains the same throughout the book to make it easier for readers picture themselves as any Little Leader they relate to.

When I asked about her inspiration for creating Little Leaders, Vashti explained:

“The initial project began on Instagram; I was inspired by other monthly drawing challenges like ‘Mer-May’ and ‘Ink-tober’ so I created a challenge for myself to draw a woman every day for Black History Month 2017. When Carter G. Woodson started Negro History Week in 1926 he wanted to celebrate the stories that were often neglected. I felt inspired to use it as an opportunity to focus on black women specifically, whose stories have been doubly neglected through history. I wanted to learn more about famous and lesser-known figures and share their stories with others. I didn’t expect when I started the project how deeply connected I would feel to their stories — stories of hard work, dedication, courage through adversity, love for craft and love for family. Many of these women didn’t have a choice but to be bold, and I just felt overwhelmingly thankful for them paving the way for others and for me.” 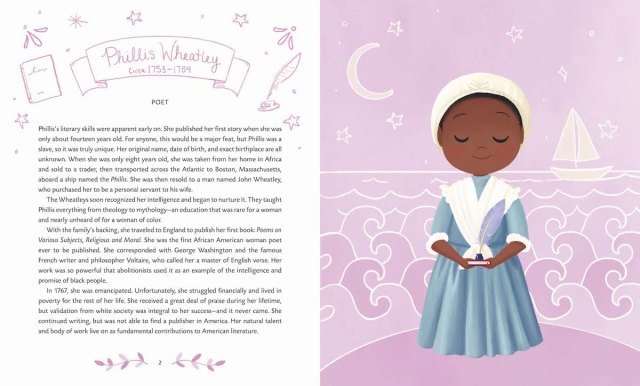 I also found myself overwhelmed with thanks on my first read through Little Leaders, and by the third bio I was in tears. Most of my tears came from a place of joy. I was in awe of the powerful legacies these women left behind and overwhelmed with happiness that this resource that I longed for and would have cherished as a young girl now exists for children today. Some tears flowed heavily from frustration though, because there were so many women in that book that I met for the first time when I read it. It really shocked me. It was a strong reminder of just how lacking my black history education (especially regarding women) as a child in a predominantly white school was, and how sparse the recounting of black women’s history can still be in adulthood. I know I’m not alone in this. Yes, I was taught about Harriet Tubman, Rosa Parks and Sojourner Truth and loved learning about them — but black women who made herstory as writers, artists, engineers and doctors were left out of my school books. Fortunately they are not left out of Little Leaders. Harrison included many of the greats that are near and dear to our hearts like those I mentioned above — along with a few queer pioneers like Audre Lorde and Octavia E. Butler — but also made space for lesser-known women in black history — like poet Phyllis Wheatley, teacher and painter Alma Woodsey Thomas and engineer, physician and astronaut Dr. Mae Jemison too. 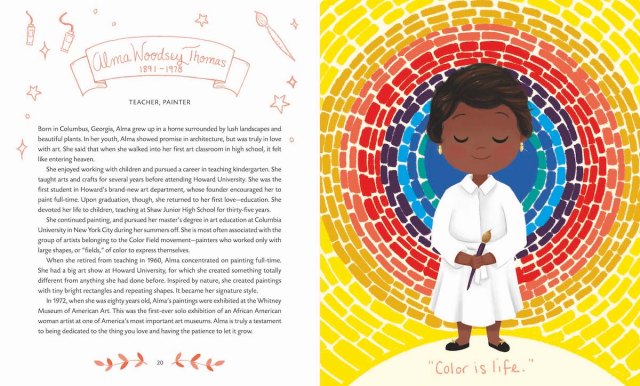 I’d like to think my personal path to life as a creative would have benefited greatly from having some of these lesser-known women as northern stars in my childhood. Harrison speaks to this feeling as well in her explanation of why she chose the women she did for the book, telling me: “I was careful to choose a diverse list to show to children that there are many opportunities, careers, and paths out there. My background is in film, and at graduate school I worked at a community arts partnership teaching filmmaking to high school students. I couldn’t help but wonder what would have happened if I had known about filmmaking at their age. Would I have struggled so much? I just want to make children aware of the possibilities that are out there for them, regardless of whether they already know what they love or haven’t found it yet.” 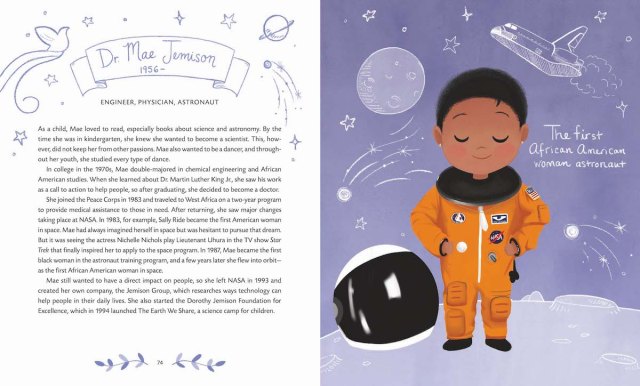 Vashti Harrison has done something incredibly special with Little Leaders and I am so, so grateful that it exists. I cannot recommend this book highly enough, so if you’re going to read one thing this Black History Month, let it be Little Leaders. I also encourage you to buy it for every child (or child at heart) you know, regardless of race or gender, because everyone can benefit from both learning about black women’s contributions to history and learning to truly see black women as a crucial part of the past, present and future narrative. 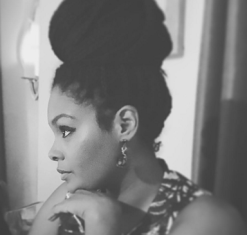 Vashti Harrison earned her MFA in Film/Video from CalArts and BA from the University of Virginia. Her experimental films and documentaries have shown around the world at film festivals. After a brief stint in television as a production coordinator, she is now a freelance graphic designer and a picture-book illustrator. She lives in Brooklyn, NY. We welcome you to visit Vashti at vashtiharrison.com, Twitter and Instagram.