I’m so into George and Johnnie. I’m into its art and character design. I’m into its sweetness and kindness. I’m into the way it perfectly captures the feelings of weird teenagers who are figuring out their feelings and their sexualities. The comic doesn’t have a regular update schedule, so every time I see the comic’s creator Savanna Ganucheau tweet that she’s updated her comic, I can’t help but have a great day. I know that I’m about to read a comic that is all about the importance of friendship and being genuine. It’s a reminder that there’s good in the world and that there are people who want to remind us of that. It’s also a reminder that there are really talented people telling really cute queer love stories. 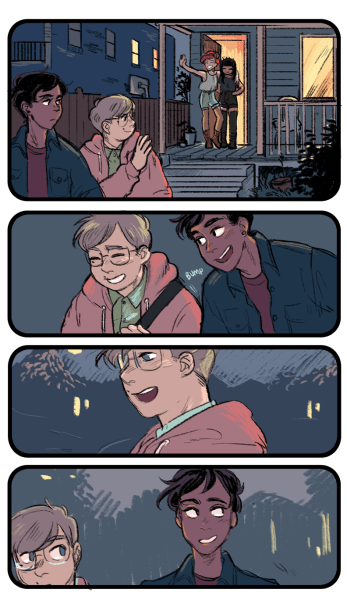 George is a quiet fat kid who gets bullied and doesn’t really have friends. Johnnie is a new student at the school who paints his nails and wears gauges in his ear and is, according to George “a cool kid.” They bond over sharing pb&js, sitting next to each other in class and being genuinely nice people. At first it seems like Johnnie is helping George, because he’s cool and in a band and introduces him to his other friends Alice and Crystal. But soon, George helps Johnnie to feel better about himself, to know he’s not a screw-up and to learn about love. It’s a classic opposites-attract high school coming-of-age story. 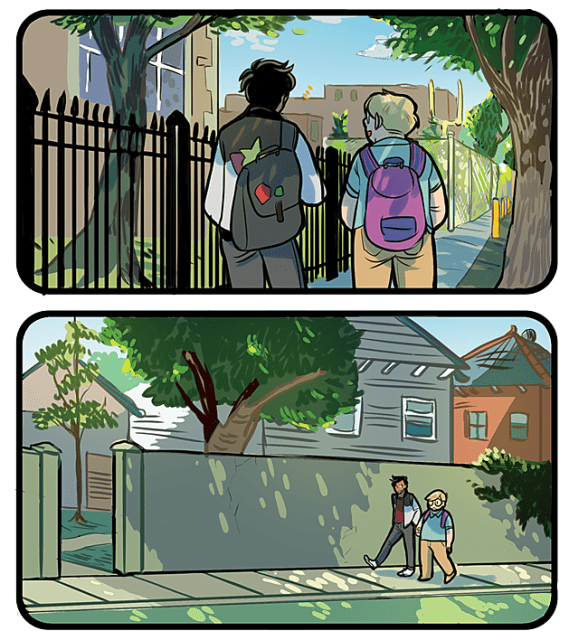 George is one of the cutest, most perfect characters in all of webcomics. He’s nerdy and kind and sweet and thoughtful and doesn’t care about being cool or popular. He only cares about being a good person, a good son and brother and a good friend. I also love him because it’s still pretty rare we get to see a fat character like him who isn’t a punchline. Johnnie is almost as great. He’s a little femme and sensitive and he just wants to do his best. He and George play off each other so well, and compliment each other even better. And then there’s Alice and Crystal, an adorable queer couple who play guitar and drums and go thrift store shopping together. There’s tons of cuteness between them, as well as the expected cuteness between George and Johnnie. 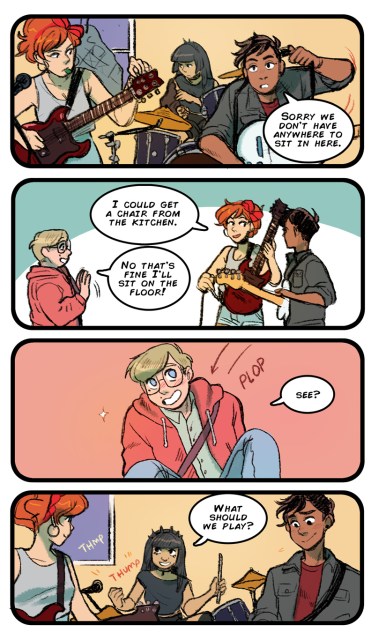 The art is just as sweet as the writing. Everyone dresses in the cutest outfits and look like they all love and support each other so much. Ganucheau is really, really great at coloring and makes the comic filled with lovely textures and fashion that stands out. She knows how to capture facial expressions perfectly and you can always see just exactly how much George is blushing or Johnnie is frustrated or Alice is feeling flirty. I want to see these characters all the time.

You might already know Savanna Ganucheau from her art on twitter, her work on books like Lumberjanes, Adventure Time and Inviader Zim, or from her upcoming graphic novel Bloom, which looks amazing by the way. If you want to be in the know on when George and Johnnie updates, you can follow her on twitter and support her on patreon. The feelings and relationships are ramping up a lot in the recent updates. Things are getting really good. George and Johnnie haven’t kissed yet, and are still working out their feeling for each other, so I’d suggest hopping on board now so you can say you were there when they had their first kiss. It’s gonna be worth it.