Shuri, Black Panther’s technological genius and badass warrior who got to grow up outside of white supremacy and toxic masculinity, is everywhere these days. Between the cool tech, the patent teen sass, and the fact that she literally told a CIA agent what to do while also holding her own during an entire battle, it’s no wonder she’s a standout character from Black Panther. But did you know before she became our favorite new Black Disney princess, she played a baby gay? It’s true! 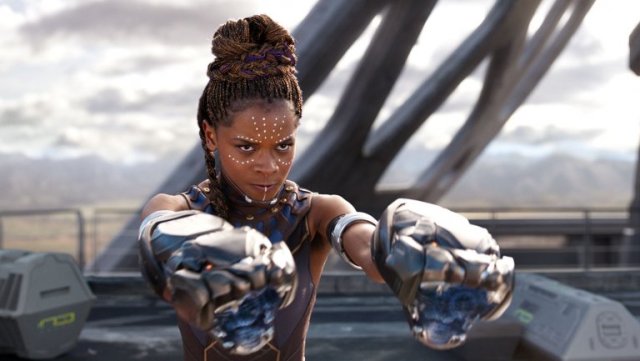 In the Russell T. Davies miniseries Banana, a follow-up to the equally innuendous Cucumber, Wright plays a slightly troubled, naive young lesbian who falls in “love at first sight” with an older, straight white woman at the grocery store. You might know Davies from the L Word precursor Queer as Folk or the modern runs of Doctor Who and Torchwood. His queer sensibilities have evolved, sharpened, and become more nuanced in Cucumber and Banana, showcasing a range of queer characters in short, loosely-connected vignettes, much like a queerer version of Easy. Wright helms “Episode 2” which is at turns alarming, discomfiting, endearing, and surprising — and the end takes a wonderfully bittersweet turn.

Watch Letitia Wright, ever-endearing rising star, talking about her role as “Scotty” the young lesbian here (but be warned, there may be some spoilers).

You can watch her episode as well as the rest of Banana and Cucumber on Hulu. My recommendation is to just watch the Banana episodes with the queer women in it — my favorites, besides “Episode 2”, are “Episode 6” and “Episode 4” (though honorable mention goes to “Episode 3” for the very faint  Naomily vibes).

What are you waiting for? Go watch, and then come back here and tell me what you think.

Raquel has written 23 articles for us.