When I was a Very Online teen, I became obsessed with advice columns. They satisfied my anxiety about doing things “right,” as well as my morbid curiosity about other people’s love lives, which as a totally clueless teen girl was especially strong. But there was also an itch that advice columns helped me scratch: that feeling when you think you’re the only person on earth with a specific experience, and then you read someone else talking about it in their words that sound like they were plucked right from your brain. You feel like a human instead of an alien, and you feel — not alone.

These columns have a long history. The first English-language advice column reportedly appeared in a London periodical in the 17th century. As an advice connoisseur, if you will—, I’ve never been interested in vintage columns because hello! Different times! They’re fascinating, but unhelpful and high-key offensive. But these days, even the advice columns of my teens feel like a relic — outdated in their scope, terminology, and audience. I mean, where were all the non-binary lesbians back then?!

After I came out in my 20s, it became hard to see myself in most advice columns at all. The Advice Column Industrial Complex is overwhelmingly straight-leaning, with the exception of a precious few LGBTQ+ advice columns. It was easiest to find relatable advice during my “questioning” phase when I was still unsure of my sexuality. But there wasn’t as much on the issues that popped up after I’d settled into my life as a queer woman, like dealing with exes or the urge to U-haul. Figuring out I was gay was just the tip of the iceberg, but in the world of mainstream advice, such struggles were rendered invisible. 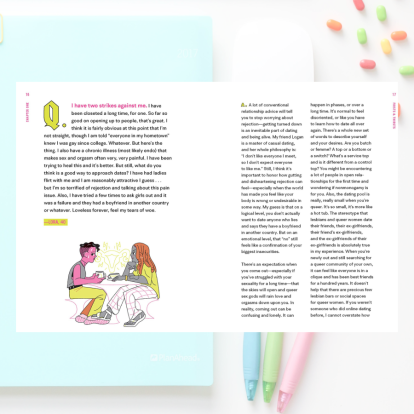 Earlier this year, I discovered Lesbian TikTok, where there is an endless supply of relatable queer content. In some ways, social media personalities are like our new-age queer elders, doling out advice to youngsters and the newly out. On TikTok, @margaretatwoods posts regular “lez big sis” segments to answer followers’ questions while @bde.moves gives practical tips on lesbian sex. In 2021, a queer person in need of answers is more likely to connect to a stranger on social media than write into an advice column. But, like, why not do both?!

That is how Maddy Court, also known as @xenaworrierprincess on Instagram, went from making lesbian Instagram memes to writing a queer advice column. Maddy first made handmade zines filled with the answers to the questions that she was constantly getting in her DMs after her memes started to go viral. As of May 2021, she is the author of her first advice book, The Ex-Girlfriend of My Ex-Girlfriend is My Girlfriend, illustrated by Kelsey Wroten. It’s a combination of everything that I used to love about advice columns and everything that I love about queer social media. Though there is content around coming out, early queer relationships, and finding queer community — Ex-Girlfriend doesn’t put focus on figuring out your sexuality.

Instead, it contains a diverse set of other super queer problems, which made it feel familiar and real in the way that advice columns used to feel when I was a teen. There were several questions that I connected to, like the one from a young lesbian struggling with compulsory heterosexuality, or the one about trying not to let your mood swings mess up your relationship. In this way, the book reminded me of Autostraddle’s advice column, You Need Help. There’s definitely a kinship there — Autostraddle is listed as a resource in the back of the book, and Maddy has written here on the site before.

Aside from the relatability, I appreciated Ex-Girlfriend’s tone. Some advice columnists tend to tear their querents apart for the sake of ~telling it like it is~, which is on-trend with this snarky internet era. But something about a writer purporting to be an expert on strangers’ lives — and being mean about it — rubs me the wrong way. Years of reading about other people’s complex and sometimes impossible to solve problems have made me super aware that there is never just one right answer. People change. Times change. Everyone is trying their best.

Maddy’s advice is far from harsh. She doesn’t presume or condescend, and that’s my favorite type of advice. “I hate feeling like an authority figure or like I’m telling other people what to do. I’m not a therapist or a mental health professional” she writes. Maddy gives advice with the humility of a friend — she’s there to reaffirm what you already know, highlight any blind spots, and give you a gentle nudge in the right direction. 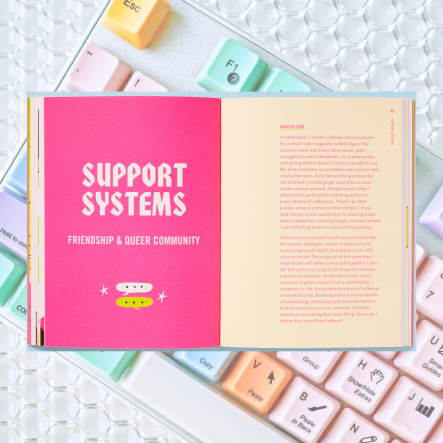 In one section, Maddy responds to a truly heinous question, the kind that makes you want to shake the writer and yell, “WHY ARE YOU PUTTING UP WITH THIS?” The writer, who is 25 and “new to poly,” writes that she’s “been having a tough time setting boundaries with my primary partner.” It would be easy to respond with a snarky quip about breaking up. But this person is probably being gaslighted, manipulated, or worse, and yet some small part of them knows that something is not right. I’ve been there, and I’ve notably never been brave enough to write into an advice column about it. If I had, I would have needed someone to talk directly to that part of me that already knew and feared the answer, not someone to talk down to me — that’s what Maddy manages to do here.

Some of the questions are out of Maddy’s expertise, which is where the guest experts come in. Instead of trying to help folks that she’s not qualified to help (or ignoring them altogether), she taps in other queer and trans folks who are qualified to help — a fair compromise. Samantha Irby chimes in on a question about jealousy, J.D. Samson gently reminds one writer to stop using the phrase “useless lesbian,” and Mey Rude bravely tackles a series of difficult questions about trans women’s survival in the queer community.

I would have loved to see race addressed in this book from a guest expert’s point of view — maybe on interracial relationships, or how to navigate racism in the queer community. Race is always a factor in my life as a mixed Black lesbian; I have to be on guard in white queer spaces, for example, ready to feel invalidated or simply like I don’t belong. Ex-Girlfriend was so inclusive and relatable in other ways that it felt a bit jarring not to see any content around this very common queer issue.

Had my teen girl self been as compassionate, sure of herself, and comfortably queer as I am today, she may not have become so obsessed with advice columns in the first place. But, then again, there’s always that itch: the itch to see yourself in someone else. In some alternate timeline, books like Ex-Girlfriend could’ve been that for me. And after so long of feeling over most advice columns, Maddy’s debut book is an exciting new outlet for my old obsession — and a truly fun read.

Kim Wong-Shing is a writer and editor based in New Orleans who has written for Glamour, Bitch Media, Greatist, Autostraddle, and more. Visit her website or read her weird tweets.

Kim has written 3 articles for us.