Are you tired now? We were so tired after the red carpet, and the show hadn’t even begun! I’m not going to recap the whole show for you because honestly it reminded me of a giant Bar Mitzvah and also because I’m shocked if you’re still reading this epic review, but I will tell you that three awards were announced (the rest will be announced at the upcoming shows in LA and San Francisco) and Smash won Outstanding Drama Series, How to Survive a Plague won Outstanding Documentary and The Amazing Race won Outstanding Reality Program. Madonna presented The Vito Russo Award to Anderson Cooper; the award is presented annually and honors an openly LGBT media professional who has made a significant different promoting equality for the LGBT community. 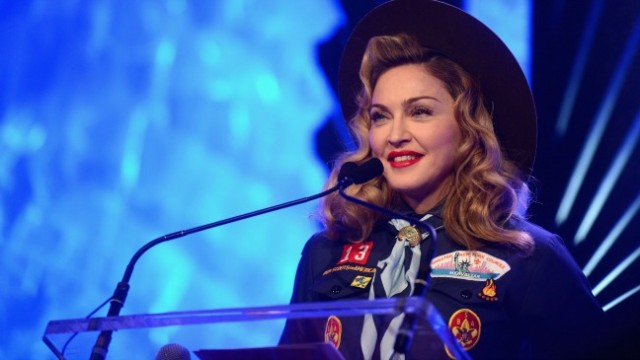 madge via the hollywood reporter

The audience flipped out when Madonna got on stage (in a Boy Scout uniform, no less!) but she basically told everyone to cool their jets and asked the audience to be seated, telling us we weren’t at a concert and she had some stuff to say. She delivered a pretty rad speech, expressing dismay over the homophobia and transphobia still rife in this country, imploring the audience: “I don’t know about you but I can’t take this shit anymore. It’s 2013 people, we live in America, land of the free and home of the brave? That’s a question, not a statement.” She called Anderson Cooper “a freedom fighter [and] a badass motherfucker,” and then added, “you’re intelligent, you’re gorgeous, and you look great in a suit.”

At this point Lizz and I were both an insane combo of exhausted and slightly-tipsy-possibly-drunk, so we did our best to mingle with other media types, accept praise when people told us Autostraddle is sassy and hilarious and eventually make our way to the after party. We headed back to Brooklyn at around 3am, which is way past my bedtime, and we bought Pirate’s Booty and Nutella and woke my girlfriend up and forced her to listen to us talk about everything included in this post and then some. I know, I felt bad for her too. We just had so much fun and really want to tell everyone all about it!

Finally, here are some more awards and (sort of) juicy tidbits from the evening:

+ The New York Post was denied a press pass to the event because of their transphobic coverage.

+ We took a photobooth picture with Cristine and Annie, aka the Degrassi lesbians — thanks Queerty for the cool photobooth attraction at the after party! 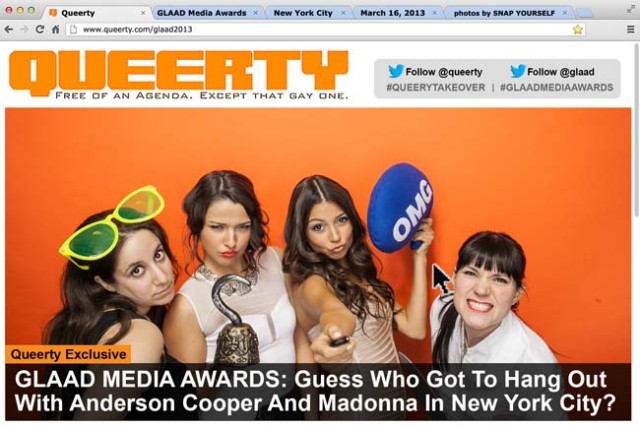 + I spotted trans* author and activist Jenny Boylan, got the courage to go up to her and let her know how much I loved her first book (She’s Not There: A Life In Two Genders), and then she gifted me a copy of her latest book, Stuck In The Middle With You: Parenthood in Three Genders! She was so, so nice and looked gorgeous in a long red dress.

+ Anthony Carrino and John Colaneri of HGTV’s Kitchen Cousins gave Lizz personal advice about how to best restore her old sewing machine. They actually offered to visit her home and do the project themselves, but I think they were kidding… which is a shame, because that would make a great DIY post here on Autostraddle, right?!

+ There were a LOT of dudes at the event and a decided lack of lesbians, and a GLAAD staff member told us that the organization had actively tried to get more high-profile lesbians to walk the red carpet this year but hadn’t been able to get anyone to commit — so this is a call to all the Bette-Porter-Power-Dykes out there, please attend the GLAAD awards next year — we are sorely lacking representation!

Let’s finish this with a bunch of extra photos, because why the heck not? This weekend Lizz taught me the phrase “fresh to death” and I’d like to go on record saying every single human at the event was indeed looking fresh to death, with the exception of a few select members of The Patriarchy who shall remain nameless. Overall I’d give the New York City 2013 GLAAD Awards five outta five stars. Next up: California! 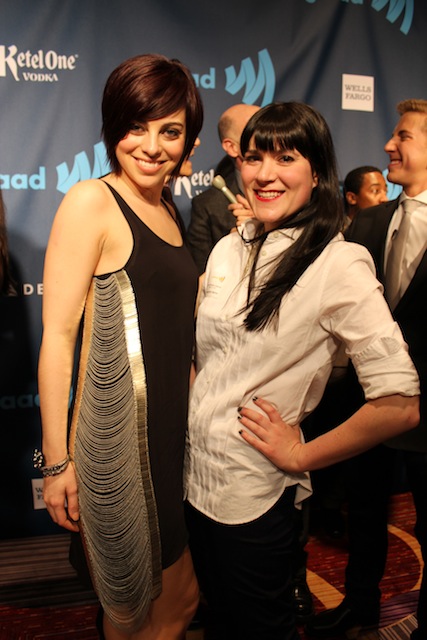 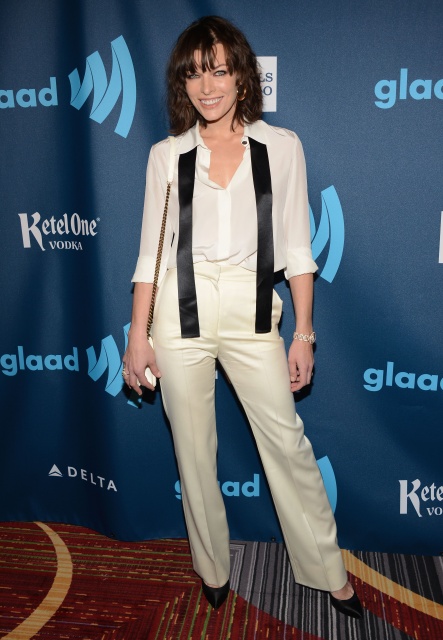 had to show you the entire outfit 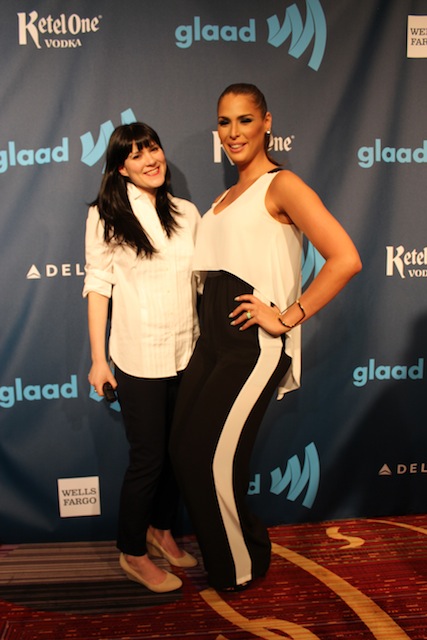 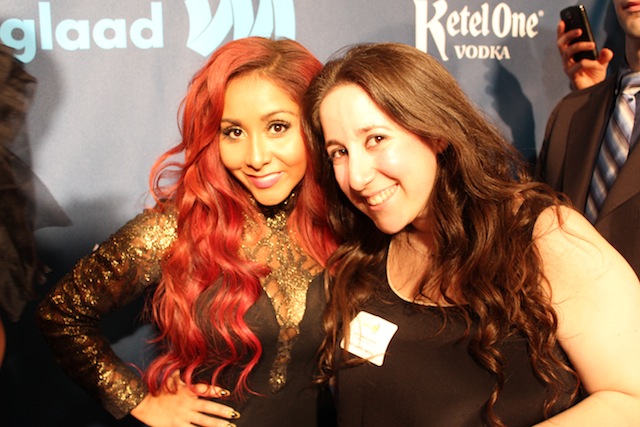 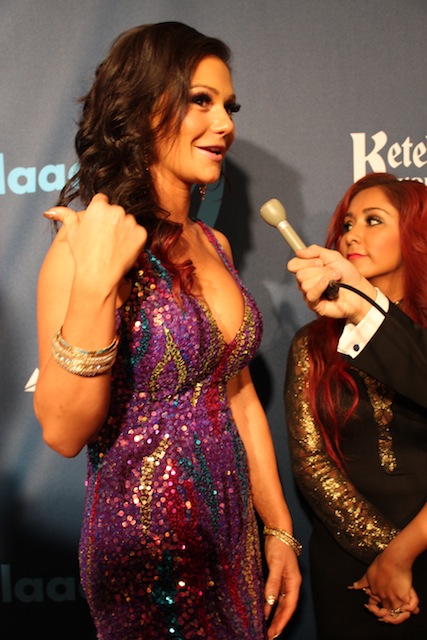 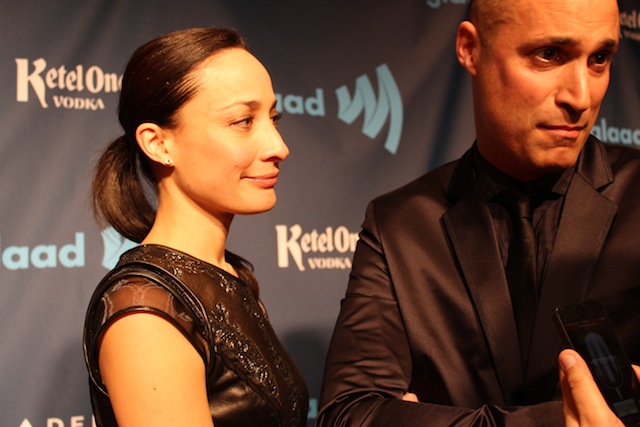 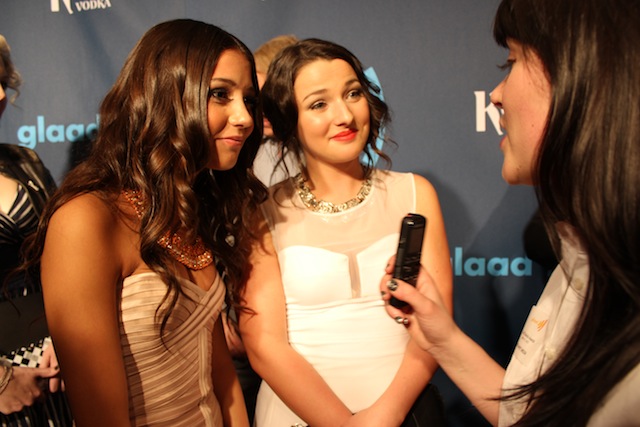 i had to throw in another shot of them, how adorable are they waiting to hear lizz’s intense interview question?! also gorgeous.
copyright vanessa friedman 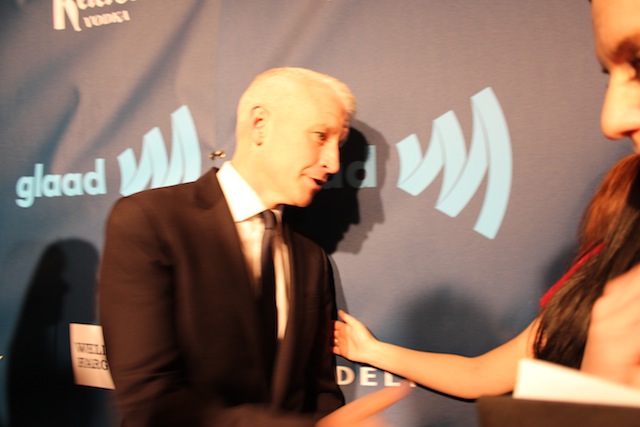 this is the best i could do capturing the silver fox — don’t be mad, i tried so hard for you guys
copyright vanessa friedman

Thank you and goodnight!

Vanessa has written 314 articles for us.