We weren’t the only ones impressed by Jazz — when we met Laverne Cox, transgender actress, producer and advocate as well as a nominee for Outstanding Film-Limited Release with her role of Chantelle in Musical Chairs, she told us that Jazz was the person she was most excited to meet at the awards. Cox was wearing a stunning shiny Guillermo Couture custom dress, with Christian Siriano for Pay-less shoes. “It’s a high/low thing,” she joked. “Pay-less heels with a couture dress!” 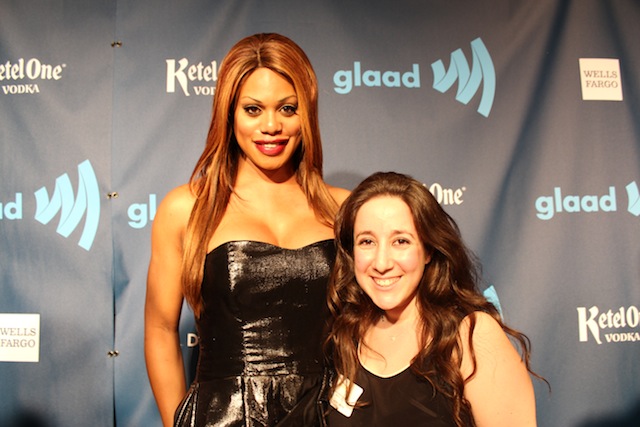 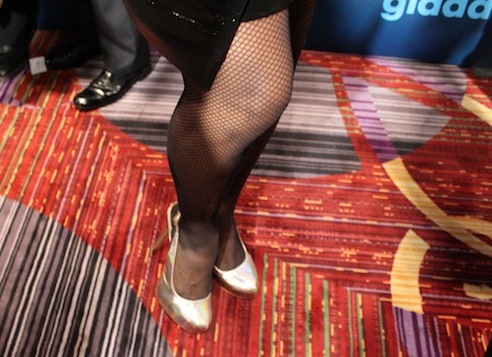 The Outstanding Film-Limited Release award is being given out at the San Francisco GLAAD show in May, so Cox could enjoy herself stress-free. She told us about her upcoming project, a new Netflix Original Series show called Orange is the New Black, coming out in June, and shared some of her makeup tips — “I love concealer and I love powder!” She also offered some advice to young trans* women about being comfortable with oneself:

Try and figure out what the truth of what you’re feeling is. Listen to yourself and listen to your feelings. That’s something that I continue to struggle with…to allow myself to have quiet moments where I can ask: What am I really feeling? Whats going on? What do I really want? I would encourage everyone to do that. And try to listen to those voices and let that guide you. 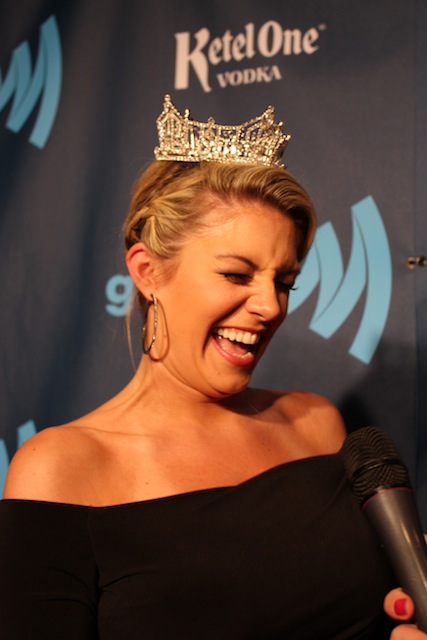 the vp of communications at glaad told us he loves autostraddle because we’re “hilarious” and it looks like miss america agrees, just sayin’
copyright vanessa friedman

I think people have misconceived notions about what it means to be part of the Miss America Organization. We’re a very open and loving community and we’re a huge family. I think it’s very important for me to be here to show that the Miss America Organization is evolving and that we are a huge supporter of everyone! Because we think that it’s very important to remain true to who you are and free to be yourself.

Also her manager/publicist/dude who followed her down the carpet was super intense and kept saying, “Just one question!” and we almost didn’t get to ask her anything at all but then Lizz was a total boss and just went for it so we worked really hard to talk to this gorgeous human for you, is what I’m saying. It’s because we love you so much. 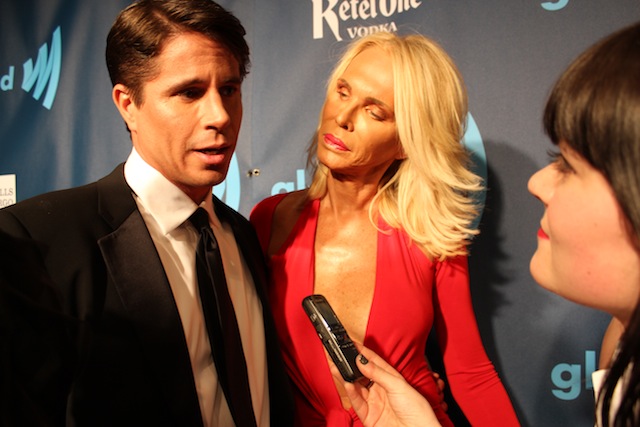 GLAAD President Herndon Graddick walked the red carpet with Lauren Foster, trans model and GLAAD Miami Leadership Council co-chair. He was one of our lengthiest interviews, and he was really positive and approachable.

Lizz: Can you tell me what was your most proud moment of this past year?

Graddick: You know the thing that I’m most proud of is the Miss Universe pageant changing their roles to allow for the inclusion of transgender women. Not just in the United States, but all around the world. I think that the Miss Universe pageant is the sort of apotheosis of womanhood and I think that the fact that they accept transgender women as the women they are really is a globally significant event.

L: What are you looking forward to in this next year, what GLAAD has on deck?

G: I want to get more transgender people on TV. I’m determined that we’re going to win the Boy Scout fight in the short order and finally change an archaic and bigoted policy that exists within the most revered of American institutions. I think it’s 2013 and it’s time for that to be over…I think we’re on the cusp of victory and everybody knows it.

L: What are you most excited for tonight?

G: It’s really hard for me to say. I’m so grateful to a lot of the people involved that it’s hard for me to narrow it down to one thing. Anderson has been a friend of mine for many years and I’ve always been a fan of his journalism. I’m very proud that we could recognize [his journalism] and I’m proud that Madonna can be here to present to him. I’m proud of the fact that if you look at the audience of the event tonight you’ll find executives from every news organization in the country and I think it’s a real indication that the LGBT rights movement has moved beyond a left/right issue to just an issue of human rights. And I think that ours is the human rights issue of our time in the United States and so to be a part of that is really humbling.

Graddick also gave a great speech during the actual show wherein he emphasized that “New GLAAD” is making trans* rights a priority and said, “We’re not just against something, we’re for something: equality.” We agree! 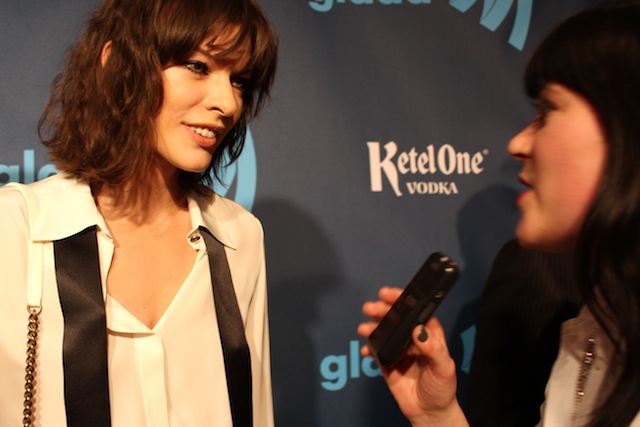 lizz basically told milla that she looked like she’d just finished having sex but lez be real, she kind of does look messy post-sex delicious and it’s really working for her
copyright vanessa friedman

Milla Jovovich looked incredible and is gorgeous and it was really tough to form sentences around her but Lizz did a great job and managed to be hilarious — “you look like you just finished getting undressed, but in a good way!” — and articulate — “What are you most excited about tonight?”

You know, I’m most excited to just really see a movement forward. Every year the GLAAD Awards take more and more steps forward and as a mother, I want to know that if my daughter in ten years time says, “Mom, I’m gay,” that she’s going to grow up in a world that’s going to accept her, that’s not going to discriminate against her, that’s gonna support her and treat her like every person in America and in the world should be treated, like a real human being.

Well okay excuse me while I go cry joyous tears of, “Wow, you’re such a good mom.” And while we’re on the Amazing Mom Of The Year theme, let’s chat with June “Mama” Shannon, Honey Boo Boo’s mom and nominee for Outstanding Reality Program with the “It Is What It Is” episode of Here Comes Honey Boo Boo. We told June that lesbians love her, per Fonseca’s request and also because it’s the truth, and she showed a mixture of emotions ranging from touched to bewildered. We also asked what she, as a mom, felt about the Boy Scouts of America situation currently dragging on and her answer made me fall even deeper in love with her: 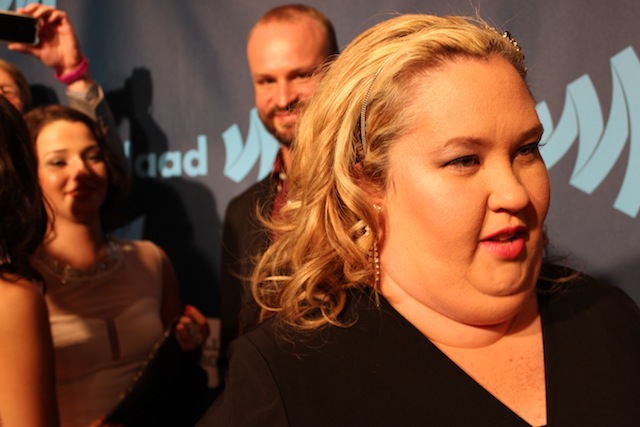 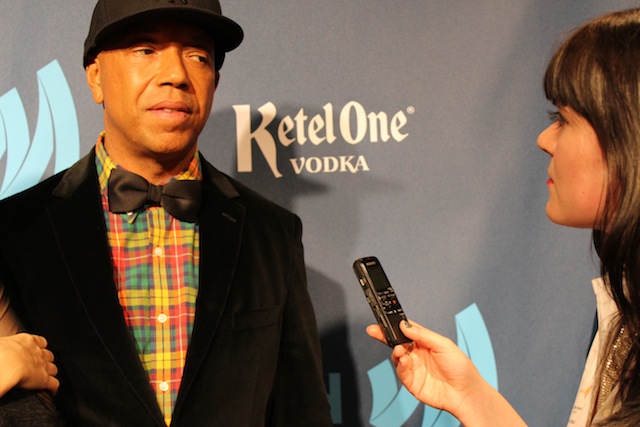 Lizz: You’ve been attending the GLAAD awards for years now. Why is it important to you to attend?

Simmons: I think it’s important to support everyone’s quest for freedom. If you want freedom for yourself, you have to give it to everybody.

L: You’re a huge figure in the music world. Where do you think the music industry is going in terms of accepting and promoting lesbian, gay, bisexual and transgender artists?

S: I think everybody can show up and use their celebrity if they can to give to others, and they should also show up with their money and the way that they vote, and the way that they treat other people, just in general, as individuals. What they do is a reflection of what the world does, as well. 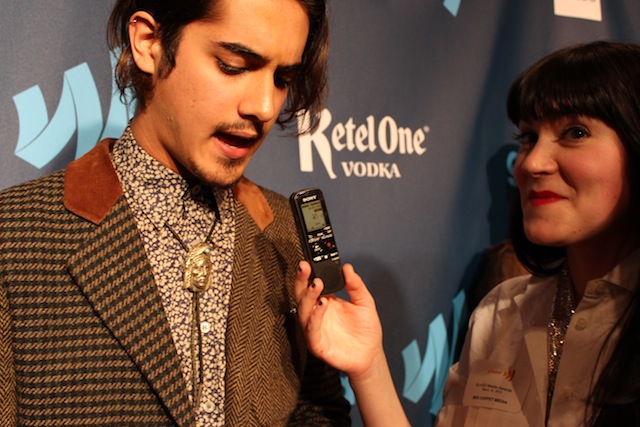 Lizz was very excited to interview Avan Jogia, as you can see in this adorable photo of her being adorably excited to interview him! He played Beck Oliver on Nickelodian’s Victorous, he’s starring in ABC Family’s upcoming show Twisted, and he co-founded Straight But Not Narrow with Josh Hutcherson, an online PSA organization in support of the LGBT community. Lizz asked what he was wearing and he didn’t know, but she helped him figure it out (Liberty Prints, fyi) and also asked him to tell us more about his PSA project.

It’s straight people talking to straight teens about their gay friends and basically works as a straight ally group. My philosophy is if your gay friend or a gay teen is being bullied and you don’t say anything, then that apathy is as loud or maybe even louder than the insults that are being thrown at this kid. And if you don’t say anything, that makes you a perpetrator, or a bully.

The point of Straight But Not Narrow is to combat apathy and silence in young allies. 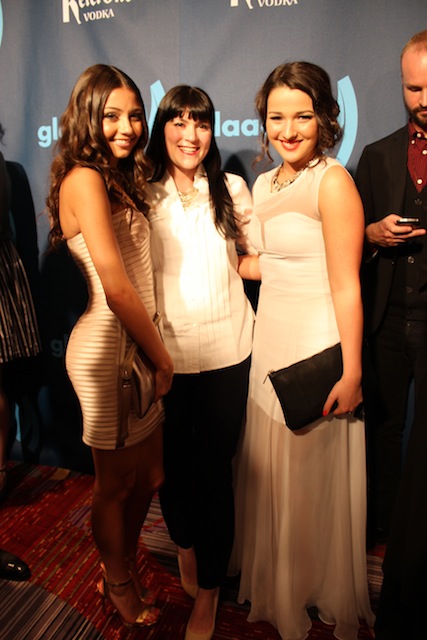 i loved the degrassi girls so much, not least because they’re canadian
copyright vanessa friedman

Look, real talk? Lizz and I liked every celebrity we met. But our absolute above and beyond favorites of the evening were Cristine Prosperi and Annie Clark. The pair play Imogen and Fiona, the lesbian couple on Degrassi (Imogen’s character is sexually fluid, Fiona’s is a lesbian), which was nominated for Outstanding Drama Series. In retrospect, I wish we’d asked the girls more hard-hitting questions on the red carpet; this is my major regret of the evening. I think both Lizz and I just got super tongue-tied and excited, so we stuck with pretty superficial questions — in case you were wondering, the girls were both wearing “BCBG head to toe,” and they went shopping for their dresses together. They both just shot new movies; Prosperi did Nicky Deuce, a Nickelodeon movie of the week, and Clark did a low budget indie thriller called Solo.

After kicking ourselves repeatedly for not asking more about their roles on Degrassi and how they feel they’re impacting LGBT kids, we ran into the girls at the after party and they continued to be total sweethearts. We’re keeping our fingers crossed that we can connect with them in the future and bring you an in-depth chat with them, because honestly, they’re gorgeous and funny and fun and gracious and I can’t say enough good things about them. And I swear it’s not just because they were fellow Canadians.

Next: Dispatches from the actual awards — AKA MADONNA TIME — plus bonus shots from the red carpet

Vanessa has written 322 articles for us.