When Erika Moen stopped writing DAR: A Super Girly Top Secret Comic Diary in 2009, I was heartbroken. I started reading DAR many, many years ago in college, when my straight guy friend sent me a link and said, “This comic makes me think of you because you’re a melodramatic lesbian getting over your first love, too” which is a really sweet thing to say, I think.

DAR was special to me right from the start. It was the first comic I encountered about being queer and crippling depression and falling in love with unexpected people and I still love every bit of it. At the time, I only read a few other webcomics that had nothing to do with lesbians, like Questionable Content (which, to its credit, does feature some lesbians but I think Jeph Jacques is kind of a jerk so).

Erika Moen’s sex toy review webcomic, Oh Joy Sex Toy is super fun and informative (kind of like her DAR guides to vibrators) and in May, she was gracious enough to talk to us about it and her new sex education book.

Since DAR, I’ve been trying to find an equally good queer comic to read, and I think I’ve found a few that come close. Here they are in no particular order.

(via Kate or Die)

Kate or Die is the adorable comic written by Kate, naturally. Kate uses the comic to talk about fun things like feminism and bisexuality and being young and confused and being overly excited about pumpkin scented objects (I feel you, Kate). Although she doesn’t update regularly, it’s a good comic to just get lost in, where you don’t have to follow super confusing storylines. It’s an immediate gratification comic. 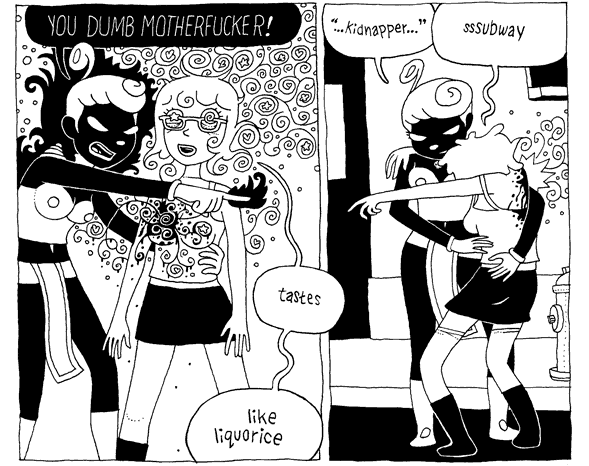 Curvy. (NSFW) You probably already know all about Curvy, but if not, I don’t even know how to begin explaining it to you. I started reading it because one of you told me to. There’s lesbian sex within the first ten comics. Go start reading it. The author, Sylvan Migdal, only writes in the about, “A sexy sci-fi adventure comic for adults.” Delightful! Did I mention NSFW? 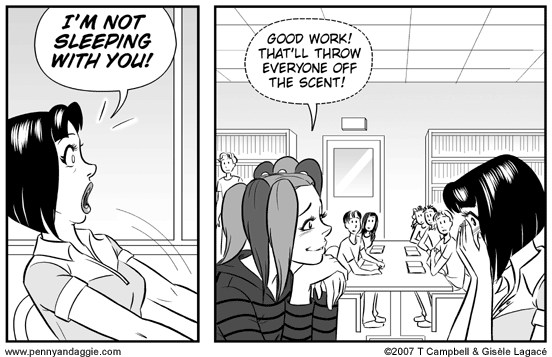 Penny & Aggie is one of those comics that is kind of meh until it gets super good. It’s the kind of comic where you just want the main characters to be in lesbians with each other already, and then a million other characters are also gay. If I could describe Penny & Aggie one way, it’s like if Betty and Veronica hooked up. There’s about two million pages of this one, so start now. 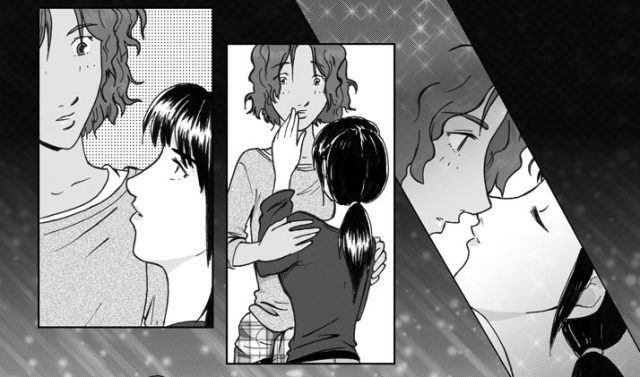 Red String is a manga-style story written and drawn by one of my favorite artists, Gina Biggs. I’ll mention here that Gina also runs Filthy Figments (NSFW), an adult comics site featuring only women artists, which I think is fantastic. Red String is mainly the story of an adorable hetero couple, but Gina does coming out and first gay love justice. The Hanae/Fuuko scenes are my favorite. It’s also a super long saga which started in 2003, but it’s ending mid-August. Ten years!

Amy T. Falcone is a pretty amazing person and this is her webcomic, Cardigan Weather. There aren’t many strips up, but what is on the site is written, drawn, and thought out very well. It’s obvious Amy has some feelings, but I like the little series of her explaining queerness to her younger self. Amy also co-creates [citation needed] and is coming out with a new comic soon called Clique Refresh (which looks super similar to the drawing style of Kim Possible or is that just me?).

(via Moon Over June) 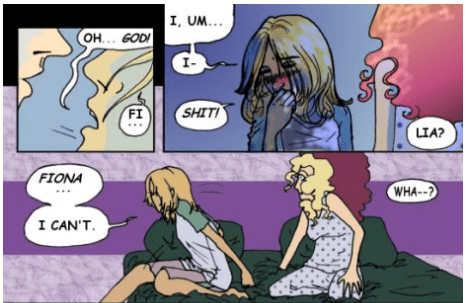 I know what you’re about to say. “This is the Megan Rose Gedris comic you chose? Over I Was Kidnapped By Lesbian Pirates From Outer Space?!” And to that, I say hells yes. Lesbian Space Pirates is an amazing comic that you should be reading, definitely, but  Yu+Me: dream is the most beautiful rosalarian work out there. It’s hands-down my favorite queer storyline-based comic. Told in a dream world, the comic’s style constantly changes and alters to fit the panel and chapter. All 847 pages are beautiful and worth the time you’ll spend obsessively reading the entire thing in one sitting.

Okay, what queer comics I missing out on?