Lez Try It is a column in which comedian and writer Allie Rubin picks one component of lesbian culture to try for herself. This month: making a cake that may or may not be a thinly veiled metaphor for one’s own stability, from the movie The Hours.

It is impossible to express how much I’m dreading trying to be funny during a pandemic that has left over 170,000 Americans dead. I’ve spent the past four months writing goofy comedic sketches that have unexpectedly turned into Lovecraftian short stories and pitching lighthearted jokes that have made other people say “Hey, are you okay?” My emotional state is so fraught that Mitski has temporarily been taken out of rotation on my Spotify account. These are unprecedented times.

Here’s what I did for Lez Try It: I made a cake. It turns out that when I first pitched some ideas for possible installments of this column all the way back in September (!), I added a few jokey ideas at the bottom of my list, including “baking a cake that may or may not be a thinly veiled metaphor for my own stability (based on The Hours)”. How cheeky! Past Allie probably typed that after a carefree evening of licking subway poles and open-mouth kissing strangers during happy hour. But by the end of March, my brain had collapsed into a slowly simmering stew of anxiety and despair – finally perfect, I thought, for an Hours-themed column.

There’s a scene in The Hours where Julianne Moore, a closeted queer woman trapped in a 1950’s heteronormative suburban nightmare prison, takes stock of her life and decides to make a birthday cake for her husband. She says, “I’m going to make a cake,” and she does. The cake is a disaster; the cake is a metaphor. I was 13 when The Hours was released, and I found it pleasantly overwrought then. I wonder what I would think of it now. I hope you understand that I don’t have the energy right now to rewatch a movie where a man dying from AIDS throws himself out a window. Luckily, like Julianne Moore, I have enough energy to make a cake. 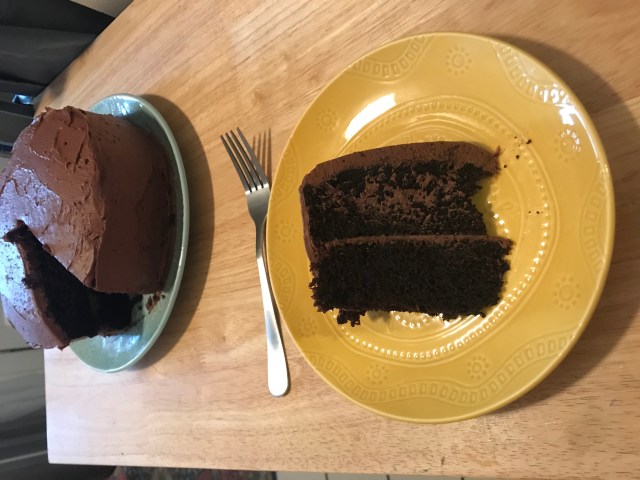 The cake I chose to make was Ina Garten’s Beatty’s Chocolate Cake, because times like these don’t call for anything but the best, most decadent chocolate cake. I see you with your Instagram stories of colorful salads and quinoa nests filled with whipped tahini and magical sesame birds, and I respond with appreciative emoji while I eat Doritos in the shower and wipe my fingers on a box of Girl Scout cookies. The comfort food keeps my spirits high and gives me enough energy to mainline another 14 hours of Survivor, which is all I have right now. “Jeff Probst is a queer icon,” I smugly tell my cat, Meryl. She rolls her eyes and goes back to sleep. We are stuck in this studio apartment together, and she hates my terrible opinions.

This cake is personal to me because it’s my mom’s favorite dessert. My mother is a health enthusiast who cherishes Sweetgreen more than at least one of her children, but she loves this cake. I try to make it for her birthday every year. The secret to this cake is a cup of hot coffee in the batter, Ina Garten whispers in her cookbook, which makes it moist and chocolatey without being so dense that you feel like you’re drowning in chocolate, Augustus Gloop-style. The first time I made this cake, my mom warned everyone that we couldn’t tell my father that there was coffee in the batter, because my dad is a notoriously picky eater who would rather fight a bear than eat a cake with coffee in it. So we all sat down to eat and my dad took a few bites of the cake, clearly enjoying himself, and then someone spilled the beans and said “I can’t believe there’s coffee in this cake!” and he immediately put down his fork and refused to eat the rest. “BUT YOU LIKED IT,” we all yelled. “I DON’T LIKE COFFEE,” he yelled back, and we all told him that he was being absurd, and we laughed, and then we yelled about something else, and then, knowing my family, something probably came dangerously close to catching on fire.

It’s a good cake — a great cake, even. I make it all the way back in April and eat it directly off the plate. The cake is tall and heavy and sits, covered in foil, in my fridge. I eat it on my birthday, which doesn’t matter but also does. I tell my mom I made The Cake and I can practically hear her eyes widen over the phone. “The Cake,” she murmurs, tasting it from 2,000 miles away. I don’t know when I will see my parents or my sisters again, and I still don’t know. This is the pinballing that quarantine brings. Some days I eat the cake in bed and write jokes about it, and other days I see the cake in my fridge and I want to throw up because I don’t know when I’ll be able to see my family again. I didn’t think I’d feel this way, and I’m surprised that I do.

The cake is easy to make. You make two layers of cake and cover them with a rich chocolatey frosting. The batter is going to seem pretty soupy, but it always turns out delicious and moist. As I frost the cake, I feel like Julianne Moore, just barely holding it together while I put on a brave face for my child, Meryl. “Your crumb coat is sloppy,” Meryl yawns, tired from a long day of eating expensive prescription food and screaming at birds. I make the cake, and I eat the cake. It feels good to put effort into something.

Trying to have perspective on this pandemic while it’s happening is a bit like trying to reflect on a mugging that’s happened to you while you’re getting mugged. “Where does this mugging fit into the story of my life? What does it say about society?” Motherfucker, who cares? You’re getting mugged!

My biggest takeaway from this column is that I don’t like eating cake alone. I like to celebrate with other people, and I like to bake for other people. Slowly hacking away at the increasingly stale cake in my fridge filled me with dread. If I had rewatched The Hours, this is where I’d probably quote Virginia Woolf and make some kind of incredibly profound point about community or sadness. I didn’t rewatch The Hours, so I can’t do that. However, I did watch four seasons of Top Chef in one week. It didn’t teach me anything important about life, but it taught me a little about scallops. Did you know Tom Colicchio hates okra?

As quarantine continues, I find myself thinking a lot about The Hours. I think about how Julianne Moore bakes the cake. She hasn’t planned for this to be her life: it’s happened to her. Later, she abandons her family. She makes the choice, she breaks free, and later she can see that it was the right one. Right now, I have no control. Living in a crisis doesn’t afford you any perspective. Am I making the right choices? Is it going to be okay? It’s impossible to know right now. I can only control the things I can control. I can go for a long walk in the cemetery; I can tell my cat she is my precious angel baby and not care when she rolls her eyes at me. I can listen to Fiona Apple and call my friends. I can make a cake. I am going to make a cake.

Join A+
Related:dessertlez try it