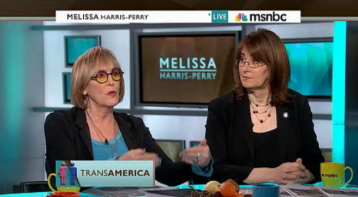 We’re only about 30 seconds into MSNBC’s 20-minute “Transgender in America” segment when host Melissa Harris-Perry describes herself as “cis,” explaining that “cis” means that “the sex of the body I was born with, the gender I was assigned at birth, and my personal identity all match. She then pointed out that “being ‘cis’ does not make me “normal” or “natural,” it just makes me cis.” After last week’s shitshow with Barbara Walters and Jenna Talackova, the last thing anybody expected from a mainstream (if left-leaning) news organization was to hear the definition of “cisgender” on National television. It gets better from there.

The National Center for Transgender Equality, in its press release, said of the MSNBC program that:

“For the first time in recent memory, a major television network will dedicate an hour-long panel to discussing transgender social and political issues. NCTE Executive Director Mara Keisling will be a featured guest on the show joining other recognized experts on trans issues. The panel will focus broadly on advancing transgender equality and other political issues.”

“When we see transgender people like Chaz Bono or others in the media, we’re often encouraged to see the spectacular, not the person,” Harris-Perry explained before introducing three guests: author and activist Kate Bornstein, the aforementioned Mara Keisling and Mel Wymore (a Democratic candidate for the New York City Council). She later brings out Allison Kilkenny of Citizen Radio who also chimes in on issues within the LGBT community that don’t really apply to the “T.” The importance of non-discrimination policies were addressed at length, including the Prison Rape Elimination Act, as well as the importance of inclusiveness within the LGBTQ community. They went into how issues like same-sex marriage and Don’t Ask Don’t Tell have very different impacts on different segments of the LGTBQ umbrella and how crucial it is that the LGBs understand that.

After going over some of the harrowing statistics about discrimination against transgender people in housing, employment, school and the criminal justice system, the story of African-American transgender woman Crishuan “CeCe” McDonald is introduced. CeCe was, as Kate Bornstein describes it, “beaten savagely by a group of folks and she fought back and ended up, in self-defense, killing one of her attackers. She was charged with second-degree murder, and put in the slammer, and that’s that.”  Harris-Perry compares CeCe’s situation to that of Trayvon Martin and Kate mentions the online petition that you should all sign to get her out of jail.

The ensuing 15 minutes, which were devoted to discussing the Obama administration’s refusal to sign the executive order against discrimination by employers with federal contracts based on gender identity and sexual orientation, which Jillian T.Weiss writes about on the Bilerco Project today.

All-in-all, a pretty solid program and an excellent antidote to the Barbara Walters situation. (Although I was a little surprised by the section where Kate and Melissa seemed to imply that most trans people don’t use/like binary-identified pronouns — what did y’all think of that part?)  In response to the Jenna Talackova 20/20 interview, many hoped that the sort of horrifying way in which that was covered would at least open up a door to discussing trans issues in a more serious and less sensationalistic way. This piece would suggest that the door is opening, and that people are walking through it. And that’s pretty fucking awesome.