When I was a wee lass, my only requirement for a meal was that it had to consist of mostly white food. In retrospect, I’m sure my monochromatic diet was at least partially responsible for my infamous mood swings that caused my mom to carry around a banana — the EpiPen of people allergic to sanity when they’re hungry — in her purse that she could force-feed me when I got nasty. Carbohydrates have a tendency to suddenly and unexpectedly abandon the bodies of 12-year-olds with overactive metabolisms.

As a wee adult, my palate has somewhat expanded and my idea of what makes something worth eating has certainly changed. Pasta is still my go-to food, but now I like decorating it with more than just butter and salt.

For the sake of my stomach and my relationships, anything I cook for dinner has to:
1. Take less than 20 minutes to make
2. Use less than two pots or pans that require cleaning afterward
3. Have something green in it
4. Keep me full for at least an hour
5. Primarily come from somewhere other than a box
6. Taste good the next day

This pasta bowl satisfies all six of my conditions and is deliciously springy. My recipe is enough for one person, but it’s stupid easy to double or triple or just make for everyone you know. 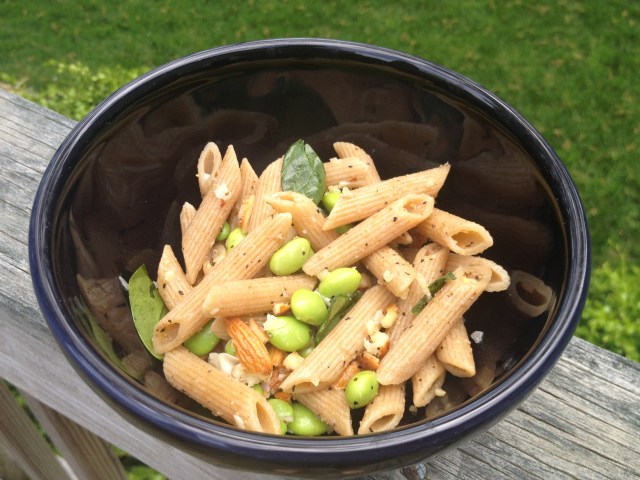 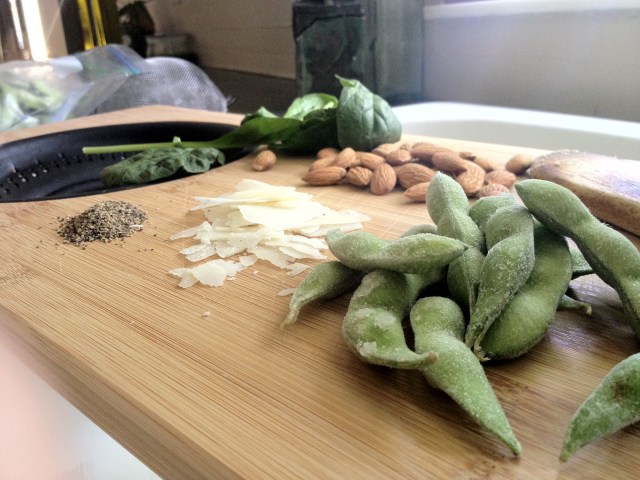 1. Bring two pots of water to a boil, then add pasta to one and edamame to the other. The edamame will only have to boil for 2-3 minutes while the pasta’ll take 9-11, so you’ll have plenty of time to get everything else ready while your pasta cooks.

2. Pop the edamame beans out of their shells, but be careful not to burn yourself; that stuff is hot! Slice or rip up the basil and spinach, mince the garlic, grate the parmesan and set all that stuff off to the side.

3. Put your almonds in a paper bag and hit them a couple of time with a rolling pin, beer bottle, or whatever else you have around. Toast them in a skillet with 1 teaspoon of the olive oil for about 2 minutes and then remove the pan from the heat. Throw in the garlic so it can cook just a bit before you eat it. This’ll remove some of its sharpness so it doesn’t overwhelm the whole meal.

4. When the pasta’s done, toss it with everything along with lemon juice and the rest of the olive oil, season it with salt and pepper and eat until you’re content.