OMG Autostraddle exploded with comments this past week! Everybody and their homophobic neighbor had feelings to share during our Maine & Washington Gay Marriage Election Day “Live-Blog”! (We may have lost some civil rights, but we totally came out on top in terms of OH SNAP! comments.) While so many of you were heartfelt, and poignant, and amazing, and we love you… we’d like to bring a little levity this Friday, since we’re all still reeling from the election results (and the World Series).

There were many joyous things worth celebrating this week, like the helpful lesbian hints/humor offered in How To Pick Up Chicks: A Lesbian Guide to Getting Girl-on-Girl Action, and the lucky Autostraddlers named in Tegan & Sara ‘Sainthood’ Winners Announced! (Even those who didn’t win can appreciate the adorable announcement video by Intern Hot Laura.) This was also The Week The World Discovered the Awesomeness of Gay Halloween, and I finally got to reveal a girlcrush I’ve held onto for 10 years. You take the good; you take the bad; you take them both, and there you have… this week’s Commenter Awards.

Your Life Is Now Complete Award goes to nosidam on Autostraddle Reader Rewards: Hey Did You See That Comment Friday!: “I feel like my life will be complete when a comment on the “comment friday” post becomes one of the chosen comments for the next week.” 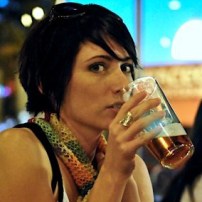 BONUS Laniea FTW Award to Rach on Maine & Washington Gay Marriage Election Day “Live-Blog”!: “You know, all of us would love to be stranded on an island with Laneia. I guess we’ve got something in common after all! I mean, when you take the away self-righteousness, bigotry, and small mindedness – we are able to find some common ground with each other at the end of it all: We all think Laneia is hot.”

Science Fail! Award to Natasha on Where Are All The Lesbian Sex Blogs? It’s NSFW Sexy Sunday, B*tches: “If only Shannyn Sossamon and Angelina Jolie could have a kid… I’ve always hated science”

Good Enough To Eat Award to Saphicsass on You Got 7 Hot (Openly) Gay Actors? We Got 9 Hot (Openly) Lesbian Actresses. BAM.: “They are like a little debbie twin pack of gay magic but instead of being filled with cream or chocolate they are filled with the dreams of millions of lesbians worldwide.”

We’ll Get Right On That Award to Alex! on Kristen Stewart’s Lesbian Talk Is Surprisingly Subversive: “Quick! I vote an intern should jump her bones and report back. And by her, I mean Kristen Stewart, clearly. Actually… any of the women in this post would be fine.”

Hands Full Award to Vikki on Gay Families Are So Special Yet SO Just Like Us, Aren’t They?: “Thanks to Autostraddle I have to add “Boob Vigilance” to my daily list of things to do.”