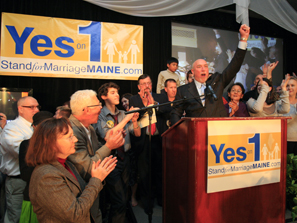 We were live-blogging the election last night so that we could all share in the joy together. Unfortunately that joy was ripped from our little innocent homosexual hands when nearly 53% of Maine voters voted to repeal the law granting same-sex marriage, with 47 percent opposing.

This was a big letdown, and hopes were high going into the race. Early returns boosted our morale and made us optimistic, but the last votes coming in were mostly for the other site. Maine seemed winnable for a lot of reasons. Firstly, it’s pretty small, upping our ability to do the most effective type of campaigning — getting ’em face-to-face. It’s also a liberal state and No on 1 managed to raise more money than Yes on 1, though it’s worth noting that Yes on 1 crushed the No People with out-of-state funding.

The race was tight all night and the No on 1 effort was applauded for not making many of the mistakes made by California last year, when Prop 8 won and Obama won and we didn’t know if we were supposed to feel happy or sad.

There are still 100,000 absentee votes to count and we lost the vote by a very small margin. We’ll let you know if we hear anything definitive about a recount. Open Left says the campaign managers will discuss in the morning:

This’ll be the final update for the night. Things are, to put it plainly, looking slim … The No On 1 campaign manager, Jesse Connolly, just went down with us to the ballroom and announced that the race is too close to call and they are still counting. The counting could continue well into the morning. There will be no concession or declaration of victory, it appears, tonight. Things are extremely tight and no news media so far has called the race either.

There was good news in North Carolina and Houston, as well as in Washington, where Referendum 71, the “everything but marriage” bill, has been approved! It was approved by a VERY NARROW MARGIN however, so stay on your toes. We gotta keep fighting, is 76% of Americans approve of something similar to marriage for gays, we should be doing much better than that!

So, what’s going on? America has become its own worst enemy! Our Founding Fathers had ideas about freedom of speech and religion. The idea, as rocky as it was in a far more segregated society than we have now, was to protect people from inequity and oppression. Citizens would be free and equal, secure in their independent and ineffable right to life, liberty and the pursuit of happiness.  Now those very freedoms created to protect the little people have been co-opted by the Wrong People With Power and that theft has turned America into a refuge and breeding ground for extremist religious socially conservative twatwaffles.

For a system built on ideals, I think we can say that the system is corrupt? Of course our lives here are far better than life in most countries on this planet. But we seem to be the only ones confused about the “character” of the place we call home. Denial much?

“Gays are not oppressed on a whim, but because of the specific need of capitalism for the nuclear family. The nuclear family, as the primary — and inexpensive — provider and carer for the workforce, fulfilled in the nineteenth century and still fulfills an important need for capitalism. Alternative sexualities represent a threat to the family model because they provide an alternative role model for people. Gays are going to be in the front line of attack whenever capitalism wants to reinforce family values.”

Last year Obama won the election. This year he could’ve done something for us and he didn’t.

See, it’s not just abut marriage. It’s about the conversations that we’re forced to engage in — the bigotry and hatred and homophobia and xenophobia thrust at us sanctimonouisly because the haters know they live in a country where their intolerance for us is endorsed by the government we all live under. And the government is in charge. The best opponent we’ve had to the government’s endorsement of “separate but unequal” is The Media, but ultimately the media, obviously, is not in charge.

That being said there’s still hope, y’all. We keep fighting because we win more people over every time. The margin was much slimmer this year than it was in California. We have a serious disadvantage b/c there aren’t that many gay people in this country, or in the world even. Somewhere between .5% and 4% of the US Population identifies as lesbian, gay or bisexual. In contrast, 14.8% of Americans are Hispanic or Latino alone and 13.4% are African-American.

In the mean time, we do need to support one another as best we can! If the government doesn’t have our best interests in mind, we need to watch out for each other; supporting women and gay owned businesses, being nice to each other on the internet, helping other women and lesbians to succeed instead of being Lobsters, and cultivating the supportive friendships and environments where women can feel comfortable being themselves and eventually come out to those who they know, and who know them. Because that’s where the most change happens, but it’s the hardest action of all.

We need our voices to each other to be so strong and so powerful that we’ll be capable, sometimes, of not even hearing the voices from above that want to keep us down. The fight is slow but we’ll win someday. Or we might as well believe that we will, ’cause then we’ll be a lot happier.

“The dreams of the left are always beautiful – the imagining of a better world, the damnation of the present one. This faith, this luminescent anger – these are worthy of being called human. These are the Beautiful that an age produces.”
— Tony Kushner