This week was May 4th. May the 4th. Star Wars Day! I had a job interview that day. Now, I don’t want to say the Force was with me and jinx it or anything, but I DID just get called back for a second interview, so I’m not saying the Force was NOT with me, ya know.

Stef’s dedication to keeping us updated on the life and times of Kristen Stewart is unparalleled.

The lesbian travel company Olivia and Autostraddle are joining forces into a ball of amazing that is beyond words. Does this mean bear onesies on the beach? Probs!

In the installment of “Follow Your Arrow” that I’ve been waiting for, Beth interviews Mary Tully, dog trainer. There are dogs involved. Need I say more?

Riese can’t dance, but we love her anyway.

Carrie has thoughts about her tattoo.

Erin clearly missed her calling as a network executive for TLC this week when she came up with several ideas that are way better than My Husband’s Not Gay.

On You Need Help: What’s a Reasonable Reason to Dump Someone?:

On Top 10 YouTube Videos That Did Not Teach Me How To Dance:

The Inquiring Minds Award to Chandra:

On Also.Also.Also: Label-Free Fluidity is the New Chill and Other Stories You’ll Live Through:

The K-Why? Award to S Casey:

The Whip It Award to Avawn Alvear and Lex: 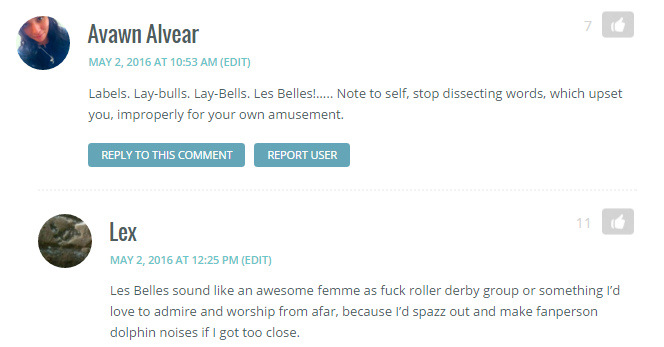